We’ve always loved Hull, after all, it is where we started. With the City of Culture celebrations looming, it’s important for Soundsphere to get as involved as possible with the many great bands, creatives and talents as we can. Recently, we managed to catch up with Hull 2017’s Digital Content Producer, Eleanor Churchill (who also plays drums in two-piece sister doom rockers Chambers) to chat about her kick-arse job role, music, and more plans for the city. 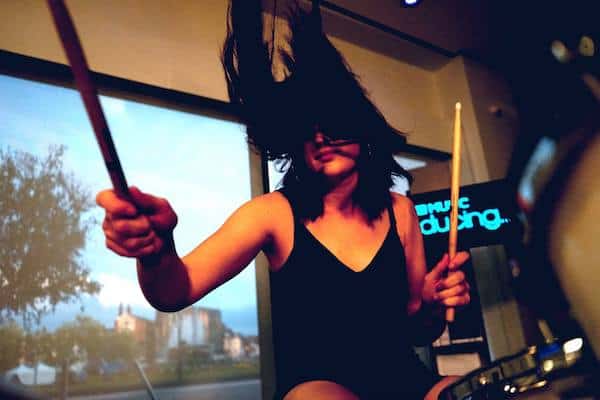 S] Tell us about your role?

I’m a Junior Digital Content Producer at Hull 2017. I’m basically a writer, although my role is fairly varied and involves many other digital aspects. It mainly consists of interviewing all the amazing people who make up Hull’s creative community and who are actively involved in the Hull 2017 programme. I meet a whole bunch of inspiring people… there’s just so many of them!

S] What are the biggest challenges for the City of Culture team?

I think a definite challenge is that Hull already is a City of Culture and the city has already created a creative community who actively support each other. The City of Culture is there to promote Hull to a wider audience and not to step in and take credit for something which already exists. Hull 2017 will give Hull the opportunity to gain the recognition it deserves – it’s a proud city and rightly so – I’ve never experienced another city like it.

S] What are the best musical ventures coming out of Hull right now?

There are so many. They sort of roll into one gigantic ball of musical goodness. There’s an absolutely incredible heavy rock/punk scene in Hull that I can’t get enough of. Bands such as No Nothings, Dead Hormones, Vulgarians, Sex Injuries and La Béte Blooms get me excited, but there’s simply too many to name. I’m also really into the folky vibes of Crooked Weather and the rapper Chiedu Oraka at the minute – completely opposite ends of the musical spectrum but just as lush as each other.

Personally, I’m more into my heavier music but what I love about bands from Hull is their passion, you can see it when they play. There’s something about this town that excites me a lot…it always feels very electric to me and I’m really proud to live here and be a part of that scene with my own band, Chambers.

S] Hull’s music scene seems to be well connected to cities like York and Leeds, would you say it’s important for Hull to learn from the success of these cities when it comes to getting tourism, and within the arts?

Hull is it’s own thing, let’s face it – there’s a real sense of individualism here that you don’t see in other cities which I feel is really special, it should never let go of that. I think because Hull has created such an amazing creative community, it now comes down to exposing it and give it the recognition it deserves to a wider audience – what’s not to love about a passionate creative community?

I think Hull can learn in some ways by not being afraid to put themselves out there to a wider audience, but at the same time, other cities can learn from Hull’s ability to have created such a tight knitted and inclusive community. In cities such as Leeds – everything can become very mad and cliquey, there doesn’t seem to be an ounce of that in Hull. It’s more about supporting creativity rather than constantly competing against others.

S] How can people get involved to support the work that the city of culture team are doing?

Many, many ways. If you head to the get involved section on hull2017.co.uk, there’s a fab volunteer programme, a community brand and business club people can get involved with.

Digitally, we’re always looking for editorial ideas for the discover section on the site. Whether it’s an interview with a local artist or a promoter looking to reach a larger audience for their upcoming event, people just need to email [email protected] with their ideas. We check and consider everything and try to push out as much as we physically can.

Generally we cater more to the people of Hull, but this is Hull UK City of Culture 2017 – so input and editorial ideas from other cities are important too. People can also use our events form to submit an event that’s happening in Hull, just hit us up!

For more information, and to get involved visit the link: https://www.hull2017.co.uk/getinvolved/