So, we had a few people swarming over Slam Dunk Festival this past weekend. We saw some fantastic bands, and we’re really proud to be associated with the event. Slam Dunk presents a hardcore mix of punk influences and a whole heap of energy and diversity. We caught some of the best artists in action including Reel Big Fish, Hellogoodbye and Weerd Science. 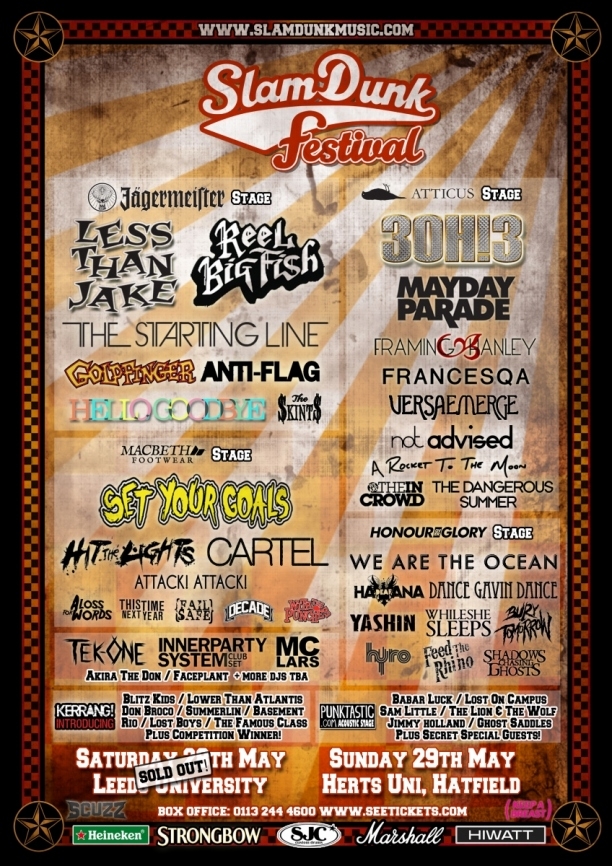 Lou’s take on the day…

Zoom back to 2006 and Slam Dunk Festival was a mere speck of power-pop-punk fury on the UK festival circuit: Leeds Millennium square, one stage, seven bands, lots of rain and a festival not to be missed. With small but perfectly formed pickings of Hellogoodbye, Capdown and Fall Out Boy it was a festival one step ahead of the rest, bringing the best in emo, pop-punk, alt-rock and ska music to an audience of a handful of in-the-know students. Undoubtedly, this can be chalked up to having its roots in weekly Slam Dunk club night held at the Cockpit where the ska kids would be kicking their feet (and pigeons) until the early hours and the best in new music was found long before the trends were set.

Take a trip five years into the future and who would have thought that this small scale punk rock festival would have grown so rapidly: June 2011 and the Slam Dunk take over has stretched further than the Leeds University’s six stages and spawned a counter part in the South at Herts University; to wake up the middle they’re letting all hell break loose in the new location, Birmingham HMV Institute as well.

So what did this year’s festival have to offer? Only the hottest of the world’s acts naturally – no wonder the Leeds site sold out instantly! The highlights were in plentiful supply and the lowlights were simply the inability to see every band we’d have liked to from the stellar line up the Slam Dunk crew have worked year long to secure.

We Are The In Crowd brim with energy for their early o-clock efforts on stage and whilst the Paramore comparisons might flow off of the tongue all too easily they do bring to the stage a fresh energy which trademarks the feel-good fun that those Fueled by Ramen acts generally are. Their original numbers garner oodles of respect and applause from the crowd which unfortunately, is all too easily lost with a cover of ‘Love Story’ by Taylor Swift.

Having opened the first Slam Dunk all those years ago it seems only fitting that Hellogoodbye take a slot on the main stage on their return. They warm the crowd up with some new songs but ultimately taking it back to 2006 was the answer with ‘The Square’, ‘Baby It’s Fact’ and ‘Here in Your Arms’ being the songs the audience really bouncing off the walls for.

With a damp start Not Advised took a while to warm up their vocals, their sound and the crowd but when they did they were on fire. A mix of the best of the best, sounding a little like Yellowcard, a little like the old-school punk-rockers A and a lot of originality as well! Their energy was electric, practically sizzling with the influences of 90’s pop, pounding drums and sing-a-long choruses which the crowd were only too pleased to participate in. ‘The World’s Not Ready’ you say? I think it is. 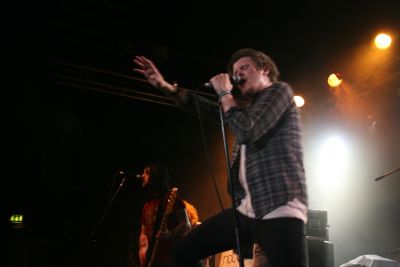 VersaEmerge are hot topic for Slam Dunk this year with a promo beast behind them and a unique blend of all that is good in the music world at the moment; a feisty front woman with vocals that veer from the soft and sexy in ‘Fixed Up Zero’ to aggressive and angry. The band is both sparkle and spunk rocking the haunting guitar sounds, explosive drums and fist pumping melodies. Dogged by poor sound and quiet microphones they beat the technical glitches and regardless, gave a show high in octane – these guys are definitely ones to watch.

Having toyed with the idea of a 2011 reform after their “break” initiated back in 2008 the eager crowd are braying for The Starting Line. The questions doing the rounds are whether this is just a fun one-off or whether this would be the start of something new are swiftly answered by Kenny introducing new material. Enthused and infused, these guys are officially back with their happy blend of passionate, earthy, power-pop which has the Slam Dunk masses pogo-ing into the rafters.

The promoters had obviously underestimated the pulling power of post-punk-laptop-rock (self-labelled of course) for the festival special, sardine effect that MC Lars and tour companion Weerd Science were rocking on the small stage. Sampling some of the best of Nintendo, Supergrass and Zebrahead, Lars belted through some of the favoured hits to an audience armed with an arsenal of lyrics. Ever the generous soul, Lars gave the stage over to Weerd Science for a couple of his new tracks from the ‘Sick Kids’ album but ultimately it was ‘Signing Emo’, ‘Mr Raven’ and ‘Download This Song’ that laid down the accolade for this shady MC.

Renowned for their catchy, sing them loud and sing them proud pop-punk tracks, Hit the Lights blast through a lengthy set of the greats including ‘These Backs Are Made For Stabbing’, ‘Body Bag’ and ‘Until We Get Caught’. With the given ability to get a room full of people dancing, bouncing and running in circles as if their lives depend upon it, they’re as polished on stage as they are on disc. For the audience of Slam Dunk Leeds, these guys are a force to be reckoned with – catchy songs which will leave you with a smile on your face for the rest of the evening! 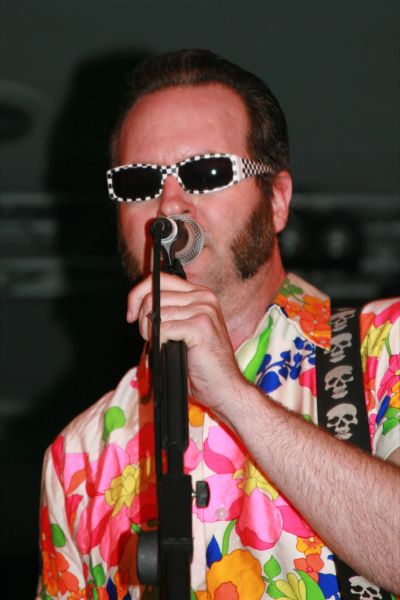 The evening ended for much of the crowd with a selection of Hawaiian shorts and shirts, multi-coloured punk hair and sunglass toting – it’s the now legendary festival classic Reel Big Fish. The Slam Dunk audience should be exhausted by this point in the day but no, they are jumped and pumped for a set full of the favourites, this band really delivers. They are of course the ultimate party band – you know they would show up with the beer kegs uninvited and have everyone shaking their thing and grinning from ear to ear. Responsible for the largest of circle pits and for playing Suburban Rhythm and its many styles on repeat, this band can run through the song ‘Beer’ three times without complaint from the audience. Instead, it is welcomed with with the excitement as if they were hearing the song for the first time each time. [LK]

A pick of the best…

There was hardly any oxygen left in the room by the time Cartel started playing, let alone once the dancing started; the room was jam-packed with fans from the very beginning of their set, which is impressive considering the competing bands on at the same time. This, along with the fans’ exuberance, is a possible explanation for the band members’ constant smiles. The lead singer, Will Pugh, sang flawlessly and beautifully, conveying intense emotion in the songs, regardless of what riff was being played behind him. The band were clearly in sync and well-rehearsed, giving an excellent performance overall. [AR] 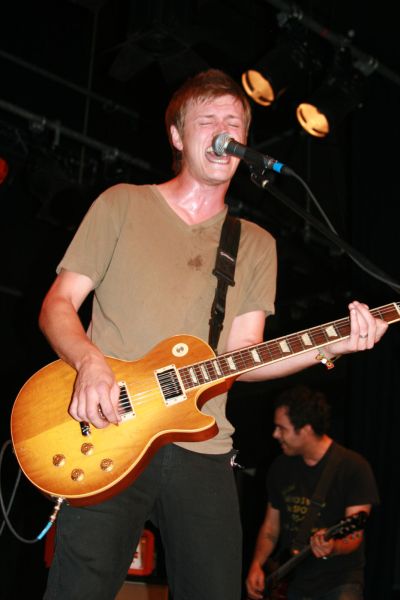 After waiting for the roadies to finish setting up, the band were late on stage, (by no means comparable to Axl Rose’s standard), so the crowd were still revved up and waiting patiently for Nixon’s seriously impressive vocal talents. The band without any doubt were taking pleasure in every moment on stage, enjoying the attention and being complete crowd pleasers, making a good show. Throughout their performance there was a strange effect on vocalist  Nixon’s microphone distorting his voice a little bit, though the volume level ratio between vocals and the melody was perfect. His voice sounded in very good shape, particularly considering how he bounced impeccably between screaming and singing. Overall it was a very energetic and showy performance; a lot of fun. [AR]

The multitudes turned out for Francesqa, a band comparable with You Me At Six, eager to hear them perform live. It seemed that everyone was enjoying themselves, the band and the crowd, but particularly the dedicated fans, singing along to every word there was; the band could’ve had an amateur choir backing them and there wouldn’t have been any difference. The drummer, Warren Senior, was hammering at his kit so harshly that it was striking (no pun intended)! Such enthusiasm seemed to be a key in the audience enjoying their performance, when the vocals seemed drowned out by the volume of the melody, but still, the audience knew exactly where they were and sang along heartily. [AR]

The punk-rock Hertfordshire four-piece Lower Than Atlantis were a real highlight of a string of acts at the Kerrang Introducing Stage at Leeds’ Slam Dunk festival. After a couple hundred festival goers piled into the cramped, underground room, and the band had modestly set up their gear on the small stage, the show began. Opening with the “hit” in their arsenal, the raucous ‘(Motor) Way Of Life’ the room instantly ignited with a high octane energy, with the crowd bouncing to the rafters. Mike Duce’s piercing vocals; Eddy Thrower’s pounding drums, Ben Sansom’s vigorous guitar playing and Dec Hart’s enthusiastic bass reverberated through the room. As Duce even remarked, the show was amazing and a far cry from playing down their local pub to ‘three people’ as he also stated. As the show went on, playing other stand-out songs such as ‘Deadliest Catch’. Playing on an “Introducing” stage seemed to beneath these guys as they commanded a singing crowd into swirls of thrashing and hedonism. The band, clearly loving the energy joined in, confidently throwing themselves around, whilst still with instruments and they revelled when the pumped up audience did the same. At no point did their half-an-hour slot dip, and they should be proud of their heart and soul-tugging personable showcase. These guys are defiantly ones to watch if this show is anything to go by – the adrenaline filled crowd leave soaked with sweat and converted to this monster live band. [LC]

A band with incredible passion and gusto that has clearly been growing over the years, they gave a polished performance, as one would hope for with a band being together as long as they have been. They knew all the ropes; how to please the crowd to the max, while maintaining the high level of performance. There wasn’t longer than two seconds without at least one member of the crowd – while beaming – crowd-surfing to the front to get more air at the sides; overheating in such a massive, constantly dancing crowd was bound to happen, and there were plenty of bouncers there to receive them all. Not many bands could make covers of Spongebob Squarepants and Scooby Doo sound stylish, but Less Than Jake definitely managed to. The audience loved them and they loved the audience; a perfect combination. [AR] 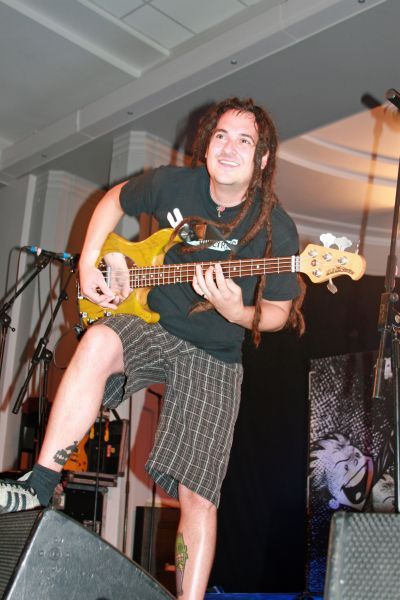 As a last minute replacement for Attack! Attack! in the line up, only arranged the night before, many people went to the stage, expecting a different show completely. Even when they realised it wasn’t the band they wanted to see, the crowd stayed because there was definitely something to be said for Paige; a band with a zest for performing and a real ability to engage the crowd. The keyboardist was the most energetic; for someone who plays an instrument that remains attached to the floor, he was all over the stage between his contributions to the melody, engaging the band and the crowd. [AR]

A day to remember – Slam Dunk we applaud you, bring on next year!