In our latest Event Review, Sam Herbertson looks at some of his favourite bands from Damnation Festival 2012 in Leeds. 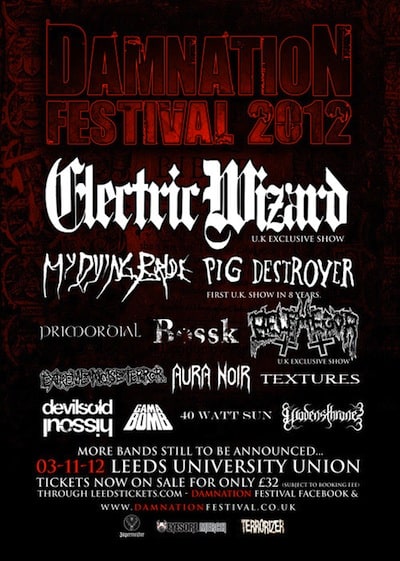 Witch Sorrow start things off for us, and they are a hard one to write about, considering you can’t help feeling that you’ve heard all this before. Then again, is that always a bad thing? A competent romp through the well-trodden fields of stoner pagan metal, it’s good and certainly fits the Pagan-esque theme of this year’s Damnation, it’s just not that original or interesting.

Pig Destroyer follow next, and we get exactly what we want. This anarcho-punk attack on the senses is completed with a terrifying overload of samples and soundbytes. How much you like this will depend on how attached you’ve become to working eardrums. Afterwards, the delightfully named Atrocity Exhibit make (as expected) lots of noise here, combined with talented and tight musicians. The only thing missing is perhaps the most important factor, the hook. I just can’t work out what these guys deliver I can’t get from a plethora of other crusty death-metal bands. Nothing is bad here, it’s just not memorable. Hell even being bad would be more memorable.

The supreme doom mongers that are My Dying Bride have returned, however it becomes more and more apparent that the chasm between what is delivered on record and what is played live is becoming wider and wider. There’s a somewhat uptempo, almost thrashy attack these guys peddle tonight, perhaps in keeping with the short set and the nature of the festival, but you can’t help feeling they are being split between being entertaining and staying true to spreading the melancholy they have become infamous for. The question is, just how miserable is miserable enough, and is that a stupid question?

A stunning display from the Irish titans Primordial comes up, now and backed up by a flawless performance complete with mighty guitar sound and a perfect foreboding atmosphere, the likes of which many will try but only a few bands can truly create. From the opening sentence, “We are Primordial, from the Republic of Ireland” you could feel the electricity in the air and they did not disappoint. The coffin ships indeed.

We see Gamma Bomb next – they are yet another not so serious band (who doesn’t like zombies and beer?). They assault you with a punishing retro-style thrash attack taken straight from the 1986 rulebook. Everything here is clearly about the fun, which gave a welcome slice of variety to the Jagermeister stage considering the more sombre nature of many of the bands on offer tonight. Put on your bullet belt!? If I could find it, I probably would for these guys.

Next, we are rocking out with Extreme Noise Terror. Following the initial shock of the vocalist’s crazy hairstyle, akin to someone who just electrocuted themselves in a wall socket these guys were never going to be too serious, apart from the serious damage they can cause your eardrums. Complete with two bassists/guitarists, (do you really need two bassists?) they created a wall of noise so impressive it could have knocked down the Berlin Wall.

Pig Destroyer follow next, and we get exactly what we want. This anarcho-punk attack on the senses is completed with a terrifying overload of samples and soundbytes. How much you like this will depend on how attached you’ve become to working eardrums.

Next up, we take a gander at Wodensthrone. They are a rather menacing sight on the eyesore stage, this grim adventure into pagan fears was slightly diminished by the lame sounding sample effects from the keyboardist. Whilst technically impressive, it was hardly their best night and the blend of epic pagan music and blackened blast-beat metal just didn’t come together here in the way they wanted it to, not helped by their billing during the middle of the day. Not a bad performance, just you know, they can deliver much, much more.

Following up, we have Aura Noir – working complete with a seated guitarist, this band delivered a sharp shock of crust-punky thrash with the occasional more harsh blast beat elements. One for the redneck in all of us.

Electric Wizard are our final band of the evening, and they are probably the only major disappointment of the festival, their unique brand of stoner-pagan-doom complete with classic 70’s horror film backdrop projections was just too mismatched to close Damnation on a major high. Their trademark combination of drug-induced psychedelia and gargantuan riffs just didn’t seem on form tonight, and coupled with the band looking decidedly worse for wear during their set this quickly became a rather dull and dreary mash up of the favourites. Even the live rendition of ‘Black Mass’ from the new album failed to impress, sounding rather limp compared to the album version. Perhaps this was a case of “a spliff too far” for the stoner doom merchants.