It’s early morning, very early and I’m awaiting a bus to take me to Download 2013, my most anticipated festival of the year and, arguably, the best lineup in almost a decade! 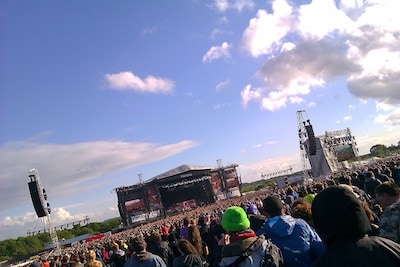 My drive was long and my bag was heavy but upon arrival the vast expanse of Donnington Park  was swept up with thousands upon thousands of festival goers who poured like a torrent through a variety of eateries, vegan cafes, charity marquees and drink vendors into a campsite full to the brim with metalheads, rockers, emo kids and bearded punks. Download is the creme de la creme of alternative individuals through all ages, gathering en masse and united by one thing; to listen to awesome music!

It’s Friday June 14, 2013 and once my tent is pitched and old friends reunited with I mosey on down to the Zippo Stage to see my first band of the day, I’m expecting something cool, something heavy, something with stupendous oriental style and I was most certainly not disappointed. Dir En Grey. On stage the Japanese five-some channel what rock is really about, powerful vocals and hardcore guitar riffs. The fantastic set was only let down by how short it was, possibly due to the more than an hours wait for the set to begin. It was then that it started raining a phenomenon which continued for the entirety of  my visit.

I then swung by Asking Alexandria giving a grand opening to the Main Stage with enthusiasm and past Motionless In White who screeched bile and vitriol though their set and on to a long-awaited Korn performance, their first in the UK since Head returned to the band. I left satisfied after ‘Freak On A Leash’ was belted out just as well as they used to play it.

A conundrum then set in, to see Slipknot or HIM? I opted for a bit of both. Slipknot, to start, were on full form, with pyrotechnics a-blazing and rising drum kit complete with a swinging clown, their creepy masks and rusting urban stage dressing reminding me exactly how the band became so successful in the first place. From there I decamped to the Pepsi Max marquee to see the remainder of HIM where a fresh-faced Ville Valo kindly treated us to a rocking yet sombre set, complete with an atmospheric cover of Chris Isaak’s Wicked Game which is all we’ve ever needed from HIM. There seemed to be something quite humble about Valo now, thanking us all for joining him and wishing us a lovely time, when interrupted by the commotion from the main stage he uttered “Slipknot are making a noise aren’t they, but we have a mirrorball” and they DID!

My absolute favourite of Friday’s playlist has to be Gogol Bordello who outshone everyone else with their enthusiastic gypsy punk acrobatics, involving the crowd with renditions of ‘Start Wearing Purple’ and ‘Raise The Knowledge’, for this show alone Download was worth it.

Once the music had taken a rest and night time (and more rain) drew in, I visited the Silent Disco which, for those who have never attended one, is somewhere between an amazing club and an evangelical cult. With headphones on we had a choice of two different channels of music manned by two different DJs, so if a certain track wasn’t to our liking, we could simply switch to something else, an option I’ve often wished for in many clubs. Once the headphones were off however you’re left in a depressingly bizarre hall filled with silence and shrieking people in a state of euphoria making their own words to various parts of songs completely out of time especially when half the room is listening to something else. Once you choose to ignore this weird fact and once again don your headphones the night becomes rather enjoyable as the music, from both DJ’s was absolutely fantastic.

Saturday came and with it a headache from too much partying so a jaunt to the Shisha tent named Smokey Tentacles (smokytentacles.com) was definitely on the cards, aside from the refreshing variety of tasty shisha there was also a great menu of toasties and a marvellous chai and rum tea which really has to be tasted to be believed! An incredible chill-out zone which really set me up for the day; available to rent swell if you have the inclination, and more and more I have the inclination. 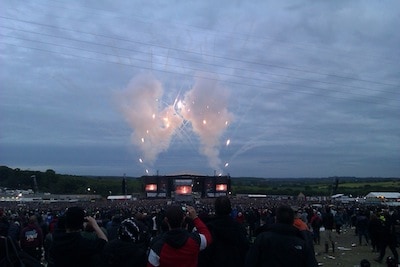 This may also be a great place to mention the variety of food on offer both in the village and the arena swell, chiefly the fantastic crepes and a takeaway yorkshire pudding vendor! Yet it wasn’t all hot dogs and kebabs there was also a vegetarian and vegan health cabin with some lovely flapjacks and fruit on offer. Musically, next up I head straight to Alice In Chains who were incredible! Heavy and focussed, the band, although no longer in their prime, definitely wowed us all with some classic songs yet, they were cut short so with a quick apology we rocked out to two more songs and left wanting more.  Then it was onto a favourite of mine, Queens Of The Stone Age! To put it quite simply they ruled absolutely with incredible performances of ‘First It Giveth’ and ‘Go With The Flow’, I sat down satisfied.

While intrigued by the name Kvelertak, a Norwegian band I had yet to be acquainted with I can honestly say I’m glad I did, playing the Pepsi Max stage and maxing it out. Vocalist Erlend Hjelvik came on stage with a giant bird on his head then rocked his brains out to the electronic metal accompaniment, it was heavy, it was scream and everything you’d expect from Norwegian metal. This was the moment I had to swap stages to see the long awaited demi gods of rock Iron Maiden and it..was…incredible! Not only the best band of the entire weekend but one of the best theatrical shows I’ve ever seen with Bruce Dickinson changing into more costumes than Priscilla Queen Of The Desert and belting out an incredible array of fine and unfaltering vocals and gigantic set pieces of various 20 foot Eddies rising up, spraying fire, smoke and explosions. I momentarily forgot that the band have been rocking the world for 38 years until Bruce, in one of his many audience chats, asked who was alive in 1988 for Monsters Of Rock to which I and only a third of the audience raised their hands. This did fill me with glee, however, when I realised that Maiden still have the ability to inspire the modern youth after so many years in service and inspire us all they did. Not to mention that the set opened conveniently with a blooming Spitfire plane screaming overhead to great applause.

The Sunday began with a Corey Taylor once more, this time with Stone Sour who engaged and chatted to the audience, making our presence feel truly wanted, the music rocked like I knew it would and set me on my way to a viewing of the Swedish band Ghost who were wonderfully bizarre, Papa Emeritus II  entered the stage dressed as a skeletal Pope accompanied by Jocelyn Pook’s eerie Masked Ball (most memorably featured in Stanley Kubric’s Eyes Wide Shut) which evolved into some heavy gregorian metal, quite unforgettable. The Gaslight Anthem then raised the metaphorical roof with tunes that will make you feel incredible. Meanwhile, P.O.D were next on my list rocking the Pepsi Max stage like pros, absolutely packing out the marquee until people spilled out for yards, they got everyone jumping and moshing in perfect harmony. 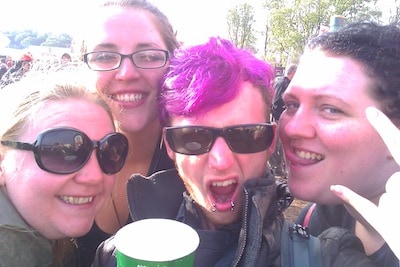 I feel the need at this point in the review to mention the Zipline which loomed across the Zippo Stage and the Main Stage where festival goers can get an arial view of Donnington while getting their adrenaline fix and the absolute hilarity that comes from watching those who got stuck halfway on the line, by Sunday evening a ritual had formed of throwing plastic bottles at those who were stuck and those who were simply going by. Time after time this target practice for arrogant Zipliners never ceased to amuse. That was until Rammstein exploded on main stage, their pyrotechnics out flaming the best of Slipknot and channelling sex, flaming groin attachments and diesel coated anger Rammstein absolutely blew all of Download away, the masses congregated to see the spectacle as they pumped out ‘Du Hast’, ‘Sonne’ and a beautiful piano rendition of ‘Pussy’ with gravelly abandon. The set climaxing, quite literally, with a giant penis-shaped canon which sprayed foam all over the audience making Rammstein the crudest finale to the weekend. That was aside, of course from the Keyboard Gimp (Flake) getting sodomised halfway through a song.

And so after all the metal had finished, I retreated once again to Smokey Tentacles to chill and listen to some awesome electro as the night passed away into a state of tent raiding, muddied detritus. I came home on the Monday exhausted and satisfied knowing I’ll probably never see such an incredible lineup in one arena again in my lifetime. One can only hope.