By Dan Buckley June 22, 2009 August 20th, 2016 Event, Spotlight
No Comments
For most of the SPHERE team the highlight of this year’s festival season is Download, but what if you prefer something a bit… greasier? 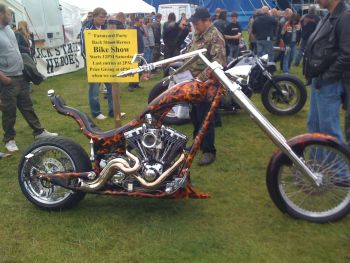 Helmsley is a pretty village nestled in a valley within North Yorkshire. It’s quiet and usually populated by pensioners but once a year it’s descended on by a hoard of bikers.
‘No cars, no vans, no pedestrians, NO EXCUSES!’ is the message that greets you on the entrance to the Farmyard Party. It’s strictly adhered to – you only get in if you’re on a motorbike or a trike. This is a festival aimed exclusively at bikers and is one of the biggest events of its kind in Europe.
Entertainment is served up via four music tents. The main stage this year was under a huge marquee and mainly featured tribute acts such as a Bon Jovi and an all-female Ramones tribute act. As well as this there was a smaller tent for cover bands, a blues tent and a dance tent. There weren’t any big name bands but that’s not the point of the Farmyard Party – you don’t go for the bands, you go for the bikes, and possibly the booze.
Around the stages were a multitude of shops and stalls. All kinds of biker clothing and protective gear were up for grabs along with a few alternative fasion stalls (including one cyber-looking one) and a huge army surplus tent. There were many different kinds of food available besides the usual festival staple of burgers and bacon butties and prices were extremely reasonable. Needless to say, booze was in plentiful supply too.
There were two campsites – one which allows fires and one which doesn’t. This year the organisers supplied 120 tonnes of wood to be burned in campfires. I found a great amount of amusement in gathering and then hiding firewood so it didn’t get pinched as the weekend went on…
There was a really great atmosphere all weekend. There are bikes everywhere – some parked, some being ridden – which makes the whole thing seem a little bit surreal but a lot of effort is put in to making it run smoothly. If you own a bike – or know anyone who does – and want to experience a real alternative party, make sure you get down next year.
***/5
For more information check out the website.