The end of last month saw the return of Supersonic Festival at Birmingham’s Custard Factory, an illustrious, thought-provoking urban festival, taking a full-frontal look into the realms of outlandish, sporadic and unconventional forms of audio excellence. 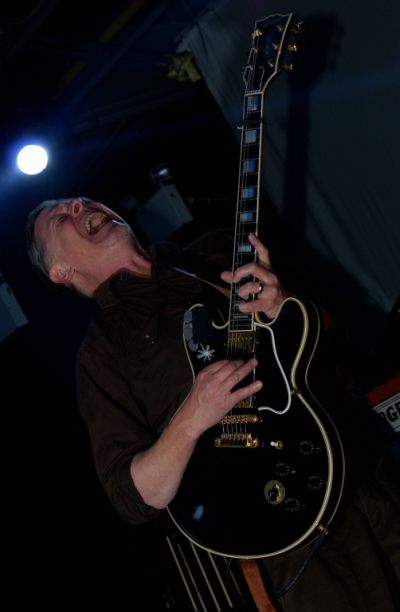 Despite the sub-zero temperatures performances were embraced with exuberance across four stages; Old Library, Space 2, Outside Stage and the Theatre. With various DJs firing up the crowds between performances and numerous stalls featuring an epic collection of vinyl, music and of course vegan cake.

Performance of the weekend for us irrefutably came from Japanese noise and experimental rock fanatics, Melt Banana. Cult veterans from 1993 the band have perfected a performance of hyper-rhythmic short songs featuring a fusion of frenzied effect driven guitar and penetrating bursts of bubblegum pop yelps. Opening their set by jetting round the stage clad with head torches, guitarist Agata‘s ever-famous hospital face mask and accompanied by animations of dancing Hello Kittys, and kissing dolls were all prerequisites of a guaranteed stage show of Japanese madness, which they certainly lived up to.

Vocalist Yasuko Onuki dressed in white appeared like a crazed but angelic goddess, with reverberation ranging from bewildering piercing shrieks during songs such a ‘We Love Choco Pop‘ and ‘Some Kind Of ID‘ to a cutesy rendition of ‘Happy Birthday‘ performed entirely out of feline meows; with audience participation. Melt Banana, already celebrated for their miniature-length songs thrashed this concept by their performance of ‘Nine Short Songs‘ featuring chants just seconds in length with each politely introduced comparable to a pre-school recital before being catapulted into a dimension of pure bizarreness. With Yasuko manoeuvring round the stage completing rag doll-esque convulsions emulating the energy of the crowd it was no surprise when the audience demanded for an encore, pining to fuel their Japanese noise infatuation further. 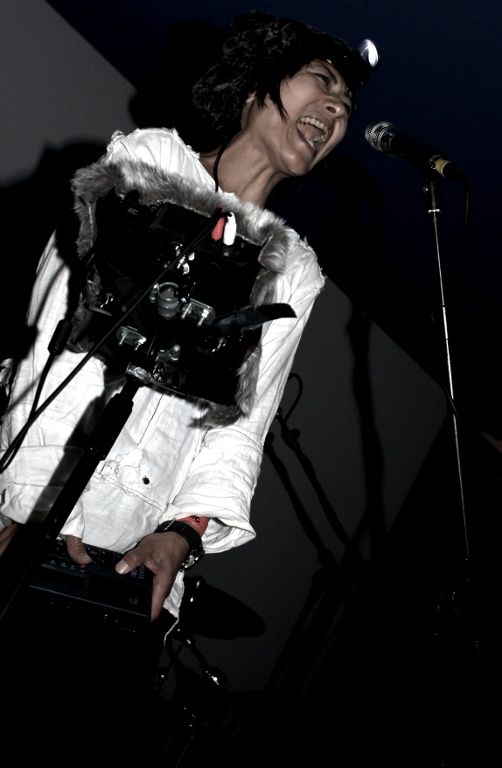 Another top contender for a highly rated performance was that of Drumcorps. The dreaded Aaron Spectre‘s combination of American hardcore and electronic music production was mixed methodically to create a sound to grace the ears of fans of a variety of different genres. Raw vocals unified perfectly with thunderous bass drum effects combining elements of chillout with the energy of industrial metal bands comparable to Fear Factory. Handling his responsibility like a true master Spectre reassigned himself to live guitar, contributing shredding, grungy and southern style riffs in addition to vocals resembling stereotypical garage punk bands. This amalgamation created an enchanting apocalyptic resonance. Crowd gratification of Drumcorps composition emerged in the form of a forceful mosh pit presenting a collision of bodies hurling themselves provoked by Spectre‘s formidable ambience. Finishing with song ‘Grist‘ in dedication to “Anyone who has left home in search of a better life” parallel to Spectre’s own journey of leaving his home in the US to embark on a music career in Germany a few years ago. 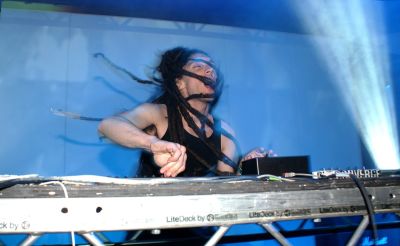 The distant drumming of Black Sun Drum Corps (nothing to do with Spectre‘s outfit, mind) could be heard by festival goers amongst the four walls of Space 2. With two forbidding figures already present on stage covered in black and white corpse paint and relentless guitar distortion in the background contributing to both the fascination and bewilderment of the audience. A parade of similar looking characters appear, orchestrating a variety of percussion and everyday items to add a rhythmic and tribal take to sludge and experimental metallers Black Sun.

Vocalist Russell McEwan complete with Scottish connotation of a kilt and tam-o-shanter bonnet connecting to his Edinburgh heritage and commanding skull staff appeared to have a split personality of both authoritative leader and Neanderthal. With soaring vocals luring in spectators, as if listening intently to a cult messiah a true essence of power was sought which each bellowing word. Black Sun Drum Corps certainly created a niche in the market of the already experimental sounds presented at the festival; an experience not to have been missed. 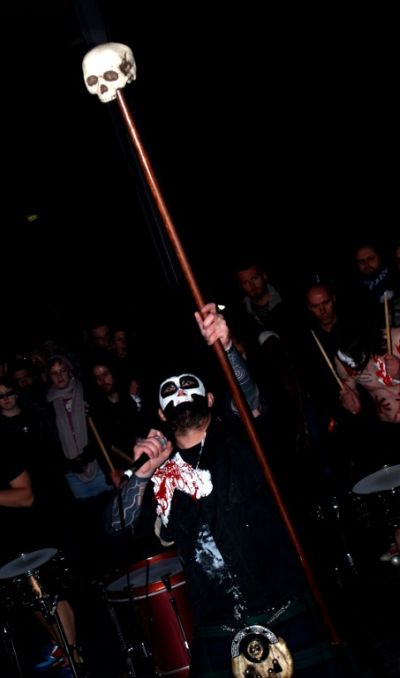 Depicted as a favourite from last year’s festival, Japanese trio Nisennenmondai take on a blend of Krautrock mixed with repetitive post-punk instrumental noise. Our initial verdict of them being over-simplified and rather unexciting soon developed into a pure adrenaline rush, enthralled by the animated crowd and their “danceable” sound, we found ourselves thrust into an unconscious world, transfixed by their hypnotic reoccurring riffs. With explosions of sound fitting to a carnival-esque vibe and reminiscent to an old Nintendo game in addition to the effectual hammering of haphazard keys, these three rather delightful girls were able to create a great show. 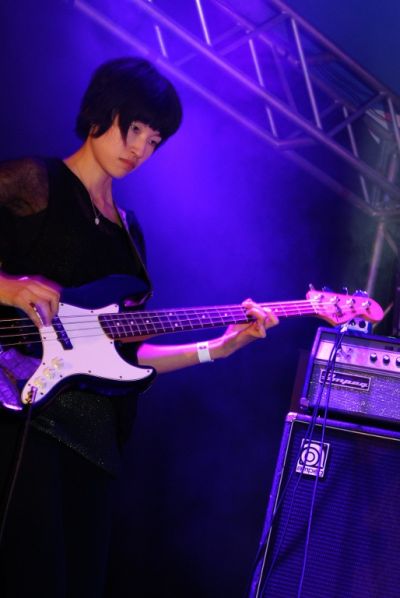 The habitual hype and expectancy was brought along with grindcore standouts Napalm Death, playing their home town of Birmingham this evening. Since the release of their first album ‘Scum‘ way back in 1987, Napalm Death have been defined as the originators of this genre, merging with both hardcore and post-punk. Yet after over two decades within the scene still remain to exhibit an unruly and violent showcase. Staying true to their socio-political background frontman Mark “Barney” Greenway spoke of his aspirations of peace and antagonistic views on human torture, paying homage to his plea with ‘Time Waits For No Slave‘. The brutal set continued featuring songs over their fourteen album existence such as ‘Suffer The Children‘ and ‘Live And Limb‘ and their own rendition of punk legend’s, Dead Kennedy‘s ‘Nazi Punks F*** Off’ leaving the audience captivated. 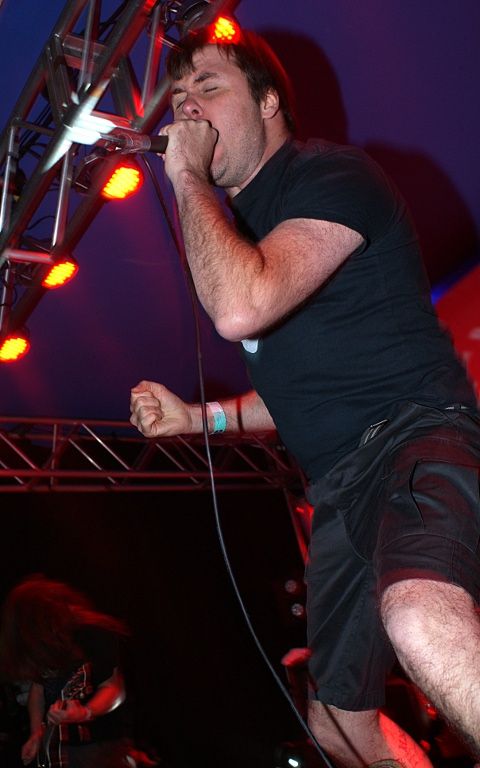 Not many bands can boost the use of their own dreads as a featured instrument within their music, however avant-garde, industrial metal band OVO can certainly live up to this testimony. The Italian duo dressed in hand made paper and wrestling masks created an electrifying scene with frontwoman Stefania Pedretti’s versatility; combining death metal growls comparable to a feminised version of Deicide, to sweet sounding squeals. Tribal-style moments were included with drummer Bruno Dorella, additionally utilising a traditional instrument to add to their unique style.

Pedretti’s superlative moment was undoubtedly her “dread-playing”, simulating a distorted version of DJ mixing scratches echoing out onto the crowds before her. Moving on to brothers Caleb and Ashton Bird, who formulate the grunge-fuelled stoner sound that is Tweak Bird, presenting atypical layers of psychedelic and jazz thrown in for good measure. With “occasional third band member” saxophonist, John McCowan adding a fingered frenzy of added curiosity.

Meanwhile, the name Fukpig just screams metal really, doesn’t it? Formed from members of Anaal Nathrakh and Mistress. These mysterious black metallers hailing from Birmingham feature the pseudo names of Misery, Migg and Drunk. The crowd indulged the band with an awesome reception, bowing down to songs such as ‘Death Of Intelligence’ and ‘F*** You And F*** Your Son’. Spitting out an angry delivery of punk, thrashing out against the church, state and a surveillance society, Fukpig drew to a close with ‘Mother Nature’s Kiss’ leaving the audience demanding resolutely for more.

Having two of Japan’s most unique electronic music exports intermingled together in a cavernous fusion of dub-psych bliss is destined to be a spine-tingling crowd pleaser. Devilman, fashioned of legendary DJ Scotch Egg on bass and Gorgonn laying down beat and live dub, produced dark and dirty bass so intense having the ability to make your eyeballs quiver with ecstasy. Evident from the high energy of the crowd the bass-reppin duo administered a serotonin-stimulating ambience. DJ Scotch Egg spent his time literally clawing the air for further admiration like a robotic noise-architect orchestrating his audience, with the crowd giving back ten-fold. 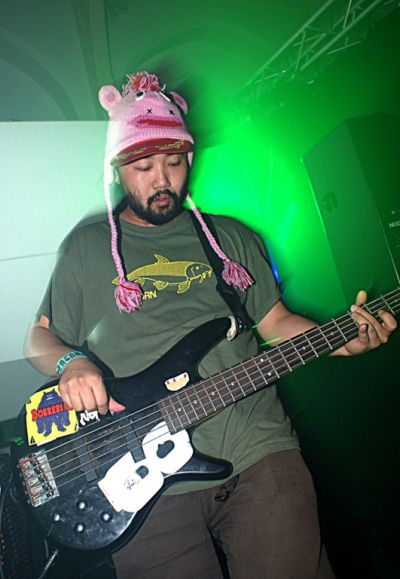 Encased in a quad of musical paraphernalia, including a xylophone and classical piano, Dosh intoxicated festival goers with an elixir of electronic, experimental folk-rock. A one man band of live drums, quirky samples and ambient loops generated a synthesis of chill-out equilibrium. With connotations similar to that of downtempo, trip hop DJ Bonobo, Dosh created a seemingly hypnotic state on his watchers, serving the ability to shift into the psyche of a sub-dimension. Displaying a technical set with song ‘Subtractions’ from album ‘Tommy’ named chivalrously after a former friend and including jazz-infused melodies such as ‘Simple Exercises’, one word; amazing! 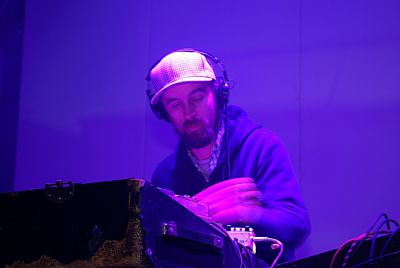 After initial incense burning to cleanse the stage and remind them of the familiarities of home Khyam Allami and Master Musicians Of Bukkake present: Bosphorean take a somewhat belated appearance to the stage due to technical difficulties. With the sheer level of world instruments on stage including violin, gong and Ud (lute) this forecasted something special. The band, clothed in traditional Turkish attire stride on to face the audience, spiritual in character with the band motioning prayer positions and stage lit in midnight blue to add to the mystique. With an intricate performance described as “Turkish-influenced fuzz rock, dessert motorik pulsations and eastern-tinged psyche folk”. Khyam Allami, mixed the traditional with contemporary playing ‘Iraqi Maqam Nawa’ invigorated with boho-styled melancholy and Ud and violin improvs. Likened to a high energy paradigm on the traditional ‘Call To Prayer’ with a haunting vibe made this performance one of the most enigmatic of the festival. 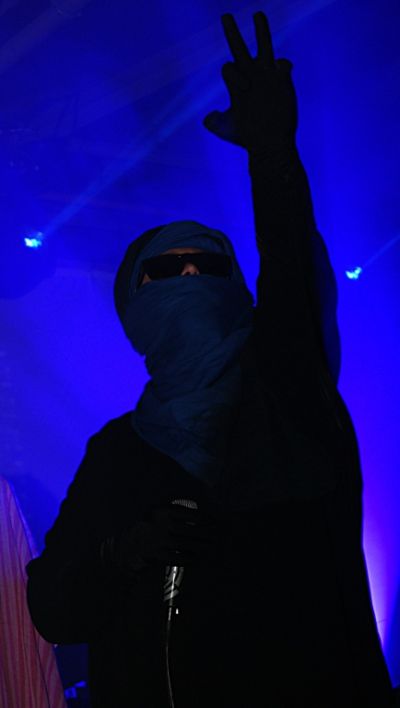 Godflesh were another band to cause a stir prior to performance with eager comments circulating. One of the pioneers in industrial metal and influencing many including Metallica and Faith No More they went their separate ways in 2002, with Supersonic Festival being one of their long-awaited performances since reforming in 2010. Executing themselves with their renowned intermittent bass, powerful variant guitar and Justin K. Broadrick’s characteristic death-core yet melodic legacy Godflesh were back. Despite the positives, compensating for the lack of a live drummer with a pre-recorded drum track and exhibiting a slight cyclical sound made Godflesh not live up to expectation.

Voice Of The Seven Thunders provided a concoction of psychedelic and acid rock to meditative attributes. Vocalist Rick Tomilinson, charges along with an almost divine performance, the band positioned in a circle facing each other as if executing a connection within a pagan ritual. There is something particularly enticing about this lot as they provide a magical yet trippy serendipity.

The final set of the weekend came from Swans who had been a recurrent topic amongst the festival goers; this was made evident by the huge turnout and atmospheric anticipation of the crowd. Their bone-tingling introduction executed from tubular bells was soon highly juxtaposed with a sound so consuming was only comparable to a thousand deranged banshees howling in unison; certainly living up to their reputation of having previously made paint crack off walls with their intensity. Soon joined by dual trombonists contributing to a somewhat unique composition. This rare appearance added to the raw appeal and continuing excellence of Supersonic Festival, bringing forward a mouth-watering banquet with a taste for pure and unadulterated sound, verging on the eccentric, the unexpected and the just plain bizarre, bring on next year!

For more information visit the official website and you can see more photos here.