For our next industry spotlight we chat to Hull legend, and O’ Riley’s venue manager, Darren Bunting. 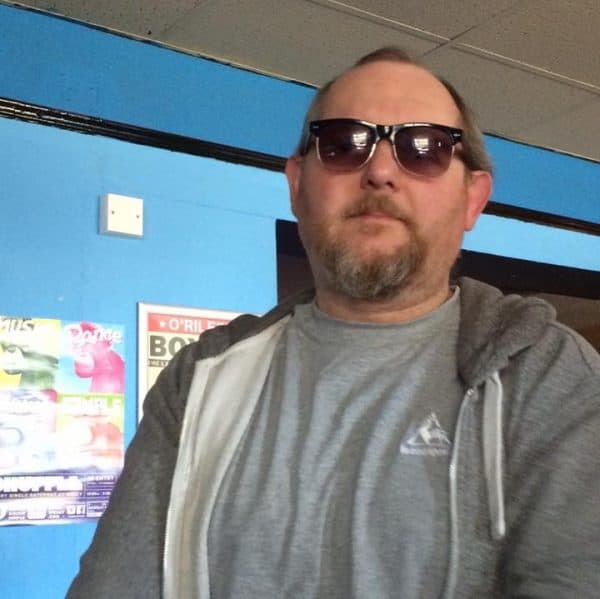 Hey Darren, tell me what a typical day in your life is like?

Running a venue, sound engineering, helping run a community arts, culture, music hub, booking festival stages, running live boxing events and stage managing means there are no typical days but most weeks run something like this – Mondays – banking, admin, marketing, cleaning with the odd gig or band-rehearsing or filming videos in the venue. Tuesdays – spend time down at the Trinity Hub in Hull’s indoor market where we have live performances every week then off to O’Rileys for a band rehearsal, admin and after that usually head off to the Sesh at Polar Bear to check out bands, network and drink Guinness.

Wednesdays – I try to have as a ‘day off’, Thursday – stock deliveries, line cleaning and exciting stuff like that before our weekly Welly Warmer gig which can be anything from acoustic solo acts to indie bands, metal and dance music.

Fridays is either a long day setting up for a boxing show which means taking the stage down so a boxing ring can go up, bars to stock, chairs to put out, ring music to find for the boxers then its the event itself on the night when we get to deal with 300-400 quite rowdy boxing fans OR, we have a gig which is a bit less work than a boxing show.

Saturdays – sometimes boxing but usually large tribute bands where we can have 300-400 punters. Sundays – sometimes a gig , sometimes a day off whcih really means time on my laptop promoting/booking/admin/social media trouble causing. Most weeks pan out to 60+ hours work, obviously I do this for the love of it and not an hourly rate which I would be doing quite well on.

What are the biggest challenges for you running an indie venue in a city like Hull?

Audiences, just getting people out to live music is a massive struggle for 80% of the shows that happen at our venue. Marketing and promoting takes so much time and something that works for one event very rarely works for another. Finances are always tough as we had a fair few business set backs in the first couple of years but are now starting to get on to an even keel but Hull is not a city awash with money for most people so managing to keep going through some very expensive and adverse conditions makes me proud somedays but despair others.

On stressful days – what things keep you motivated – think people, places or music?

I can’t seriously answer that, probably just that I’m stubborn and hate to give up at anything. I suppose tomorrow is always another day is a big part of it and the majority of music events are massively enjoyable for me as a music lover and the regular customers and musicians we know are great to see at the bar or on the stage. I have such a wide ranging taste in music that one of the most enjoyable parts of a gig can be setting up with iTunes on random play and an old classic comes on or a new track I’ve downloaded and not listened to yet that catches my attention. Or some random cheesy pop song from my DJ days….I have some terrible stuff on my laptop according to some people.

What’s been a career highlight for you?

I don’t look back very often but I’ve played at Hull City Hall, put Fish (from Marillion) on for an acoustic show, booked Don Broco on their first ever UK tour for a gig at Sharkeys, was in a crowd of 12 people in the Adelphi the first time The Cooper Temple Clause toured the UK. Stuff like that I suppose.

How would you advise bands to go about developing a reputation if they’re coming out of a city like Hull?

Make sure your live show is tight and get out there and gig/network with bands from other cities. Promote every event as best you can, be it a hometown show or your first gig out of town. Don’t be a dick and support other bands, it does pay off.

What about people who want to start managing their own venue in the future?

Don’t….seriously if you’re putting a venue together, whatever you think your budget is, double it and be prepared to work for next to nothing for a few years as reputations take time to build and the learning curve in the licenced trade is massive.

What about the scene itself – what are the postives and negatives of Hull’s scene?

Positives are the bands and how at the moment the metal scene is pretty tight and supportive of each other. Negatives is crowds, sometimes the brick wall I bang my head against seems to be getting harder. In the acoustic/singer songwriter scene Hull has loads of very talented musicians but again building crowds can be a struggle however good they are.

Talk to us about your career – offer a timeline if you will as to what sort of things you’ve achieved?

Well, I’m an old git so this could take a while…..or so our staff say at the venue. As a kid my Dad was a DJ so I was surrounded by music, soul, reggae, pop, disco all which I still love, 16 I bought my first bass guitar and over the years played in many original and covers bands onstage at venues from places like Hull City Hall, Derby Assemble rooms to the Adelphi, Lamp & Springhead. Loads of pub & club gigs, military bases, weddings, young farmers parties, race courses, even at the City Of Light Stadium in Sunderland. Started sound engineering and worked at festivals like Springboard, Humber Street Sesh, Tattoo Conventions, outdoor events and was house engineer at The Lamp [twice], Ringside and now do 80% of the sound at O’Rileys. Time does seem to fly and I’ve probably done lots of interesting stuff, to people that just seems day to day to me now.