In our latest Industry Spotlight, we chat to York-based music producer, Joe Graves – who works with his brother Sam collectively, under the business moniker of Innersound Studios. The pair have worked on records by Asking Alexandria, Yashin and more. In this interview, we chat to Joe about his career, inspirations and more. 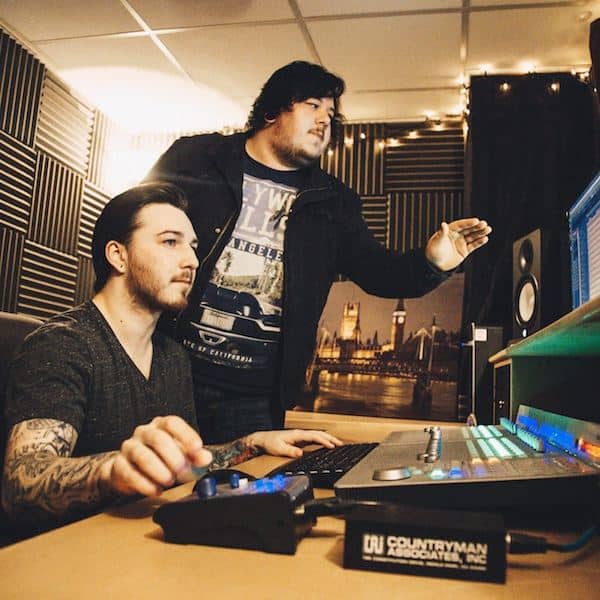 S] What’s a typical day like for you lads, is there one?

This is the beautiful thing about what we do. There is an incredibly small amount of routine involved with being a self-employed music producer, and business owner. I’m sure the average dude would imagine we just sit there and listen to music all day. Well, occasionally they would be correct. Our days can be spent in the studio actually working with bands, writing, recording and mixing all through the night. Sometimes we could find ourselves with a phone call saying we need to fly to a different country that night. And other times we could be on a night out drinking with our clients just to get to know each other better. It’s a great way to discuss the project, get a vision and get hyped so we can get in the studio with the right collective vision to create some musical magic!

S] When did you guys decide to start a business together?

The business kinda formed without us even realising. We were kids who knew nothing but music and there was no consideration for any other career. I became interested in producing at 17 and studied at home and in local studios until I had enough knowledge to begin the climb of building my own reputation and customers. With Sam being my brother, it was just a matter of time until he got involved since we lived together, toured together in a band [With One Last Breath] and just always shared interest. Our parents saw that we were serious about this and hooked us up with a place to build the studio! It’s cliché as hell but we just did what we loved to do and started making money so we registered as a Ltd business!

S] What are the challenges of being bros and working together?

Developing work personalities. If I fuck up or Sam fucks up, we need to tell each other and correct it to keep our game strong. It would be natural for some siblings to get butt-hurt about this kinda thing and just squabble. When you are running a professional business, that is not an option. If I do my first mix on an album and it’s not quite right, Sam’s got to tell me. I can’t cry and go tell mum.

S] Talk about your backgrounds in With One Last Breath and how you got to this point?

As far back as eight years old I was studying guitar so music has always been there. By maybe 14 we were both playing in metal bands just doing Metallica covers but rarely played in bands together. As our friends grew older and started following their parents desires of them going down a more academic route, we still just knew one thing. And that was music. We started With One Last Breath and went out of our way to get the name known to as many people as possible with whatever tools we had at the time! We just worked and worked until we found ourselves on European festivals, Download festival, UK academy 1 tours, and so on.

S] What do you think of the music scene in York currently?

I couldn’t tell you much about that as I don’t believe in bands being limited to a ‘scene’ or city. Being in a band is an opportunity to bring your work and passion across the world with you and to live what music is really about! We are fortunate enough to be from a city that is some kind of gold mine for musicians and it’s common to see a hell of a lot of them touring, signing record deals and living their dreams! I’ve always noticed a mutual respect amongst musicians in York and believe that to be the key to their success. We are just always keeping the vibes and inspiration high!

S] We are always asked why we didn’t base our business down south, in London or a bigger city – do you believe in the North/South divide with regards to opportunity in the music industry?

One huge thing I have realised is that if you are good at what you do in the music industry, location is irrelevant. None of us are running some sort of ‘walk in’ based service and the people within it thrive off travelling! It’s incredibly common for people to travel from a different city or even country to record with us simply because they liked our work.

S] What’s the best thing about being based in York?

I could talk all day about how much I love York! It’s where we’re from for a start so our friends and family are here. We have a studio just outside the town centre so there are no distractions yet it’s a 5 minutes drive right into York where you can explore the incredible history, architecture and restaurants.

S] What advice would you give to new bands starting out in the city?

My advice to anyone about anything they do… And this isn’t just music! Just be passionate and truly give a shit about what you do! If you have goals or desires, focus hard, get your head down, be smart and just crack on. If you care enough about what you are trying to achieve, it’s certain that you’ll find a way to make it happen. And be patient. Rome wasn’t built in a day!

S] What are your key tips for aspiring producers and recording artists in the area?

Be assertive. Go out there to find knowledge. Never stop studying, asking questions, practicing or being there! If you aren’t present then the world is just going on without you.

S] What’s been a career highlight for you, first as when you’ve been recording with bands?

It’s always perspective based. When we were 18, we literally thought that once we had played Download Festival we would have achieved all that can be done in life. By 20 we played it and just wanted the next challenge!

After working on albums abroad, for labels, having teams and stuff, we had the greatest revelation. And it was that no one is gonna care about our journey as much as ourselves, so we stopped relying on anyone else and realised that the key to success with based 100 per cent on our own efforts.

S] What about as a pair of musicians?

As musicians in general, I’d just have to say the trust and reputation we have some how built since being kids. It’s a great feeling knowing that 10 years ago you’d struggle to get an opening slot at a local gig with your band, and now we get e-mails asking if we can fill in on guitar for one of the biggest current metal bands in the world!

S] What keeps you lads passionate outside of music – think people, places and thing?

It’s good to mix your life up. For example, outside the studio, I don’t really listen to much music. It’s mainly just movies and going for walks, and exercise – so I don’t wear my passion out! My daughter is a great de-stresser too. I can have a band freaking out over the sound of a pinched harmonic thinking that adjusting it slightly is gonna change the world, but then Ava will drop her bottle on the floor, start flooding with tears and just want cuddling until the traumatic experience is in the past. Which I think is hilarious! For me, that just keeps things fresh.