In our latest industry spotlight, we chat to the ace Libby Maguire of The Noise Cartel about her career in music PR – how she started in Manchester and ended up working in PR with the likes of Marilyn Manson and Cypress Hill. 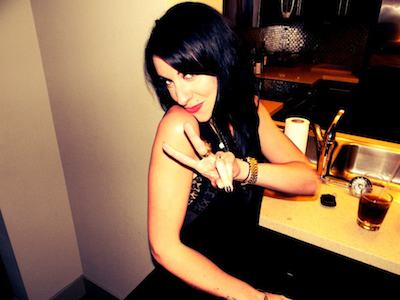 L] “Well I suppose I just did a lot of work experience and interning to begin with. I made sure I put a lot of emphasis on making friends with people because that is at the end of the day, probably the main reason I got started. Knowing someone who can point you in the right direction and give a good reference is invaluable. When I was at university in Manchester I found a little music PR company and just did a day a week in the office with them. It was a little more old school back then, I did press assistant stuff like cutting up magazines, pritt sticking the coverage together and scanning it in.

I did that for a couple of years along side studying and like a proper nerd,  used to sit at home reading  the Music Week Directory folding down the pages of companies that I’d love to work at. I sent my CV to as many as possible until I got some work experience at Hall Or Nothing in London.  I found it really important to follow up on the phone until they take notice, even if they think you’re a stalker! I ended up working the whole summer for them which included all the Reading and Leeds PR set up and working on site at Leeds festival.  This resulted in me returning a year later after graduating to a paid internship role with the company for seven or eight months.  I’ve worked on site at Leeds festival for them every year that Hall or Nothing handled the PR which I believe was five more years.

The lovely Gillian from H or N recommended me to the head of press at Warners so I went from there to Warners to an unpaid position in the press department.  Fairly soon after starting I was given some bands to do the online PR for and luckily for me there weren’t too many rock fans there at the time meaning I got to do Deftones, Avenged Sevenfold along with some awesome pop stuff such as Jason Derulo and Iyaz. Everyone was lovely at Warner and eventually after a few months unpaid a job became available in a similar realm, digital promotions.  I went for it and ended up working at Warners for over and year and a half. I soon became a little disheartened by how a major label works and how cut throat it can be and so decided to leave and free lance for a while.  I’d made some good friends whilst there including lots of band management teams so felt it was a good time to leave.

Within a couple of months an awesome independent PR company called Anorak approached me and offered me a position as a Senior Digital PR specializing in rock and pop music.  Up until that point the company was very Indie related so my task was to branch the company out a little.   The first large artist I welcomed to my roster was Cypress Hill, they were releasing a collaborative EP with dubstep DJ Rusko. I knew their management from Warners (they also managed Deftones) so it goes to show how relationships can be the most important part of this job.  Over the year and a half I was with Anorak I added Marilyn Manson, The Darkness, Enter Shikari, We The Kings and Heaven’s Basement to my roster.  I loved every minute of working for Anorak and have them to Thank for a lot of my work ethic.  It is impossible to learn at a major label, a good structured independent company is definitely the place for this!

Focusing mainly on digital PR is still very important to me however I always really wanted to work across print and online press.  That’s part of the reason that when The Noise Cartel owner Adam called me to ask if I wanted to join his team I decided to make another move.  He was wanting to take more time out of the office and so needed a PR to come in and hold the fort.  This meant I moved up in the ranks of responsibility, could work across print and online and inherit and awesome company roster that includes the likes of Asking Alexandria, Falling In Reverse and Sonisphere along with the key clients from my previous roster.  I’ve been here for about a year now and I’m not going anywhere [laughs] I’m happy.”

S] What have been the kind of highlights of your career so far?

L] “I suppose, a personal highlight would be working for Deftones because that was my first ever gig. When I was sixteen I went to see Deftones at the Manchester Apollo and my dad parked outside and waited for me. To then be working on one of their albums, going for dinner with them and covering some of their press was quite amazing to me. To get to work with a band I’ve held in such high regard for many years was really great. Having My Chemical Romance headline Reading and Leeds was amazing too.  Nothing however, can compare to feeling you get when you find an artist you want to work with, large or small, pitch for the campaign and are successful.”

S] What would you say the biggest challenge is for people trying to get into PR and similar careers now?

L] “I think the main challenge right now is the sheer amount of people willing to work for free and intern.  It makes it very hard for young people to get a job at the end of the internship because a lot of companies know they can have a constant stream of interns. I’ve known people that have worked for free for years and years and still can’t get a job simple because the junior level isn’t as common in companies any more which is a side effect of cut backs in the industry.”

S] How nerve-racking was it, when you’ve moved into independents to pitch to get business?

L] “To be honest in this area of the industry, there’s not a lot of in-person pitching going on. It’s a lot more like an informal chat to get the ball rolling followed by a more detailed PR plan in writing. It can be nerve-racking when you go into a board meeting with ten people you’ve never met but you just have to take a deep breath and reassure yourself, I always find if you print you PR plan and have it with you it also helps. If you show you’re keen and genuinely enthusiastic you’ll get to where you want to be generally.”

A lot of people don’t have the luxury of staying at family houses in London, what advice would you give to those who live up North? Do you think they have to move to London or is it possible to be successful in the industry up here?

L] “It’s totally do-able if you’re based up North. If you Google it there are a few little PR companies dotted around. With the internet being so important you can be based anywhere too. I think it’s important when you’re trying to make your initial connections to get down to London and maybe do some work experience there but its not the be all and end all. Maybe look into local radio stations or small local labels. If you want to work in PR you don’t have to start in that area, you can make connections generally within the industry and if moving to London is impossible maybe get into repping shows at a local venue, or working with local bands.”