By Dom Smith May 7, 2016 Industry, Spotlight
No Comments

In our next industry spotlight, we chat to Mikey Shiraz about his work, and the legacy of The Parish in Huddersfield. 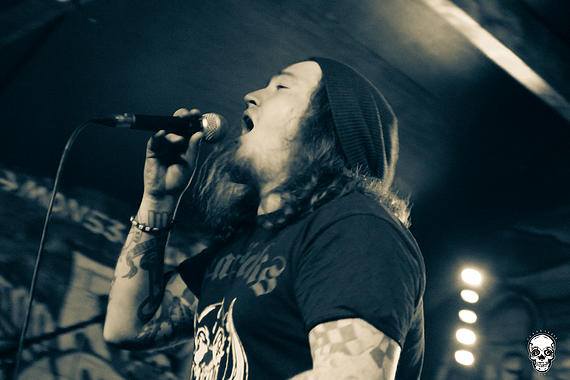 S] Talk to us about how it feels to have come this far with The Parish?

It feels incredible, to be honest. To see it grow and evolve over the years has just been something really special. We have a killer team here at The Parish all with the same goal which is to make it the best venue of its size in the UK. I mean last night was the first night of the birthday celebrations, we had the Skints play a sold out show. The first through the new PA and after the big refurb and I couldn’t be happier. It sounded amazing the band enjoyed, the crowd enjoyed and it just looks killer in there.

S] What’s kept you going all these years?

Hunger I guess, I want to keep topping what has come before. There is a few times where I have said ‘if I can book this band then that’s it I’ll retire, I can’t better that’, then somehow I have booked them and thought ‘shit’ right set those goals a lil’ higher.

I’m actually announcing a band this coming Monday who I have always wanted, they are actually one of my top five favourites. so it’s things like that. It is a total buzz chasing gigs and then when you finally do pull it off it just feels awesome. That and I hate paying into gigs haha. If I book the band, I get in free, makes perfect sense right?

Also, I don’t know how to do anything else. Imagine working an office job! I’d be shit at it. I like being able to wear what i want. I would go frickin’ crazy. Unless it was in a zoo. I think I’d be a pretty rad zoo keeper. I enjoy zoos. I came up with a wicked song about Chester Zoo I like to sing on the way if going
there. I’ll sing it to you sometime. It’s basically just the words Chester and Zoo repeated but it has a cool lil melody. Sorry went off on a tangent there. So yes I like the zoo and I want to work in one!

S] As a venue manager, and a member of a touring band, how do you manage your time?

Badly! Nah, it works out pretty well to be honest. Like I said we have a great team here at The Parish and they know how to handle any situation so if I can’t be there I know shit will get done. It may sometimes look chaotic but it is all organised chaos. When it comes to putting on a show as hard as it is to
believe, it is all planned out meticulously. I prefer to be there so I can oversee it all but if we have a show then I’m safe in the knowledge that those lot can handle anything.

S] What are your top five tips for bands?

1. This is really really important. Always be friendly with the person doing sound. At the end of the day they are in control of what you sound like to those watching. If you act like a dick to them they can make you sound like shit. also they are in the promoters ear. They can say after if a band were awesome and
should be booked again, or if they are knobs and need blacklisting.

When we play live the first thing I always try to do is introduce myself to the sound person and as soon as we finish I source them out, shake their hand and thank them for the sound. They work a lot harder than you think.

2. Gig! I know it’s a stupid one to state and may seem a bit obvious but you’d be surprised at the amount of bands who just don’t gig. Get out there, play, travel about with your buddies.

3. Have fun. Too many bands have a singular focus of being big but come on, surely the reason you set up the band in the first place was to have fun with your buddies. I have always said that if it stopped being fun I’d quit playing but I love it as much today as when I started 1000 years ago and so I continue.
Your band should not be a job. If you get some success then awesome, enjoy it but please don’t make that your primary goal. At the end of the day look what you are doing, you are hanging with your mates, playing songs to people which you wrote together as friends, that is pretty awesome in itself so just have fun.

Who knows you may see the greatest band you have ever seen, that band who changes your life, that would suck if you missed that. Also you may make some new friends, people you can maybe do joint tours with, hang with. I’m happy to say I have made hundreds of friends all over the world from playing gigs, and
that is an honour in itself. Some of these people have become my closest buddies all from just hanging about at a gig, having a few drinks and a laugh. Don’t miss that opportunity it is one of the greatest gifts that playing gigs will give you.

5. Watch the ego. This can go back to the thing about being nice to the sound person. The amount of people you meet with crazy egos can be nuts. I mean why? You are playing music, you aren’t pulling someone from a blazing building or pulling a drowning puppy from the ocean. I’ve always believed it is much easier to be nice than be a dick so just be nice, it’s not hard.

The amount of people I have met who truly believe they are the coolest shit in the world and much better than you is silly. Step back and take a look at yourself, you look like a frickin’ idiot if you act like that, Nobody thinks you are cool. I’ve brought people up on it a few times and it is quite funny. They
normally start spluttering and go all sheepish. Be thankful that you get to do what you do and people are coming to watch you. Appreciate that, appreciate them, appreciate those around who are working hard for you to be able to do this. Just be nice.

S] What have been your top two favourite shows?

The Bronx – I don’t know if you know, but they are one of my fave bands ever and I have had the honour of being able to put them on three times now, twice as The Bronx and once as Mariachi el Bronx. All three times were an honour and a pleasure. Super down to earth guys, amazing band, no egos, all their crew too
are just awesome.

The Skints – It may be because it is fresh in my mind as it was last night but what a gig. The refurb looks awesome, the new PA sounds amazing. The band were great, known them a long time and it’s so cool to see how far they have come, thoroughly deserved too. Last night was rammed, it was hot but the vibe was beautiful, everyone was dancing, everyone was smiling. The band hung around after and partied to the early hours. It is how you want a gig to be.

S] What about promoters/people setting up venues?

Do it!!! You will love it. There will always be bands out there wanting to play shows and the more venues and promoters that are out there giving them that platform then the better. Also make buddies with other venues and promoters around the UK, it can help lots, discuss tours, prices, help each other out. A
few promoters/venues see it as a competition but it shouldn’t be. We are all in it together so lets help each other out. So, yes set up a venue and become a promoter the UK scene needs you!

S] What about the biggest challenges?

Not getting hammered hahaha! Honestly it’s a struggle. People offer drinks all the time and it is rude to say no plus tequila is delicious. In all seriousness though I guess it is getting word out to people, you want
every band to have an amazing busy gig and sadly it doesn’t always work out that way which sucks but we will keep striving and hopefully one day we will reach that point!