Soundsphere have a chat with Matthew ‘Rodders’ Williams-Cooke and Thomas Harrison, an off-branch of SK Booking in America, about the advice they would give to an aspiring band, or booking agent. 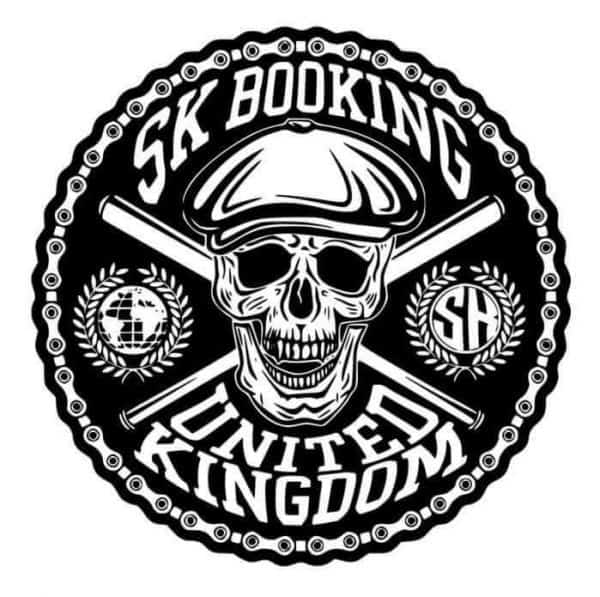 M] It started out as just myself a few years ago, my friend Lee (who I met in the military) and I made a connection over music. He approached me after not seeing me for a few years, and told me what they were doing in America and how they wanted to tap into the UK side of it. As we are primarily a booking agency for hardcore, metal and all the alternative genres, we slowly started it. It started off as one event night last August, it was really basic, no posters, just one leaflet online, it was a laptop with Spotify and it just escalated from there! I approached Tom, who I’ve known for years, we were into the music scene and were there together during the glory MySpace days! The scene in Wrexham was fantastically strong.

S] What would you say the biggest challenges are on a day-to-day basis?

M] Right now, our biggest challenge is about continuing and expanding, we’ve just started branching out. It all started off in the Mold area, and now just branching out to Liverpool and we’re looking at Chester and Wrexham too. It’s about expanding at the right pace because all we’ve had at the moment are highs, we’ve had no lows so far, it’s about keeping momentum up.

T] Some people might consider it jumping the gun a bit, putting on a gig in Liverpool instead of around here but the thing is when you’ve got a place like Liverpool there’s something going on already so it’s easy to tap into. Getting it started fresh and literally planting that seed and watching it grow into a bigger scene, that’s the hardest thing to do, but I think since August we’ve been quite successful at planting that seed and it is starting to grow and starting to develop. We’ve had people we don’t even know getting in contact asking ‘Can you book our band?’ and this is exactly what we wanted.

S) What’s been a career highlight so far for you guys?

M] I recently just came back from America, and I went to California as SK Booking were throwing a really big show and it went fantastic. There were a lot of big bands, the sound was great, the show was great, it was a full packed out venue and all the bands were happy. I also made some great contacts as well.

T] Doing something like Mad Friday before Christmas was a special one for us. Bringing together two huge local bands (Wolves and Day Before Mortality) who are big on the scene round here and both bands smashed it, and it blew our expectations.

S) What advice would you give to someone who wants to become a booking agent?

M] Be honest. Have your ethos, and your mission statement ready. Plan out what you want to be and specify what you want to do. Definitely have a plan. I know I say I slightly “winged it” at the start but if I could go back I would have a few months prep better to have it all organised. I had a couple of hiccups at first!

T] I think, stick to your guns on something. I can understand how a lot of bands travel a long way to maybe have a small turnout or not make as much as they would have liked to earn from a show. I think a lot of bands seems to think that maybe they can manipulate people to get things. Don’t bend and fold for people you don’t need to, I think that’s important, but at the same time be honest. You have to accommodate at the same time.

T] Personally, I think if you’re going to book a band and you’re not honest with them, then just fucking quit! Just stop doing what you’re doing, if you book and band you say you’re going to pay them, you’ve got to pay them! You agree on the contract and you follow through with it.

S) What advice would you give to bands who want to get involved with a booking agent?

M] Bands need to be clear and concise and know what they’re about, they don’t have to have the latest recorded EP, latest tracks on Soundcloud or Bandcamp, but they should know what they want and what they should expect. They need good communication as well, if you’ve got a good line of communication before a gig, 99 per cent of the time even if it is a low turn out you’re going to have a great relationship with the band.

T] For a band as well, I think if you’re coming to a show, bring the fire! Come down and no matter where the gig is or how many you’re playing to, give it 110% every time. If you half-ass a gig and there’s twenty people there, you don’t know who is in the crowd or who people will be talking to, but at the same time, those people that have seen you will think your band is crap.

S) What do you think of the alternative music scene in Chester and Wrexham?

T] I think it was dead at one point.

M] It was definitely dead, or to use a lighter word, ‘dormant’ but it seems to be slowly coming up. We’re only working out of a small town inbetween the two now, but what we have seen in that town and what’s been coming now, if that what if we’ve done can help happen just from us, then it’s just going to blow up to an extent in the Wrexham and Chester area. It’s definitely not completely dead in Chester.

T] If you go back five or six years ago, it was just booming. There was always a new band out or artist, someone doing something. Dormant is the better word, it was like “What’s going on?” A lot of the reason for me getting on board with SK Booking and jumping at the chance is because I love music, it’s a big part of my life.

M] Even if it’s just hosing a night for ourselves, if no one turns up I’ll still have a good time, we’ll deal with the finances another day!