It’s time to talk to another person who could rightly be considered The Busiest Man in the World. Nevermind, Sulpher, and various projects of his own, including his brand new website, which encompasses more than this inept writer’s head can possibly cope with. Tim Muddiman (of Gary Numan, and Pop Will Eat Itself). A lovely bloke who isn’t afraid to speak his mind. 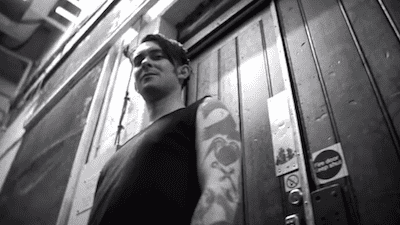 S] How do your structure the day with such a busy schedule?

T] “It’s more like structuring the year. I’m on tour, I’m remixing an album in July and August, so I’m really militant. Clock in, clock out, with a structured lunch hour. I start strictly at nine.”

S] What are you excited about at the moment?

T] “I’m excited for my new website that launched recently. I haven’t had any time to do it over the last four years. I’m launching my whole production to show what I’ve been up to. I’ll be working with media companies, film companies, art house, sound design, and find artists to work with. I’m gonna push it as much as I can. Then there’s just tours throughout the year. Next week will be a different story though.”

S] How do you chill? How important is it to have that time away?

T] “There’s been a lot of pressure for a long time. I’ve got a nine year old daughter and I wanna spend as much time with her as possible. To be honest, my family time is my down time. That’s when I immerse myself with going to the cinema, going for walks. Just doing my best to listen to my kid, and be inspired by her. My girlfriend too, she’s a writer of film. She’s really intelligent, I love listening to her. We talk about creativity and the struggle of it. Reading too, I’m reading ‘The Outsider’ by Colin Wilson at the moment. It’s phenomenal.”

S] You play with Gary Numan, and you were in Sulpher. How do you create those opportunities?

T] “The main thing that has happened to me, and the thing that I am most grateful for, is meeting Rob Holliday. Rob has been an incredible help and influence on a lot of things that I have been involved in. Also, when opportunities come along, you have to know your sh**. People know when someone isn’t prepared to put everything on the line, and if you’re not full time committed, don’t bother. Forget the whole thing. I’ve put people on tour who’ve inspired me, and the level of it hasn’t suited them, and its often turned out that they don’t like it. You have to love everything you do. You have to love the music and love being on stage.”

S] What inspires and motivates you as a writer and a musician?

T] “I’m really inspired by writers. I think in terms of stories, and think poetically. That really describes the feeling of music to me. Eighties electronic-hip-hop inspires me. Gary Numan was around then, but I wasn’t into that! I was more into black music. Then in the late eighties, acid-house music. I’ve never really liked rock music apart from Nirvana. There was nothing like it at the time. Time, that inspires me.”

T] “I’ve been asked to join lots of rock bands and I don’t know the first thing about them. I fu**ing hate Metallica. I could never play rock music to that extent. I’m so excited about electronic music. Only the surface has been scratched. Officers are hugely inspirational. I don’t think they realise how good they are. It’s so exciting.”

S] How is the writing process different when you’re working with different people?

T] “It’s easier to separate yourself and be less critical when you’re writing for someone else. I find it easier to write for and with other people. With the Nevermind thing I did, the songs are the songs. They were for a purpose, and I’m not particularly proud of them, but they’ve still got beautiful electronic hooks, lovely lead ups to choruses, synth-lines that travel through the music. It is different in some aspects. It’s melody and hooks. Sound that provokes a feeling. That’s the connection with any kind of music. Hip hop, ragga, dubstep, whatever. Music’s music and everyone has their reasons why they like something or why they don’t.”

S] It must be cool to see how people get behind you, whether you’re working with Gary, or with Sulpher. That’s probably down to that drive and determination again.

T] “It’s always about the music. That’s the leading ingredient.”

S] What have you learned about yourself as an artist and a person?

T] “Over the last three to four years I learned that you’ve got to believe in yourself, you’ve got to trust yourself. I never felt like I deserved to do the things I was doing. I thought it was a bit of a fluke. I didn’t believe in myself, or think I was worthy of doing all that cool stuff. I went through it all those years…I still go through it now!”

S] If you were stuck on a desert island, what would be the one record you chose to get you through it?

T] “Tom Waits, ‘Rain Dogs’. It’s the most phenomenal album. It affected me like how Nirvana’s ‘Nevermind’ did, but on a much broader adult level. My mind adapts really well to Tom Waits’ music.”

S] Do you have any guilty pleasures that you listen to?

T] “I listen to loads of sh**, mate. I could really embarrass myself, but I’m not going to.”

S] Will there be a new Sulpher record?

T] “Rob’s back in the studio. It’s probably about fifteen years since the first Sulpher album. That’s Rob’s thing, so we’ll keep our fingers crossed.”