Tattoos: they’re everywhere in the alternative music industry. They’re how we define ourselves and show the world we’re proud to be different, and you’d struggle to find a rock star without one. Indeed, this is an art form which has long been linked with the rock and metal world. Few tattoo artists, however, can boast such great links to the music industry as Wil Purnell of York’s very own Black Tides tattoo shop. Having inked a whole host of up and coming bands, he has now become a regular fixture at Sonisphere, where his craft has placed him in the enviable position of mingling with the stars backstage. 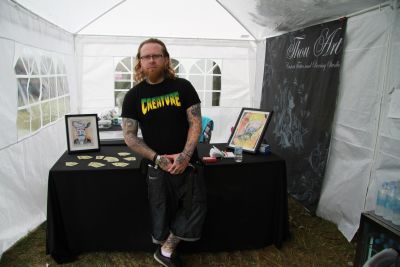 After starting out as a piercer, tattooing for Wil was a natural progression, and he’s gone from strength to strength, branching out from working alongside a friend to travelling more widely and securing Black Tides as his very own tattoo shop. Despite having his own business now, however, Wil is quick to stress the importance of having contacts. “It’s a good thing to be a tattoo artist and know more tattoo artists,” he tells us, “do not just be satisfied with thinking you know everything and do everything. There’s a whole world out there.”

What’s more, contacts within the creative industries have got him to where he is today, with his big break at Sonisphere coming about thanks to tattooing an old friend in the music promotion business. “He’s basically offered me a chance to tattoo some fantastic bands at one of the UK’s biggest festivals because we were old friends, and he trusted my skills as well,” Wil explains. “It has been a fantastic opportunity for me!”

Now the highlight of his tattooing year, Sonisphere has enabled Wil to tattoo stars including members of Skindred, Deaf Havana, Sylosis, Me Vs. Hero and Glamour of the Kill among others. “Working at Sonisphere has been the best thing I’ve come across since God knows when,” he exclaims, “All year long I work as hard as possible in the shop and basically just think about that one weekend where I have such a crazy time.” With his tattoo stall nestled between the backstage cabins, he’s been able to meet dozens of artists and admits that at times he’s been starstruck. “I keep my cool,” he makes clear, “I never, ever freak out. But there are so many teenage heroes just kicking around. It is intense, especially when you look up and see Iron Maiden staring at you!”

As well as the chance to meet his idols, this career is one which offers Wil the chance to embrace his love of art. “It has become consuming from an artistic point of view,” he admits. “You don’t realise until you become a tattoo artist that it’s an ongoing thing every day. You think about it all the time, you work on it all the time, you’re constantly in it. In a way I’ve lost part of me to my job, which I don’t mind, because I love it so much.” As well as creating tattoos, this artistic drive inspires Wil to produce paintings, and he has also worked on artwork for Sonisphere and Bloodstock, further allowing him to explore the links between music and art. 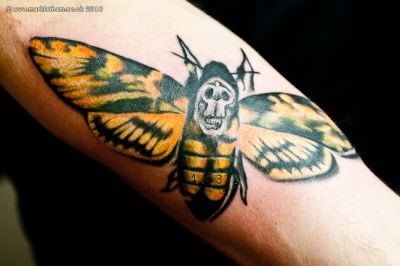 As for tattoo design itself, Wil’s roots lie with traditional American sailor work, but with a distinctively modern twist, encompassing a liking for the bizarre and a tendency for horror influences. “Some people don’t like what I do because I’m a bit off the wall,” he admits, “I don’t like to do mundane straightforward things. I like to surprise people and make them go, ‘Well, I like your tattoo but I wouldn’t have it!'” Provoking a reaction from the work once it’s created just drives Wil’s passion further, and viewing his clients’ faces when they see their design come to life makes this a career with definite job satisfaction.

Despite his love for all things crazy, however, it’s clear that what matters most to this tattoo artist is creating designs which really mean something, with each of his own tattoos being deeply connected with good times and friendships. “It doesn’t always come down to talent and style,” he explains, “It’s more about connections with people.” Indeed, the social links to tattoos are so important to Wil that he refuses to be tattooed by a stranger, preferring instead to build a relationship with the artist, linking them with good times in his life, before committing to letting them loose with a needle.

Originally hailing from Teeside, Wil attended university in Middlesbrough and went on to work in Sheffield before eventually settling in York, like ourselves. Ever proud of our Yorkshire roots, we are keen to enquire after his adjustment to Yorkshire and views on Northern life. “When I came to York I felt more comfortable in Yorkshire to be honest,” he reveals, and after ten years here he seems quite the Yorkshireman. “I’m more of a Northern guy than a Southern guy,” he continues, as we chat about his travels over the years, ” I can deal with the South for so long, but the North’s more chilled out I think.” And what about his views on the alternative music scene up here? “I think for the size of the town, it has got really good promise,” he answers, before revealing a fondness for Northern bands including Sheffield’s Black Spiders and York’s The Fallen among others.

As we chat about the adventures his career has presented, it’s easy to see why so many young people are clamouring to get a foot on the tattooing ladder. With so much demand, the industry is becoming increasingly difficult to crack, but Wil explains that likeability, genuine passion and sheer determination to succeed are the key factors when aiming to impress an artist. What’s more, gaining relationships within the business is absolutely vital – “The social aspect to tattooing goes hand in hand with the actual job,” Wil continues. “If you don’t get on with the people you associate with, then it just doesn’t work.” So does he have any more advice about what it takes to get that prize position as an apprentice? “Persistence, talent, and… yeah, persistence,” he says, laughing. 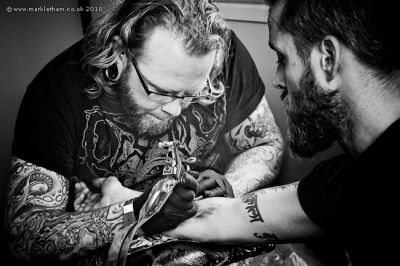 As we look to the future, we wonder who Wil would most like to see in that tattooist’s chair. “Anyone from Metallica would be awesome,” he replies, grinning, before dreamily imagining the host of stars this year’s festivals could bring. As for the rest of this year, there’s only one thing on his mind: “I’m just really looking forward to Sonisphere!”