Division Promotions is built on a foundation of obsession for great music, and all that comes with it – interesting bands, awesome gigs, albums, managers, rave reviews and exciting interviews. James Sherry helped to create Division, and here he tells us how knowledge and passion can get you to where you want to go. As well as being in PR, James’s career began as a music journalist. He started very young in the industry; at 16, James already had work experience with Metal Hammer and a fanzine under his belt. Quickly snapped up by Metal Hammer as a regular columnist, James was a contributor for five years working under legendary music journalists. He then went on to work for Kerrang! for ten years. Subsequently, James set up PR company Division with an equally music-obsessed colleague, Zac Leeks, with their wealth of contacts made from years of experience in the industry. 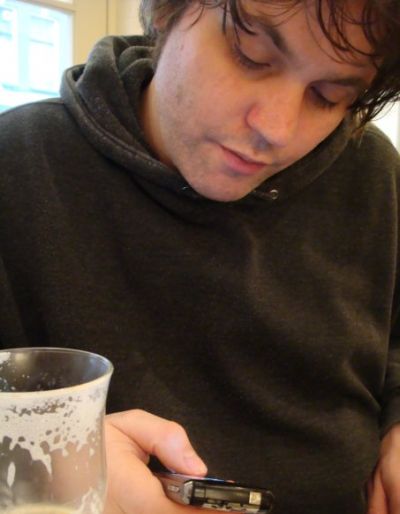 “You’ve got to be out there every night, going to gigs and meeting the people”

S] What has your experience been like, going from music journalism to PR?

JS] “As a journalist you’re dealing with PRs all the time, trying to get you to go to gigs, write about their records and get you to listen to stuff so it was quite weird going from the guy who was being called up and e-mailed all the time to being the guy on the other end, hassling people to come to see the band I was working with.”

S] What are the highs and lows of working in PR?

JS] “It’s the best job in the world when it’s going well and people are interested. The worst part is when a band is more niche and not instantly understandable, and people don’t have the time to listen to their album. It’s frustrating when you’re constantly harassing people, but not getting anything back and then you’re in the firing line from the band, the management, and the record label. There are no guarantees with the press, if you don’t get the coverage that you’d like or the reviews aren’t good then there is nothing you can do. But when it’s going well you really feel like you’re doing something positive to help the band and build them up a fan-base and further their career.”

S] What have been your best moments?

JS] “Gallows was definitely the most exciting campaign. From the first time I saw them they were just a phenomenal live band, and we were able watch them go from playing little pubs in Watford to massive success. Likewise with Enter Shikari, being part of that ascent and how popular they got was really exciting. Getting to work on campaigns like The Who, who are already established and amazing, a band I’ve been a fan of for years, that was really exciting too.”

S] What are the challenges that you face as a PR company?

JS] “The music industry as it is at the moment is a constant challenge. The fact is that there is so little money about now and that bands are often having to do more things on their own. People are more reluctant to actually buy records, which makes things difficult. Despite that there are still lots of exciting things going on. Though sometimes it feels like it’s a much smaller industry, the up-shot of that is the people who are in it are really passionate about it; it’s all they can do and it’s all they want to do.”

S] What keeps you inspired when things aren’t going so well?

JS] “As long as there is exciting music out there, that will be my drive. Occasionally something comes along that blows me away and that keeps me motivated.”

S] What advice would you offer for people interested in journalism and PR?

JS] “You’ve just got to get involved in the music scene. You’ve got to be out there every night, going to gigs and meeting the people and getting involved in whatever aspect you can, even putting on gigs yourself. There are so many websites you can write for to widen your skill-set too. That’s all I did at a young age, and it’s no different now. You’ve really have to make it happen yourself; you can’t rely on other people to put a job in your lap. You can go to as many universities as you like studying journalism but it won’t make a difference if you have no passion and you’re not out there doing it.”

S] And for those looking to gain success with their own music?

JS] “So much of it is who you know in the industry. It’s sad but it really is like that. To get those magazine features and the journalists interested in you, your band or whatever, you really need a personal relationship with them. The internet is great and it’s made for a level playing field for people to get their music out, but it means that there is so much out there, and journalists get absolutely inundated with endless e-mails full of links and mp3s. The advantage of hiring a PR company like ourselves is that the journalists build up a relationship with them and trust them that their acts are really worth a listen. Having said that, there are many bands out there doing it for themselves, you just have to get out there and make it happen.”

S] On your website, you encourage people to send you their CVs, what do you look for in a potential employee?

JS] “A real passion and obsession for music, it has to be something that they live and breathe, evidenced by the fact that they go and see bands all the time, meeting them and their managers. It’s a horrible word, networking, but it’s such a big part of it- you can’t do it if you don’t know people. It’s a job that takes over your life.”