For our next industry spotlight Ed Taylor talks with James Henderson of Step By Step Guitar Tuition. James has been a dedicated guitarist for many years and with a new tuition website launched just a couple of months ago we get the chance to sit down and discuss his new site and his inspirations. 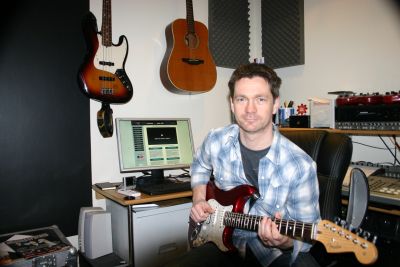 S] stepbystepguitartuition.com is different from other tuition websites as it has you as the sole dedicated tutor. How did the initial idea come about for the website?

JH] “Well initially, the idea came about when a friend of mine had been scouring the internet looking at various sites, he thought, although there was a lot of content on the likes of YouTube he found that it was too difficult for very basic guitarist to learn. So, we decided to create a site that was aimed specifically at beginners moving on to intermediate players, we weren’t really going to take it further than that because there’s already lots of content out there for the advanced guitarist. We believe there is a gap in the market, so we’ve taken it down to the very basics for the beginner. New guitarists can start learning from the simplest thing such as how to play a note, how to pluck a string, there’s absolutely nothing out there that does that.”

S] Who or what inspired you to learn the guitar in the first place?

JH] “I think my first inspiration was actually Gary Numan funnily enough who was featured in your first issue [Winter 2010]. I remember getting heavily into his music when I was just nine year old, and then onto the likes of Kiss and Van Halen, Ace Frehley and Eddie Van Halen were also a big influence.”

S] You’ve played in many bands before but switched to teaching, what made you make that switch?

JH] “Originally, I wanted to be a rock star but that didn’t happen [laughs]. Teaching was a good thing to fall back on and I think it’s great to pass on your knowledge to other people and watching them develop musically.”

S] Do current students who come for lessons find it helpful to have online tuition available?

JH] “Yeah they do, a lot of them have used the site as well as having lessons, it’s a great tool for both me and the students because I can tell them which modules on the site to study from. It’s also ideal reference point.”

S] How would you explain the benefits of learning online with SBS?

JH] “I think the benefits it has in contrast to other sites is that it breaks songs and techniques down to an easily understandable format and we take it very slow. One thing we’ve found from other sites is that they tend to be too fast. They have the point of view that people can already play but you wouldn’t be going on that site in the first place if you could already. So we wanted to make our site very accessible and easy to understand.”

S] What do you consider to be the unique features of the site?

JH] “There’s actually two parts of the site, the first part is in modules that takes you ‘Step By Step’. This is a syllabus that takes you from you first chords, which gradually builds with scales and rhythms and then progresses for you to become a competent guitarist. The other part of the site is the song workshops which takes you through songs in a variety of styles, where SBS is different in this aspect is that the songs link directly into the syllabus. As you learn new chords and techniques we show what songs these are applicable to and then you can learn them with the key skills in place that are needed.”

S] Would guitarists who are wanting to sit graded exams find sufficient input to help them through their grades?

JH] “Certainly. It teaches all the different chords, scales and chord sequences etc. It is definitely a useful aid for anyone wanting to to sit grades from the various examining bodies. At present I take my students to Grade 8 and beyond (London School of Music) in both electric and acoustic.”

S] If someone requested a song they’d like to learn would you consider doing a song workshop on it?

JH] “Yes. We have a part in the website in which users can make suggestions as to what songs they’d like to learn.”

S] What are your plans for SBS in the future?

JH] “Well, we’re giving it a year or so and then we will branch off into bass guitar, keyboard and drum tuition. We’re also going into schools, with two already on board. Lots of schools now have music workshops so we’re trying to push the websites advantages to all schools where the students can log onto it and use it as a learning facility.”