We discuss career highs and the road to the top with celebrated Glaswegian beat-boxer Bigg Taj following his appearance on the Aspire TV stage at YO1 Festival 2014. 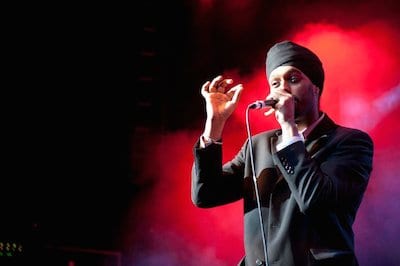 S] Hi Bigg Taj! How did your YO1 Festival set go?

BT] “The feel was brilliant performing at YO1 Festival on the Aspire TV stage. I did a performance with Spee 69, beatboxing – it went down really well actually. The tent has been packed out!”

S] What’s the vibe and the scene like in your hometown of Glasgow?

BT] “The scene is good. I’ve done a lot of big support slots in Glasgow, so that’s really helped me and inspired me. I met a lot of my heroes, and that’s really inspired me and given me a kick in the right direction when I’ve been feeling down. For example, like a month ago we supported Dead Prez – they’re heroes of mine I’ve been waiting for ten years for them to come through, so it was amazing. That’s where my inspiration comes from – playing the big shows and seeing how these artists perform, and how I compare to them as well.”

S] What are your biggest inspirations outside of music?

BT] “Outside of music I’m a youth worker, and my inspiration comes from the young people themselves – not just for beat-boxing but for raps and songs as well. My inspiration comes from my young people – what they tell me and what they go through. They tell me what’s going on with them, and I get inspired by it and I write. I watch a lot of martial arts, so I get inspired by a lot of UFC fighters, old-school prize fighters and things like that as well.”

S] How did you and Spee get together originally? What was it like when you guys got together?

BT] Me and Spee were chatting back in the MySpace days, and he says he thinks he was staying in Glasgow at the time and bumped into me in town. I didn’t know who he was or what he looked like, and this dude was bigger than me. He called and said “Are you Big Tajj?”… I thought he was gonna beat me up. So we kinda back-and-forthed for a few weeks and he get me some gigs in York at Herbal Mafia. So just like that, we just clicked.

S] What’s been the highlight of your career?

BT] “My highlight has been supporting guys like the beat-boxers I was listening to growing up. Obviously doing the UK Beat-boxing Championship was excellent as well, and just playing overseas is always good – we did Amsterdam last year which was incredible. It’s just about entertaining people, you don’t need to be the best rapper or beat-boxer. If the crowd’s entertained your job is done.”

S] What would be your advice for any young, up-and-coming beat-boxers or rappers?

BT] “For beat-boxers, what I’d say is keep it original. What I see these days online is too many sound-alikes. I came up in the days before YouTube, when you couldn’t learn online. A lot of beat-boxers who came from that kind of background were unique and created original sounds, because you couldn’t really copy each other.”

S] What do you think of Aspire TV and what they’re trying to do breaking artists in smaller areas?

BT] “I think this festival having the Aspire TV tent has opened doors for people to perform to people who probably wouldn’t come to hip-hop gigs and grime gigs. This is open to a wider audience – a lot of families come through, and probably a lot of people who can’t come to clubs because we usually perform at eleven  at night. Liam –Kritikal has opened doors for people like myself and Spee as well, to perform to people who’d probably never seen us play, who’d probably never heard of us before. This is a nice way to get exposure.”

S] Do you think location matters for emerging beat-boxers – do you need to move to a bigger city or do you think you can do well anywhere?

BT] “I think it’s always good to leave your home town and get out of your comfort zone. You can be a hero in Glasgow, but when you step out of there nobody knows who you are, and that’s a scary thing. When I performed today, before I got on stage I was really nervous, because nobody knows who I am here. You don’t need to move to another city, but try to go to other cities and try to get gigs. Always stepping out of your comfort zone is a good thing.”

BT] “We’re playing with Method Man and Redman in July which’ll be awesome. I’ll be making music, being creative and doing other things too.”