In our next Reverbnation spotlight, we chat to Jupiter In Velvet! 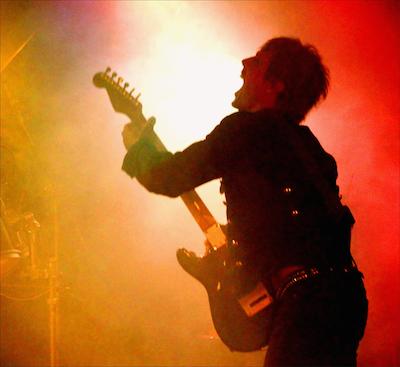 JIV] “My influences are rather vast. I love music, always listening to so many different types and looking for something in the song that I like. However, if I had to narrow it down to some of the bands and artists that majorly impacted me, that list would include: The Beatles, The Rolling Stones, The Who, Little Richard, David Bowie, Jethro Tull, Led Zeppelin, The Pretenders, Duran Duran, Adam Ant, Prince, Simple Minds, U2, Green Day, Nirvana, REM…it is hard to stop!”

JIV] “Inspiration is just life as it happens to me and those around me. Usually the song is my own experience but sometimes I absorb what I see others going through and then blend it with a similar experience that I’ve had. Many of my themes are spiritual in nature but I write the song in such a way that it leaves it open to the listener to interpret the words and feelings for themselves and their life for where they are at that time.”

JIV] “It is hard to say that any song truly defines my sound. If you listen to one of my albums one will hear quite a divergence of sounds and styles, from punk to harder rock to pop to what I call electro dance rock. From my first album ‘Screaming the Love Behind the Scars’, the songs ‘Jupiter In Velvet’, ‘Love Is On My Side’, ‘Rock & Roll Girl’ and ‘Comet Come On’ define some of the different styles and sounds I switch off between. I am always looking for something new, an unusual chord progression, a new sound, a different vocal sound and phrasing. I get bored easy.”

JIV] “Yes, be patient with me! I will perform live again within the next year – I promise!”

JIV] “Expect lots of energy and to go on an emotional trip! I like to have fun, but fun for me is experiencing and expressing the wealth and rich tapestry of life’s many emotions through my songs. I want to connect with my fans. Nothing gives me greater happiness.”

JIV] “My biggest challenge right now is getting my music out to a bigger and broader audience. It is very competitive out there and it takes a lot of work, a bit of luck, the right people behind you and a big chunk of cash to make the light shine bright enough on your music so that people will stop and really listen.”

JIV] “Well, first off I will be shooting a video at the beginning of September for my song ‘So Automatic’ from my upcoming third album entitled ‘Glitter On The Sun’, which will be released September 23. I will be working with a very talented young director named Simon Riley from the UK. After that I will be doing promotion for the new album and putting a band together to do some touring – starting in the UK of course, beginning in January 2015.”