For our next Reverbnation spotlight, we chat to The Nearly Deads’ Theresa Jeane about music and inspirations. 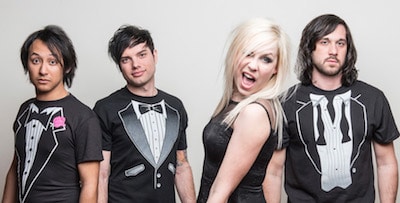 T] “I have so many! Billy Joel, Avril Lavigne, and Christina Aguilera when I was younger, then I got introduced to punk- The Distillers, Alkaline Trio, The Used, Taking Back Sunday, Brand New, and My Chemical Romance. I also love Hole, The Pixies, and Garbage.

T] “I’m pretty straight-forward when it comes to my lyrics. I hate sounding cheesy or cliche, and I avoid it at all costs! The biggest thing to remember about females, is that not every song is about a break up or some guy. We have a lot more to offer and a lot more to say than that. Although I do write songs about relationships – ‘I Said’ there are also songs about the way I see the world, like “Fact and Friction”, trouble between bandmates like ‘Easy Way Out’, and the music industry in general like ‘Invisible Tonight’ and ‘Paper Doll’. The most important thing I focus on when writing is being honest and genuine in a way that is general enough for listeners to pull their own meanings out of the songs.”

T] “It’s no secret that we just released a full-length album, but I’m already brimming with ideas for the next one! Right now I’m working on something that has a bit of an odd chord progression. I like to throw classical influences into the mix every now and then, since I am a classically trained singer, and when you start turning these interesting patterns into a punk rock song- you get The Nearly Deads’ unique sound. Add to that the grungy progressive styling of my co-writer in the band Steve Tobi, and you really get a sense of the melting pot of influences we really are.”

T] “We love you and promise we will come tour there someday! Who would have known that in this day and age music could mean so much to people halfway around the world. We are floored every day but the tremendous amount of love and support our fans show us, and are absolutely aware that we have a growing fan-base in the UK! It became really apparent while shipping Kickstarter prizes, an endeavour that helped us earn over 10k for ‘Invisible Tonight’! So many packages were getting addressed to the UK, it still blows us away knowing you’re out there waiting for us!”

T] “A lot of sweating, head banging, jumping, dancing, circle-pitting, fist pumping, and overall: a damn good time! People pay good money to come to a show and we feel a punk-rock sense of responsibility to make sure they have an amazing time! It’s also what we love to do, so it’s a win win. We recently gave The Orpheum Theatre in Wichita KS their first ever circle pit! It may have been small, but it was mighty! Past performers there include everyone from Elvis to Houdini, so we were proud to make our little moment of history there as well.”

T] “Not touring! Honestly, it’s my job – so when I’m not on the road, I feel like I have nothing to do with myself! I’m totally lost! However, we are planning our fall dates now, so I won’t be bored too much longer!”

T] “We will be releasing a few new songs! As part of our Kickstarter campaign, people could choose to have us write their very own song. We are working on these and will have them up on our YouTube channel soon. We’re also planning a nationwide US tour this fall – so stay tuned for updates from us!”