Travelling freak show, the Circus Of Horrors are back to take on the UK, this time to promote their new show ‘The Four Chapters Of Hell’ and celebrating their 15 year anniversary. We chat to Dr Haze, from The Circus Of Horrors at Victoria Hall, Hanley, Stoke-on-Trent, and get an insight into the plans for the new show… 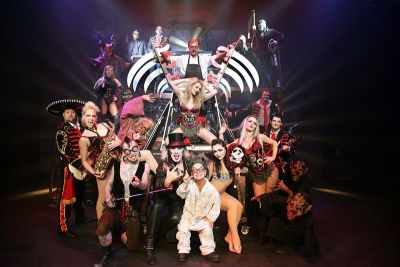 “The only sure thing in life is death”

S] Just for the record, what is your name and your age?

DH] “Dr John Haze, I am the undead ringmaster for circus of horrors and I am 624, looking well on it don’t you think?”

S] How would you sum up the essence of your show?

DH] “Well, it’s an alternative rock and roll circus, we try and encompass bizarre, unusual but also with a lot of beautiful acts, the sort of acts you would see in Cirque Du Soleil but all to rock music and done with a forked tongue firmly in each cheek.”

S] Do any acts cause genuine pain and if so how do they make it look so easy?

DH] “Adrenaline. Endorphins get you. If you ask a lot of people to get to rehearse, like our Danny who staples things to his face, and also hair hanging that’s all pretty painful stuff, and even fire eating, if you asked me to do some fire eating I’d be rubbish at it, because it’s so hot but when you’re actually doing it in front of an audience you sort of forget that and the professionalism takes over and the fact you don’t want yourself to look like an idiot so you just do it – you just get on and do it, and that is sort of how you overcome the pain factor. It’s also a case of knowing your anatomy, so if you do something, if you’re going to put a pin in yourself or swallow a sword, the important thing it knowing how to do it. If you know how to do it you can overcome the gag reflex, it can take two years but if you do that then you can do it without too much pain, but there is always a bit.”

S] You guys have been going for 15 years now, that’s quite an achievement, how do you keep your ideas fresh and your audiences coming back for more?

DH] “I look at different things, I look at current affairs, try to look at greatest hits. The problem we have is if you change it too much, if you change it fundamentally, the problem you have the is people say ‘Where’s this person, where’s that person, Dan was my favourite’, if you lose all of those and replace with others people will say that, like going to see your favourite band and they don’t play your favourite song you don’t want that, you don’t mind seeing a bit of new, you want to see a new show. The important thing is to mix it up.”

S] What are your new plans?

DH] “We already know what we’re doing next year in 2012, that’s already in the planning stages, it’s going to be called ‘The Ventriloquist’, it’s about an evil ventriloquist dummy. It will be a part of the show, and then he will go on and tell people to do bad things, that’s been inspired by a number of films. When I was a kid, I remember this film and it really scared me to death. So that will be a great topic for a new show and it’ll fit in really well, so we already know what the next show is going to be, exactly how were going to do it, we know the title and what were going to do.

S] We were very sorry to hear about your artistic director’s passing, you say this show is a dedication to his memory, what parts of it specifically resonate his meaning and influence to your life?

DH] “The end of it, he [Pierrot Bidon] was obviously…Circus Archaos was his bag, he was the first one as far as I’m concerned to start the alternative circus movement before Cirque Du Soleil, and he was an inspiration to all of us, with Circus Archaos. When we started we were very much in that vein, like a horror version of Circus Archaos if you like, so we did that, but he was great friend you see, what we would do first of all – he would travel with us and spend a lot of time directing it. As time went on I took over the directing mantle more and more but I still wanted to get him back in for a few days at the beginning, I would go to France and tell him my ideas, then we would talk it over, come back and go through the show, and say, ‘I don’t like that bit, why don’t we change this?’ He would come up with new things. So he was a great guy to work with as far as I’m concerned, so it was a great loss when he died, but there you go that happens, the only sure thing in life is death.”

S] How did you get into this show, as it’s not the most mainstream way to get into theatre?

DH] “It’s not mainstream, it’s extreme. I think what we have done is take the extreme to the mainstream. If you look in there tonight there is quite a mixture of people. You’ve got all the alternative people that come and enjoy it, which is great, but in addition to that there are a lot of normal people, but unfortunately tonight a lot of normal people were at the front – I think it must be they booked the seats first. I think when we started doing the TV shows like ‘Don’t Try This At Home’ and ‘Ant And Dec’ – we created a show that fit an early evening Saturday night programming and it went down a storm. By doing stuff like that, you open yourself up to other audiences. So Bizarre are still our sponsors as are Classic Rock, Metal Hammer, Kerrang, Terroriser and all those magazines but just as easily, we would talk to News Of The World – so its across the board, but we have created that ourselves by taking the extreme into the mainstream.”