Andrew McCaffrey has been making a name for himself locally and nationally in Canada for his sculptors inspired directly by bands and musicians that inspire him. Each of his works intricately examines artists including Trent Reznor (Nine Inch Nails) and Sascha K (KMFDM) in their most emotive, personal and aggressive poses while on stage performing. We spoke to Andrew recently about what inspires him and the next phase of his creative progression. 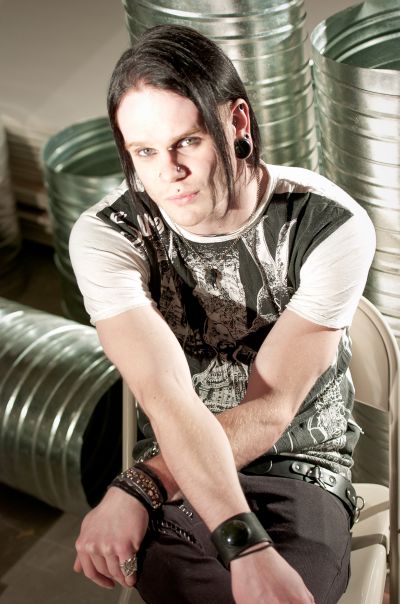 “Sculpting is a psychological fixation for me”

S] What kinds of films and other artists inspire your work?

AM] As for films, I’m a nut for animated movies. Don Bluth, Ralph Bakshi and Tim Burton’s early works have touched me the most. As for other Artists, I’ve been most influenced by the notable contributors to Heavy Metal Magazine, like Luis Royo, Simon Bisley, Alfonso Azpiri, Olivier Ledroit and such. Funny enough, one of my largest inspirations today is that of my friend Tod Waters, a fashion designer from LA. He runs Junker Designs, and his clothing tends to distort the human body in such a way that provokes me to create. When I wear his clothes I just feel so fashionably contorted that I must depict the way I’m dressed! Lately I’ve been very inspired by the works of Gottfried Helnwein. He’s pretty much my mentor at the moment.

S] How can fans get hold of your work at the moment?

AM] Anything I do is pretty much available through me personally! Best bet is to drop me an e-mail or Facebook message with anything you’re into. And I love making new friends so don’t be shy!

S] How will you be developing as an artist into ’11, can you tell us about any new ideas or concepts you are working on, also do you plan to utilise multimedia methods in the future?

AM] Funny you ask about ’11 because 2010 was supposed to be the big one for me. Things this year didn’t go as well as I had planned. And, I am understating that. At this point I’m looking to make my music-inspired work as publicly available as I can. I’ve been getting requests for copies of my musician sculpts for quite a few years now and I’d like to share the works I’ve made. Further, I’d also like to expand my creativity to my own personal, even spiritually inspired work. As for other multimedia, I’ve got a very seasoned yet rather dormant career in animation. I’m in the midst of sorting through my own creative ideas for short films and music videos.

S] What music inspires you most when you work?

AM] Traditionally I’ve been the ‘angry goth kid’, so I’ve always been personal with bands like Type O Negative, Nine Inch Nails and KMFDM. Lately I’ve been listening to differing alternative scenes. I’m really enjoying post-hardcore and some alternative metal. I’m even exploring very unique, culturally fused world music. I need to listen to something that’s going to set the tone for long hours of sitting in one place for a long time. None of the pieces I make are in anyway time-efficient, so I need something that sets a stern and time friendly pace. If it’s early morning and I need to comfortably fuse into the day I’ll listen to something like Enigma or Sister Machine Gun. If it’s late afternoon and I feel like energizing I’ll listen to something like Cancer Bats or Danzig. With the bulk of what I do being music inspired I need to vary in my tastes! 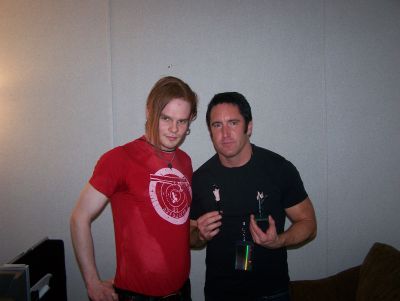 (Andrew with Trent Reznor and his figure – image by Adrian Curwen)

S] You have received attention from alternative artists including Left Spine Down and Front Line Assembly for your work – what has been some of the best feedback you have received from people within the media and music industry?

AM] Ah, thanks for asking about those gigs! I’ve had some amazing times with those bands. The greatest thing about what I’m doing, if I may modestly say is that there isn’t really anyone else doing it. The best reactions are always the ones that catch everyone off-guard because they didn’t think of something like this being attributed to their musical influence. Lately, I’ve developed a name for myself that a great deal of very visible artists now know. Many artists know who I am before I meet them, which, let me tell you is more flattering than anything.

S] Do you find sculpting is a release for you – what does it mean to you to be able to continuously practice your art?

AM] It’s all I know now. As mentioned earlier the last year has been a struggle for me – so mundane. Day-to-day life, which is always the hardest prerequisite action for all of us artists

alike has become incredibly difficult. Sculpting has basically devoured the bulk of my mindset. I’m comfortable enough to share that I can’t even hold down a day job to keep it financed. To summarise, sculpting isn’t even a release, it’s almost more of a psychological fixation which I must tend to.

S] Would you ever expand outside of just working for your favourite artists and away from the “cult artist” tag?

AM] Oh, of course! I believe that’s how all successful artists become so successful. I’d like to expand my influence to every aspect of creativity, to become somewhat of a guru of my own style. What I envision is a signature reaction applied to my signature style, where I see fans (or even enemies) of my art seeing my work and knowing it’s me.

S] Tell us about the concept of “Emotive Surrealism”?

AM] Wow, thank you for asking! That really hits home with me, personally. ‘Emotive Surrealism’ is a concept I created in my teens. It’s a style of geometrically concentrated sculpture (or other media but I am a sculptor), mixed with hidden messages of the human emotion. I’ve always coined the explanation of surrealist imagery mixed with, well obviously human emotion. The two themes, to me anyway, are the most paradoxically differing, yet at the same time complementary concepts. I want to create warped, complex and all around visually stimulating pieces of sculpture with hidden themes of emotive messages inside. To me, there is nothing more unreal than the surreal, while nothing more real than our own emotions. Combining the two creates the climactic aesthetic that I’ve always aimed to convey as an artist. I suppose the rest is up to the viewer’s interpretation.

S] What’s your biggest challenge as an artist?

AM] I suppose it’s the climate of my surroundings. My hometown of Edmonton, Canada does indeed have a strong, growing and all around underrated arts and music scene, just one that is very hard to tap into with new ideas. Being so far North West, nobody really considers anything but oil money and hockey players to come from here. Tattoos and photography, which are in my opinion the most popular forms of alternative arts and media are doing incredibly well. I’m pretty well known, particularly here, I just need to start making some money! I suppose that the nature of our influence is so subdued by a city that has never really been visible in the arts scene. Keep in mind that once again, no one has ever been as public with figurative sculpture in the alternative scene as I have, at least not in this way, using underground music personalities as the primary inspiration. It’s an idea I need to nurture and not fight with. Lately, I suppose the biggest battle has been with myself and my own personal challenges.

S] How easy or difficult is it for you to sell and market your work?

AM] Well it’s hard to say because selling and marketing are two surprisingly different things with my work. As mentioned, the market for my items, now this is the music figurines in particular is very ‘touchy’. As said I’ve had offers for copies of my work for quite some time now, yet no real way of releasing them as a product, or even a finished piece of art. That’s even made things conflicting with the musicians I’m hoping to license their image through. They all love what I do, I just need to make sure I release something dignified and commercially acceptable, if I’m putting their names on it. At the moment I’m working on developing packaging for these pieces. Surprisingly this has been one of the hardest parts. In the end, I believe the demand for art is not at all within immediate reaction, but the residual feelings that leave the viewer wanting more. Provoking the people is quite essential when making an expression.

S] What sort of process do you go through when creating a piece – take us through Sascha Konietzko of KMFDM for example?

AM] Cool, for all the pieces I’ve done, that’s a very good one to mention. Sascha, to me, is one of, if not the greatest of musical influences, not only in industrial music, but in contemporary music itself. Having a subtle, yet totally recognisable image, it created both the challenge, as well as importance of depicting him properly and respectfully. I’ve done it twice now, so I hope I’ve hit home on one of them! The 2006 version of Sascha Konietzko was modelled after footage from KMFDM‘s 20th anniversary tour in 2004. It saw me taking hours, upon hours of still frames from their live DVDs one of which Sascha gave me personally, and conveying them into my finished piece. As mentioned, Sascha‘s image is almost as important to me as an artist as it is to himself as a man. I know how visible my work is getting, so making sure the details are right and respectful to him is of the utmost importance to me. It’s greater than his mohawk, aviators and tattered shirts. I want to capture everything that is Sascha, to me, from the pose of his fist clenching his microphone over his keyboard to his leg leaning into the stage to express his anger. I want anyone looking to know that it’s Sascha Konietzko, not just through sight, but the feeling he’s given me and every other KMFDM fan in the world.

S] What’s your next big project?

AM] Currently I’m working on a large line of brand new Emotive Surrealist pieces. Madeleine Horn, an internationally visible fetish model, and all around close friend to me is helping both with the modelling and even the promotion of it. Along with the aforementioned arts and music, Edmonton’s underground modelling scene is a rapidly growing industry. I want to share my influence and accomplishments with everyone around me, in every scene, style and form around us.

For more information and to see Andrew‘s art, click here. 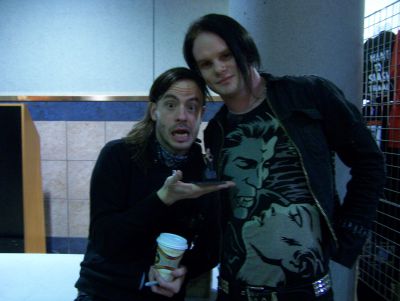 (Andrew with Liam Cormier of The Cancer Bats and his figure)