Bloodstock hots up once more, and this year you can expect nothing less than a beautiful armageddon of heaviness (and hopefully the apocalypse, but we’ll see to that later), and the latest additions are stark proof of that. Grab your tickets here. 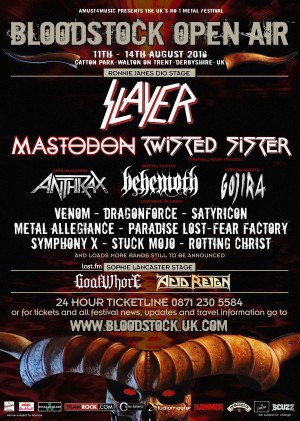 Already announced are three headliners, TWISTED SISTER (in their last ever UK show), MASTODON and SLAYER, plus special guests BEHEMOTH, GOJIRA and ANTHRAX.  Also on the bill are FEAR FACTORY, SYMPHONY X, SATYRICON, PARADISE LOST, DRAGONFORCE, ROTTING CHRIST, VENOM and ACID REIGN.  Many more are still to be announced.

The METAL ALLEGIANCE project joins the party.  You never know who’ll show up at a METAL ALLEGIANCE show, but the line-up confirmed so far includes Testament’s Alex Skolnick, Death Angel’s Mark Osegueda, Anthrax’s Scott Ian & Charlie Benante, Gary Holt from Slayer & Exodus, Mike Portnoy of Twisted Sister, plus METAL ALLEGIANCE leader, Mark Menghi, who had this to say about this year’s festival: “I’m so excited for Metal Allegiance to make their UK debut at one of the most metal festivals on Earth!  The perfect audience to share this brotherhood of metal with.” Who else will show up? You’ll have to be there to find out.

Also joining the 2016 line-up are Atlanta’s rap metal pioneers, STUCK MOJO.  Having reformed in 2014, the band are active once more and this year celebrate the 20th anniversary of their second album, ‘Pigwalk’.

GOATWHORE also join us as Friday’s Sophie Lancaster stage headliners.  The band are at work on their new album which is expected to come out this year.