My Ruin launch teaser and stream for new album

Los Angeles based underground metal veterans and DIY enthusiasts, My Ruin featuring vocalist Tairrie B, husband and multi-instrumentalist Mick Murphy and bassist Luciano Ferrea have announced that they will be streaming their new album ‘The Sacred Mood’ for 1 week starting Saturday, June 1 through Saturday, June 8. When it’s ready, it’ll be here: https://soundcloud.com/myruinofficial. 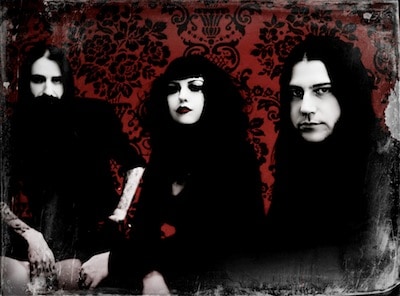 ‘The Sacred Mood’ is set for release on Tuesday, June 11 via iTunes & Amazon and the band have recently released a teaser video (also below) which includes a sneak preview of tracks ‘Monolith Of Wrath’, ‘Honey Of The Human Soul’, ‘Moriendo Renascor’, ‘God Is A Girl With A Butcher Knife’ and ‘Insomniac Moon’.

Vocalist Tairrie B says: “The atmosphere of the new album is heavily drenched in the heat of the South where it was recorded and fueled by insomnia filled nights in Los Angeles where it was written. “The Sacred Mood” is a subtle reinvention for My Ruin. In an industry that is ever changing, we’re not a band who pays attention to the current trends. We’ve found our sound and we simply do what we do while staying true to our roots. I think our fans appreciate our integrity and we appreciate our fans.”

The teaser was created by Tor Burrows of Notorious Design and features studio and live footage along with artwork by Manchester, UK based artist Kayleigh Brookes of The Little Room at House of Brookes who designed My Ruin’s new album cover.

The tracklisting is below…