By Charlotte Puckering May 7, 2015 Album, Reviews
No Comments

It has finally happened. After a lengthy 13-year absence, Coal Chamber have made their grand return to the music scene with new album, ‘Rivals’. This come-back is most certainly what you’d call long awaited, and ‘Rivals’ more than proves that the cult Californian alt-metallers can still blow the minds – and ears, for that matter – of those who are daring enough to take a listen. 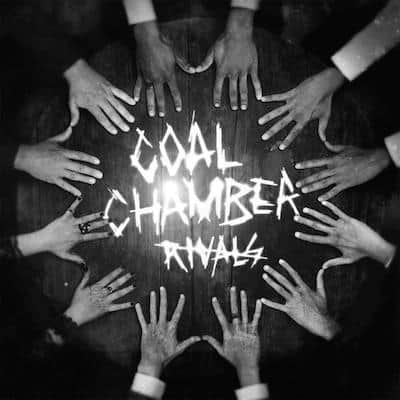 Coal Chamber have never been a band for the faint-hearted, and ‘Rivals’ definitely carries on this reputation. The album is opened perfectly with ‘I.O.U Nothing’, a track ideal for any ruthless nu-metal fan. A combination of solid drum beats, thrashing guitar and heavy, gritty vocals, this song conveys a mix of pure anger with fast paced excitement, giving their listeners a brilliant taste of what is to come throughout the rest of the record.

Following from the first track comes ‘Bad Blood Between Us’ and ‘Light In The Shadows’. Something that both these songs do is prove just how impressively far Dez Fafara’s vocal range can stretch. From dark and mysterious rap-influenced verses to blood-curdling screams; this type of vocal brings forth a sense of anger to the band’s sound, and in the world of nu-metal, we all know that a little anger will always go down a treat.

It isn’t all just about angst on this record, however. Fourth in-line, ‘Suffer In Silence’, despite Mike Cox’s relentless drumming pace, is definitely one of the darker tracks on the record. A combination of gritty guitar riffs and mysterious growling about sinister topics like the Devil from Fafara, this song truly is brutal, and gives you a taste of what it really would be like to, ‘Suffer In Silence’.

Coal Chamber certainly don’t mess around when it comes to the darker topics – further into the record we have Another Nail in the Coffin. A personal favourite of mine, the title of this track speaks instantly to what style of song this is. With Mike Cox opening with a demonstration of his double bass pedal, we know instantly that this is going to get real, real….real heavy.

The album as a whole isn’t one for those with a somewhat softer taste in music, it contains the pure force and power needed for the ideal alternative metal album. Each track contains the ferocious energy that complies with any head banger’s needs – the steely, frantic guitar riffs from the explosive ‘Fade Away (Karma Never Forgets)’ combined with the raw bass of the last track, ‘Empty Handed’, this album pretty much is the full package for anyone looking for their daily dose of old-school (read 90s/00s) alternative/nu-metal. Coal Chamber really have returned in style.