Anyone living in a cave for the past twenty five years will be unaware of Chris Cornell and the music he has blessed more than a few generations of fans with since the inception of Soundgarden, his first band, back in 1984. However for the rest of the musically capable world Cornell is known as the talented singer-songwriter with a voice so raw, unique and soulful that it can only be described as two steel bars being rubbed together and garnished lavishly with something so sickly sweet that it makes it irresistible to your ears. 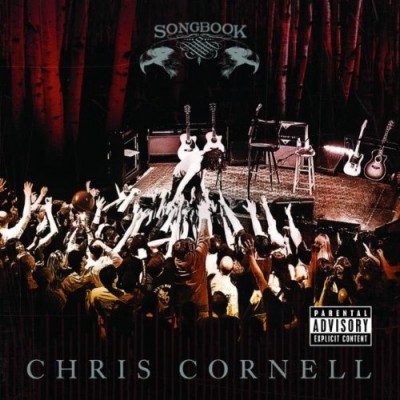 It is with this in mind then that ‘Songbook’, his first live solo album, engages, ensnares and draws in the listener. A collection of songs from his past and present, from the many projects Cornell has been involved in and some covers that have inspired him along his journey as a musician, make up the album and offer a stripped down insight into the voice that has propelled him through the years and attracted so many to his music.

The powerful opening track of ‘As Hope And Promise Fade’ sets the mood for the entire album by slowly exposing us to Chris’ vocal range and his emotive song writing style and we are soon bedazzled by the simplistic acoustic guitar and vocal arrangement of a song that originally featured as a hidden track on his 2009 album ‘Scream’ and was entitled ‘Two Drink Minimum’. The rest of the album proceeds with the same formula hereafter; songs reworked, reimagined and rewritten to compliment Cornell’s dynamic vocals, allowing them to glitter and thunder over a basic underlay of a single acoustic guitar.

The structure of the album itself is punctuated and arranged well showcasing a healthy mix of songs old and new, recorded at various venues along the way on his sold-out tour, with the occasional cover track such as Led Zeppelin’s ‘Thank You’ offering a slight divergence from the norm and again allowing Cornell to show his capabilities vocally as he takes this well-known track and adds to it a melancholic hue that has become part of his sound since becoming a solo performer.

Important career highlights are also present on the record as we are treated to an acoustic version of ‘Black Hole Sun’ from Cornell’s early days in Soundgarden which demonstrates how a great song can be transformed and transcend the barriers from grunge classic to acoustic ballad.

As the album reaches a close and new single ‘The Keeper’ becomes a memory we reflect back on a record that can easily be classed as a lesson in vocal gymnastics and one that punches the gut with raw emotion. However despite the album’s back to basics intentions and its clear one man, one guitar ethos, it lacks a certain je ne sais quoi (that means “I don’t know what”… FYI -ed) that the less die-hard fans of Mr. Cornell may be able to identify with.

‘Songbook’ also lends itself to other formats that might be more suitable for a record of its type. If listening to Chris Cornell croon and charm satisfies you wholeheartedly then this CD is for you. However, with a live album so personal and emotive, pixel junkies might be more interested in the DVD version of the tour. Extra-visual elements such as the intimate stage setting and the inclusion of Jeff Buckley’s red phone, which was apparently given to Cornell by Buckley’s mother after his death, all heighten the experience that are only hinted at on the CD. There is also the option of vinyl for any hardcore fans of music. Those who love to hear their favourite artists immortalised on a format so timeless that it gives the dynamic of ‘Songbook’; one man, one guitar and one voice, even more justice and resonance.