CD Review: Fox North Coalition – ‘A Block For The Wigs’

A world weary minstrel bemoans the state of the world and that no-man’s land in which he finds himself. A plaintive, echoing harmonica answers his laments as tumbleweed blows across the dustbowl of his psyche and snags in the windmills of his mind. Welcome to ‘Pleading For Sympathy’, the opening salvo from the strangely-titled, ‘A Block For The Wigs’, debut platter from York-based Fox North Coalition. 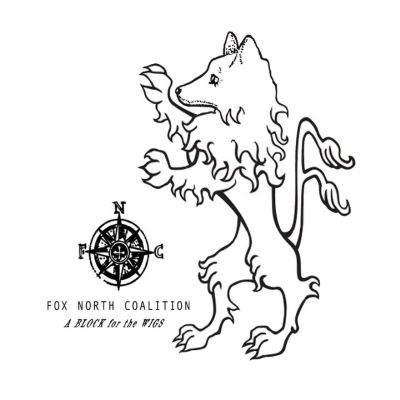 The aural equivalent of The Grapes Of Wrath, this is sepia-tinged and redolent of Woody Guthrie, Bob Dylan and the Great Depression. We’re a little surprised, actually, that it doesn’t come with a free collectors’ pack of food stamps…

With a touch of the late, truly great, Hank Williams and even the shade of the arguably greater John Lee Hooker, invoked in the shuffled, back-beat arrangements favoured by our trio, this is music drenched with pathos, poignancy and a wistfulness that no men under the age of forty have any business feeling.

Stand-out track, as far as we at Soundsphere Towers are concerned, is track two, ‘The Heist’, lifted to impressive, maybe even great, heights, by a superb female guest vocalist (Carissa Broadwater). But let’s consider the chaps, for a moment; vocals are the responsibility of Tim Fox, who also doubles as a mean exponent of country-blues harmonica. Steve Earl (cool) and hints of David Gray (sorry, Tim) emerge as his concise and off-beat lyrical tales unfold. The North segment of the Coalition is taken care of by Vin North whose stomping, yet restrained, occasionally barre-chord, strums are the element probably most responsible for the earlier John Lee Hooker comparisons. The final 33.3 per cent of the triumvirate, and we use the word deliberately, given that the Fox North Coalition was also the name of the UK administration that governed in 1783, is filled by drummer, Steve Bradley. The song’s sparse instrumentation add considerably to the Depression-era atmosphere of slim pickings. ‘The Heist’ is no flash in the pan, either; ‘Vampire’, while allegorical, will still have you clearing those pesky blood-sucking critters from the hay barn, quick sharp, while instrumental, ‘Desert Blues’, is the perfect soundtrack to some serious Sunday-afternoon-rocking-chair-on-the-porch action.

Less, for once, really is more. And while the tracks’ similarity to each other is apparent, this continuity actually works in the album’s favour; there is a pervasive and strangely alluring atmosphere of melancholy, and a bleak satisfaction is definitely to be had listening to the album in one sitting. Chuck in two, well-chosen covers, Steve Earl’s ‘CCKMP’ and Jim White’s ‘A Perfect Day To Chase Tornadoes’ and you’ll get the message. Mood music, then, most certainly and very well done at that.

Here’s a winner, from a trio with great potential and If you’ve ever pictured yourself in denim dungarees, a straw hat on the bonce, desultorily trundling along on a donkey and cart, with a ragamuffin band of malnourished and pasty-faced waifs in tow, then this is the album for you. For the rest of us, well, pass the moonshine, Grandpaw, and let’s go round again. It’s sure worth the trip.