In just six days time, (that’s July 12) Incubus release their seventh studio album, ‘If Not Now, When?’ Stick it in your diary, set a reminder on your phone or i-thingy, or whatever it is you crazy kids are hip to these days. Y’see you need this album for two reasons, the first being the overwhelming quality of the eleven songs contained therein. And secondly, you’ll be able to take a side in the forthcoming fan wars that’ll break out all over the place once this album has been heard and absorbed. Oh, yes indeed. This little bad boy is gonna split the fan-base right down the middle. Of course, this is Incubus so only the wilfully stupid would expect any given album to duplicate the preceding release. 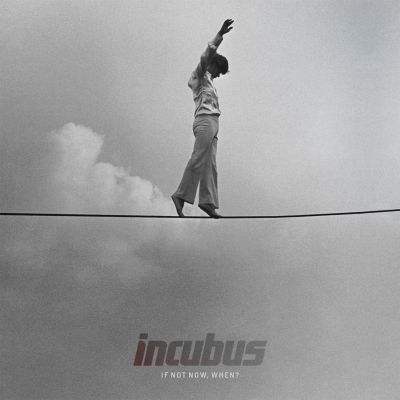 Forever restlessly searching out new roads to travel, new seas to sail and new directions to take, the band have deservedly earned both commercial success and critical approval over the course of six albums that have, at various times, incorporated everything from metal to jazz, from funk to hip-hop, from trip-hop to techno and just about anything else you could imagine.

Here, though, they’re so laid-back, so chilled and, yes, so commercial, it’s maybe stretching things to even class this as a rock album. Dreamy in parts, introspective in others, serene, even, one thing this album resolutely refuses to do is rock. Is this a bad thing? Well, the jury’s out at the moment…

‘S.C.I.E.N.C.E.’ this most certainly is not. Fans of that album will wonder if this is even the same band and while we’re on the subject, “band” is maybe a misleading word to use in relation to ‘If Not Now, When?’ The gentle rhythmic waves produced by Pasillas II, Kilmore and Kenney are purely backdrop against which Brandon Boyd croons, caresses, swoops and soars. Sorry, who did you say? Oh, right, Einziger, yeah? Well, the Incubus axe-man is either on holiday or attending a funeral. Maybe his own, because there are precious few sightings of him here. This is a singer’s album, make no mistake.

So far, so controversial but the songs, man, the songs! What of them? Well, title track, ‘If Not Now, When?’, gently rolls along in a U2 vein, a la ‘With Or Without You’, while ‘Thieves’ sees an oriental-style keyboard intro lead to a brief, and we do mean brief, six-string flurry before Boyd emotes over a backing of little more than snare and high-hat. And so on and so forth. ‘Defiance’, with its Page-like acoustic guitar intro invokes the spirit of ‘Led Zepplin III’ while one can’t help smile at the title; if this isn’t Boyd bracing himself for the inevitable back-lash we’ll eat our feet. And yours. With the shoes on.

So, is this Incubus chasing the mainstream dollar or resolutely upholding their artistic integrity and independence? We’ll need to wait for the next album to give a definitive answer but this release, judged entirely on its own merits, is…oh, hang on, sounds like the jury coming in…

A collection of beautifully crafted, subtly performed and pleasing songs that resolutely places this innovative act right on the border between rock and pop. For the sake of long term credibility and critical acclaim, though, not to mention the blood pressure of the fan base, we’d advise a lot more rock with the next album’s worth of roll.

For more information visit the official Incubus website and check out our interview.