In the eight years that have passed since horror-punk rockers Murderdolls dropped their debut album ‘Beyond The Valley Of The Murderdolls’ a question has always been out there…“Where is the next album?” Well, the simple answer is “When have they had the time?” 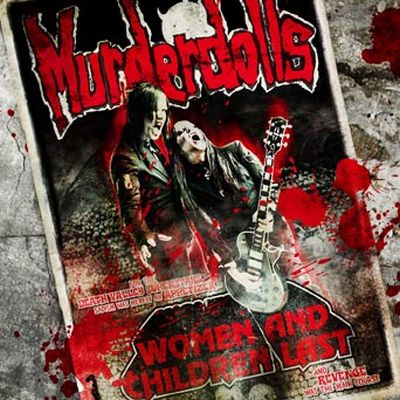 Frontman Wednesday 13 has been churning out numerous solo albums with tremendous success as well as the semi-resurrection of former band Frankenstein Drag Queens. Multi-talented Joey Jordison has seen his drumming attributes put to use with a number a massive projects, rejoining Slipknot for another two albums, performing on some of the largest tours in recent years with the likes of Rob Zombie, Ministry, Korn and Metallica and not to mention producing with some of Roadrunner‘s finest. As for some of the other members, Griffin went off to rejoin his band Synical, Slade had a fair bit of cult success with band Trashlight Vision only to settle more recently for Acey Slade & The Dark Party and as for Tripp Eisen…we all know where he is at now (if you don’t, he’s in prison).

So to catch up, Murderdolls are back, but only two strong. 13 and Jordison reprise their horror-fuelled roles minus previous members in this bold venture with hardcore producer Chris “Zeuss” Harris, the question now becomes, “Is this just another Wednesday 13 album?”

In comparison to ‘BTVOTM’ this album is much deeper and wiser; Wednesday‘s lyrics are less schlock-horror and more sinister wit, not to mention his voice is the best it’s been in years; Wednesday sounds heavier and more defined without depriving us and himself of his characteristic gravely scream. Joey‘s drums and guitars are as expected…..phenomenal; his riffs are heavy, power-laden beasts and yet, incredibly catchy, keeping you humming them for days. This is evident in tracks ‘Nowhere’ and ‘Summertime Suicide’. These are so upbeat and fun that you can’t help but sing along with the chorus even on the first listening. They also feel like they should be the theme tune for an 80s teen comedy, only with lots of make-up and fake blood.

The “happy-violence” theme is still strong for the Murderdolls but is carefully moved to the side for some of the album’s heavier tracks in the second half; first single ‘My Dark Place Alone’ borders on Slipknot like drums and guitars that totally split the album in two. This is the same for ‘Homicide Drive’ It is one of the real stand out tracks of the lot with a perfect balance of rock n’ roll brutality mixed spectacularly with Joey‘s awesome black metal-style drumming; tracks like these have laid the foundation for the significant changes that have happened to the Dolls‘ sound. ‘Blood Stained Valentine’ contains their more classic sound but the riffs are heavily amped and tuneful thanks to a special appearance from Mötley Crüe guitarist, Mick Mars whose wicked solos also appear on ‘Drug Me to Hell’

To be fair, a number of tracks that wouldn’t go a miss on any of Wednesday‘s solo records. ‘Rock N’ Roll Is All I Got’ would have made a quality addition on his 2005 debut solo ‘Transylvania 90210’ album as with ‘Chapel Of Blood’ which has an excellent rough and ready guitar tearing through it, but here these tracks are left in the dust and come off as filler, good but still filler.

Jordison‘s contributions to the 2010 version of the Murderdolls are more substantial. Albums like this show off the number of styles he can seamlessly merge as well as demonstrate his abilities as a multi-instrumentalist. His guitar work really shines through in ‘Nothing’s Gonna Be Alright’ from the searing mix of heavy lead and chugging rhythm to the effortless high-pitch cheerful harmonics perfectly compliment Wednesday‘s rasping tones.

Thankfully, over the last few years Wednesday has managed to keep this sound alive in the mainstream long enough for the Murderdolls to still be a relevant force worth re-uniting. Jordison‘s input was key in not making this another W13 album, it retains the same qualities but has more style as well as substance. Overall, this is a worthy follow-up to ‘BTVOTM’ and will provide the perfect creepy soundtrack to the summer.