On fire and skidding in sideways from their 2009 release, ‘DOS’ UberByte re-immerse you in their industrial dance tank with their third album ‘EXS’. 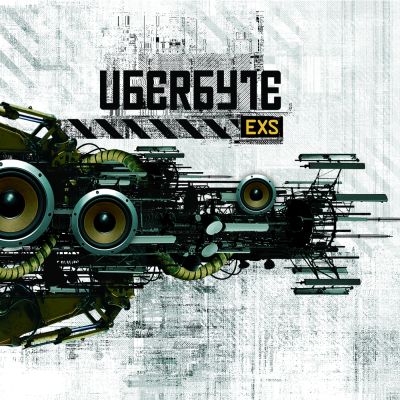 UberByte has a much more vigorous, no-holds-barred approach with ‘EXS’ compared to their previous releases. They have done away with their “scene” beats and created a more mature and complex sound that has allowed all of its members to shine equally.

This is evident with the album’s title track which is a total sonic-assault that delivers the most luxurious ultra-heavy beats on the album, this combined with the fearsome synths and subtle vocoding create a spectacular club-stomping experience. Meanwhile, ‘Break You’ is a solid body-mover that will have you sweating in no time but sadly, never really reaches a proper climax. This is a great track but is very ‘Standard Issue’ for the genre.

‘If Something Gets Hard’ on the other hand, is how Combichrist’s ‘Kick Start The Fight’ should have sounded. Ubergirl’s vocals effortlessly dominate this piece and work perfectly with the early Prodigy-styled electro-noise that tears through this fun and imaginative track. ’The Miracle’ has an aggressive power at the helm. On this, Uberman’s vocals are in no way compromised by the vicious brutality of this track, they separate like oil and water. All this along with the Ministry-esque samples that are spread throughout add a classic industrial feel that cannot be reckoned with.

‘Almighty And Relentless’ is, dare we say it (in relation to the industrial genre at least)…terrifically original!? Well, maybe the first two minutes anyway. The beat and bassline is so complex and intuitive that the sonics on this bad-boy need to be heard just to be believed…we kid you not. However the downside to this piece, is the overused keyboard sounds that have infected every industrial outfit for the last decade. Meanwhile, ‘Dein Himmel’ is a twisted and unusual track which more sticks out than stands out. On this beast, Ubergirl is up front blasting out rough German over a solid but slow beat pattern which never really gets to the point.

To take us back to the finer points of the album we have ‘Insecto’ which has a really good mix of both Front 242 and early Skinny Puppy – a combination that provides an excellent dirty grind on the dancefloor. ‘Hail To The Freak’ has an excellent live feel to it but does not possess the progressive qualities of the other tracks.

Next up, ‘The Lie’ sounds like a decent Atari Teenage Riot homage thanks to the male and female vocal trade-offs. The composition of this tune particularly, is a spectacular display of power and intellect that will no doubt be the future of the genre. ‘The Black Classroom’ welds the album shut with a beat structure that could be their break into the mainstream hard house forum. This one seems as though it should have been destined for an ‘Extreme Euphoria’ or Gatecrasher compilation.

‘EXS’ is an album that houses some of the most dynamic and influential alternative electronica of 2010. The Sheffield natives have started the long-awaited push to make industrial and EBM go a step further within the alt-market and by doing so have stomped the majority of their supposed competition into mediocrity. The support act has become the headliner, UberByte are now calling the shots.