CD Review: Zico Chain – ‘The Devil In Your Heart’ 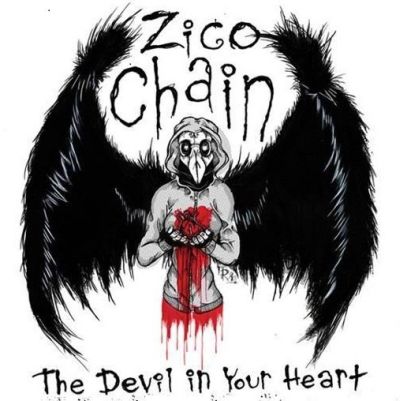 As it is, opening track ‘Evasion’ is slightly hit and miss; the chorus sounding like radio rock legends 3 Doors Down about ten years back (which we like) but the verses being screeched in a much heavier manner creates a confusing mix, overall.

This second full album, from a group once described by Slash as his “favourite new band”, is a mixed bag of harder thrashy guitars and much softer, radio friendly sing-along choruses. We’ll say for those who haven’t heard of them, a bit of a mixture between System Of A Down and a mid 90’s Jimmy Eat World. Meanwhile, ‘New Romantic’ is much more the latter and has an intense and infectious nature, being by far the catchiest song on the album. We have found ourselves humming it a couple of times this week, so they are doing something right! Some sterling guitar work elevates a pretty strong chorus to become what might be the band’s breakthrough moment this time around.

Our only major problem with this album, is that it seems to be over-reliant on Chris Glithero’s screeching vocal, when he is at his best working on radio-friendly choruses. ‘Mercury Gift’ is a perfect example of this. Zico Chain just like in 2007, still a remind us of more of the American bands we were listening to ten years ago, which is no real criticism. The real surprise after nine tracks is ‘More Than Life’, the first half of which is much slower (almost “beautiful”) and then when it kicks up a gear for the chorus, the faster change of pace actually suits the track.

Aforementioned tunes like ‘New Romantic’, as well as ‘Black Turns White’ are exciting and innovative; these songs recall the glory of ‘Where Would You Rather Be?’ and ‘Anaemia’, while others including ‘I Am The Silence’ bring the Chain’s anthemic rock to a new level of cool. Not bad boys, nice to have you back.