Eureka Machines are a local Leeds band whose pop-punk-rock sounds have been impressing audiences since 2007. The silly-named (but highly-skilled) members include Chris Catalyst (lead vocals and guitar), Davros (guitar and backing vocals), Pete Human (bass and backing vocals), and Wayne Insane (drums). Having had lots of experience being other bands, most notably Chris Catalyst is also a member of Sisters Of Mercy, and their hardworking, self-deprecating attitude, Eureka Machines humbly offer up their newest album, ‘Champion The Underdog’, to the world, or at least those who want to listen. Will it deliver? 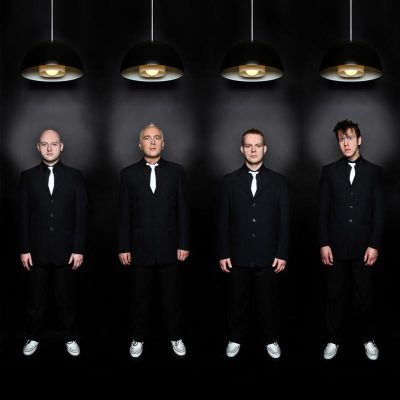 This album gets off to a strong start with ‘Champion The Underdog’ where we hear the postmodernism which seems to run throughout. There is even a naughty-but-nice nod to the Ramones, which cannot do anything but bring a smile to your face. The defiant guitar will hook you in and set you bopping for the rest of the album. ‘(I’m) Wasting Time (Yet Again)’ starts with an intro that is very Blink 182 in nature, again highlighting the postmodernism, and the idea that, while there is nothing totally new and groundbreaking on offer here, this band, without question possess the most “fun” rock ‘n’ roll sound (and best dress-sense) in all of Yorkshire’s rock scene.

‘Professional Crastinator’ and ‘Godot’s Arrived’ are both well executed, but our highlights of the album are ‘Beginning Of The End Of The World’ and ‘A Ballad to Finish’. ‘Beginning…’ is an anthemic dose of pop with a solid bass line, creating a delightfully varied song that you cannot help but shake your punk-lovin’ bottom to. ‘A Ballad To Finish’ meanwhile, is a tongue-in-cheek song that pokes fun at the traditional slow love story at the end of an album; it will leave you with a massive grin on your face and maybe even an overwhelming desire to don a black suit and some white creepers…no? Just us then. In short, this album does exactly what the band says – while it’s not going to propel the group to stadiums (quite yet, anyway…), but it will put a smile on your face and make you believe (in the same way that Queen did years ago) that real rock music is all about self-expression, passion, quality musicianship, having a good fudging time and not about trying to sound like everything and everyone else. Good effort.