And so we come to the end of this particular YA dystopian series with the second part of of ‘Mockingjay’, a film that adheres to the same formula as all the other two-part finales, namely in that the first part serves to build up the action set-pieces that dominate this final film. Director Francis Lawrence’s run on the series has run from ‘Catching Fire’ through to here, and his pallet has been noticeably darker since then as he shows a Panem beset by war and swathed in rubble. 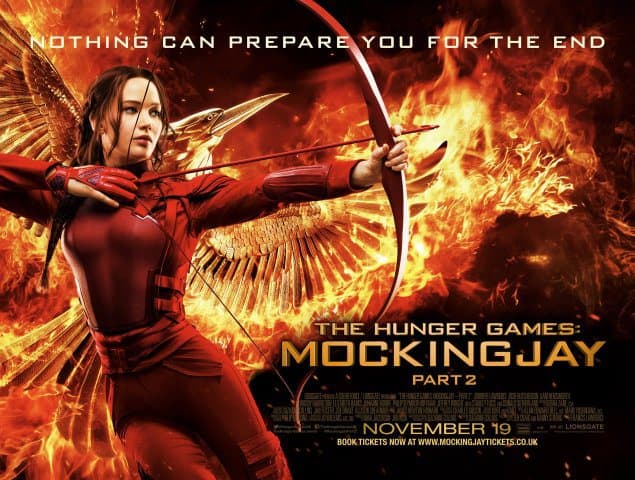 The film’s strengths lie in its willingness to embrace the darkness of the situation, from political subterfuge to the uneasiness and distrust that’s embedded in to everyone involved, no matter which side they’re on. It’s a well portrayed warzone, and the film’s best sequences delve in to the heart of the issue. We get ruminations on the nature of war, the murky nature of ‘good’ vs ‘bad’, the rebels being forced to question what exactly it is they’re fighting for.

Performances are solid all round, Jennifer Lawrence remains an engaging lead as Katniss, who by this point is far more weary than she’s ever been, though still resolved to defeat Coriolanus Snow, the despotic leader of Panem expertly played by Donald Sutherland, who by now just finds proceedings amusing, while still retaining his menacing edge. Josh Hutcherson maintains his performance level as Peeta, now beset by the after-effects of torture in the Capitol, with a more interesting role to play. Liam Hemsworth’s Gale still feels superficial, a pawn in a pointless love triangle who isn’t built on adequately to be interesting, something that’s not really Hemsworth’s fault, as he still puts in a strong physical performance, coming in to his own wherever there are action sequences.

Ultimately the final episode in this saga isn’t quite as good as it could have been because it’s not quite sure what it wants to be. We have sequences where we think we’re doing some post-Hunger Games arena-esque stuff, but we soon and rather abruptly move on from that and in to an attempt to infiltrate the Capitol, flitting between large exposition sequences. It’s a shame because the film definitely carries the emotional heft to make it all more meaningful, and it does leave you thinking afterwards, but overall it falls a little flat to be anything more than a passably enjoyable experience, like much of the series.