After a successful debut year in 2012, Beacons Festival once again brought a stylish and varied selection of bands and DJs to the Yorkshire Dales. But improvements have been made since last year’s festival, with special mention having to go to the food – the organisers teamed up with the likes of Red’s True BBQ, Diamond Dogs, Fish& and Patty Smith’s Burgers to offer cooking that was far better quality than you’d typically expect at a festival. With good food guaranteed, all that was left to do is figure out which of the festivals myriad artists lived up to their ‘so-hot-right-now’ hype or ‘next-big-thing’ status – so let us be your guide… 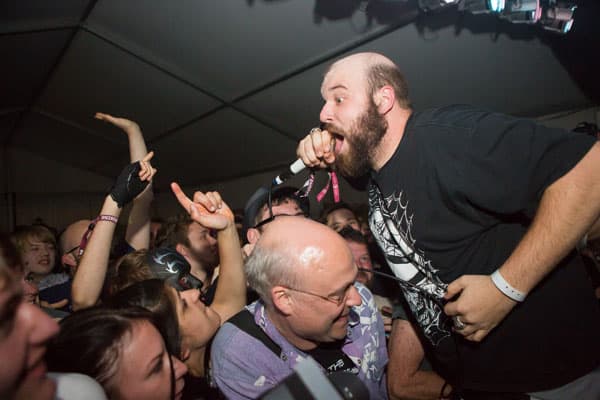 A relatively late arrival to the site means that unfortunately we miss the first half of Friday’s proceedings, so our opening band for the weekend ends up being Esben And The Witch. They’re definitely a good way to start things off though, as the band’s second album ‘Wash The Sins Not Only The Face’ saw them adopt a more lush, textured sound – epitomised by ‘Deathwaltz’, a song blessed with a shimmering, eerie beauty.

Next up, Only Real proves to be a disappointment, simply coming across like a less charming Jamie T. Dan Croll’s summery vibes and Vondelpark’s blissful Balearic tracks mark an improvement, but it’s down to Eagulls to provide us with the meaty offering we really crave. Impassioned vocals, punchy percussion and a whole heap of guitar fuzz make tracks like ‘Moulting’ a pleasure to hear.

On the main stage, Ghostpoet makes a welcome return following his performance at last year’s festival – while he might seem like an unlikely party-starter given the often melancholy nature of his lyrics, he seems to have taken to the role remarkably well. “I was here last year and it was great. This year is greater!” he shouts, to a roar of approval from the crowd. The day’s most welcome surprise comes from Traams, who play shortly after in the You Need To Hear This tent  – their mix of ramshackle grunge stylings and motorik Krautrock grooves proves to be a effortlessly engaging prospect.

After that, it’s time for a masterclass in live performance from Fucked Up (pictured). Now, Fucked Up are a hardcore punk band, but they’re not just any hardcore punk band – they’re hard-hitting but still uplifting, and angry without being self-righteous. Frontman Damien ‘Pink Eyes’ Abraham spends most of the gig in the front row, shirtless, engaging directly with his fans – leaping about, catching crowdsurfers, donning a red wig passed to him by an audience member, making motivational speeches and generally doing his utmost to reduce any barrier between himself and the crowd to utter meaninglessness. It’s impossible not to be caught up in his boundless energy – even if you’re not a fan of the genre, we’d absolutely recommend that you see this band live.

After that, we’re fortunate to be able to catch half an hour of Bonobo’s effortless fusion of different electronic styles, from house to dubstep – at one point he even plays a track that sounds a bit like Massive attack gone garage. It’s a wonderfully slick way to round off the opening day of the festival.

Saturday’s stage times are arranged in such a way that it’s possible to catch almost every band that’s playing in the first few hours, if you’re so inclined – and that’s pretty much what we aim to do. The only real obstacle is the day’s miserable weather, but thankfully the walk between stages is short enough for us to risk travelling back and forth, and the fact that the majority of the action is happening under cover proves to be a huge blessing.

Main stage opening act Royal Blood start out promisingly enough, but their two-piece rock sound seems to run out of ideas fairly quickly, while Amateur Best comes across like a man singing over the music from Sonic The Hedgehog – an idea that sounds more appealing in theory than it turns out to be in practice. It’s left to SBTRKT to provide us with our first really strong showing of the day – their propulsive female-fronted indie rock has more than enough bite to keep us hooked.

Unfortunately after that, we’re back into a period with more misses than hits. While I’m not a huge fan of East India Youth’s vocals, he at least has some interesting Fuck Buttons-esque sonics going on at times – by contrast, the empty indie sounds made by Spectrals lack any sort of power to engage us at all. Thankfully, Bill Ryder-Jones is somewhat of a revelation, his quiet, melancholy songs proving to be a beautiful and enchanting proposition.

Stealing Sheep appear to be winning the competition to see how many of their mates they can get into the festival as performers, with the Liverpool trio opening their set accompanied by a 10-piece ensemble of brass, percussion and woodwind. They’re at their best when they strip things back, however, allowing their beautiful three-part harmonies to really shine – they make a strong case for being the UK’s answer to Warpaint, but with folkier sensibilities.

The much-heralded Temples would like to place themselves at the forefront of a neo-psych revival, but to our ears there’s also a hell of a lot of Kasabian in their sound – ‘Ankh’ wouldn’t have sounded out of place on ‘West Ryder Pauper Lunatic Asylum’, while ‘Keep In The Dark’ has a definite air of ‘Shoot The Runner’ about it. That’s not necessarily a bad thing though – it shows they have an ear for a hook amongst all the trippy instrumentation.

Our next artist raises an issue that proves to be a persistent problem throughout the weekend. “I really like that techno music over there, it’s really cool,” quips Melody Prochet – otherwise known as Melody’s Echo Chamber – in a sarcastic reference to the noise bleed from the nearby Red Bull Music Academy stage. Thankfully, it’s only really noticeable in between songs, and does no harm to her dreamy psychedelic sound – the sprawling freakout of ‘Crystallised’ in particular brings a huge smile to our faces.

We then head over to The Space Between’ area to check out Micky P Kerr, who definitely has an air of John Cooper Clarke about him thanks to his observational style and razor-sharp wit. Anyone hoping for a nice, clean, PC comic should probably turn away – his rants about bin men and stupid driving instructors are hilarious, and even the greenest festival-goer can probably relate to his extensive list of ways to “have a sh** time at a festival.” His set ends with a song about a sexual encounter in a cinema called ‘Blown To Oblivion’, which has Kerr forming the assembled audience into an impromptu choir of sorts – a highly amusing end to an brilliantly unpredictable set.

A quick visit to see London-based four-piece Childhood serves only to prove that the ‘B-town’ movement has long since made it past the borders of Birmingham. Whether or not that’s a good thing is entirely a matter of taste – but let’s just say we decide to plump for the hypnotic electronic sounds of Gold Panda instead. He has the tent in a mesmeric trance, but later sends the crowd wild by dropping the infectious groove of ‘You’. Mikal Cronin also impresses with a set of effortless, breezy garage-rock songs – ‘Change’ being a particularly great example.

Tonight’s main stage headliners are Local Natives, and despite having seen them play some impressive support slots, we’re unsure whether they’ll be able to hold our attention for the full duration of their headline performance. Happily, they prove to be more than capable of doing so, playing a set full of wonderful moments to keep us hooked from start to finish. The gorgeous, widescreen soundscape of ‘Breakers’, the blissful ‘You & I’, the heart-wrenching ‘Columbia’, the spine-tingling harmonies of ‘Heavy Feet’, and the Arcade Fire-esque anthemics of ‘Who Knows Who Cares’ are just some of the highlights of a brilliantly-executed set. The band end their set with a raw, powerful version of ‘Sun Hands’, but gratefully return for an encore, thanking the Beacons crowd for making them so welcome.

There’s just enough time after that to catch a little bit of Wire, whose post-punk sound is still as urgent and vital as ever. It’s refreshing to know that, no matter which of tonight’s headliners you chose, you’d be witnessing a band giving nothing less than 100%.

After learning that Department M have sadly had to pull out of their slot due to injury, it falls to fellow Leeds residents Sky Larkin to open proceedings for us. The band are in that awkward pre-album-release stage where they’ve got plenty of new material to show off, but no-one’s had the chance to digest it outside of a live setting. On this evidence, however, we fully expect that we’ll come to love new tracks such as ‘Loom’ and ‘Motto’ as much as we do old indie-pop favourites ‘Still Windmills’ and ‘Fossil, I’.

The Beacons program describes Wolf People as “delicate”, but that’s not really the right word for their intricate, muscular psych-folk sound. Continuing the wolf theme, Lone Wolf demonstrates his excellent songwriting credentials, with songs from his latest album ‘The Lovers’ bringing to mind the sensibilities of Talk Talk or Wild Beasts. Highlights include a beautiful rendition of ‘The Swan Of Meander’ and some amazing falsetto work on ‘Good Life’, before Paul Marshall and his band close the set with old favourite ‘Keep Your Eyes On The Road’ – the intricate guitar work on this track is a joy to behold.

After that we’re treated to a psych-rock double-bill on the main stage, with both bands taking a differing approach to the genre. Mikal Cronin offer up a compelling spectacle of blistering noise and barely-controlled chaos, while Moon Duo build on that old chestnut of “repetition, repetition, repetition,” laying down the kind of infectious grooves that are easy to get lost in. After that we catch Leeds’ latest don’t-call-them-a-supergroup Menace Beach (featuring members of Hookworms, Sky Larkin and Department M among others) – they play a short but sweet set that leaves us wanting more of their sub-three-minute nuggets of poppy surf-punk.

SBTRKT has drawn a big crowd for his DJ set over on the main stage, and he sure knows how to keep them dancing with his pulsating electronica – such are the levels of euphoria created that there’s even a spot of ‘chair-surfing’ going on. We could happily dance for another hour, but we’ve got one last band that we absolutely must see on the You Need To Hear This stage – which incidentally has provided many of the weekend’s most satisfying performances, no doubt due to its more intimate nature.

We were worried that Savages might have to put in a truncated performance given their allocated stage time, but by starting ahead of schedule (and finishing a little late) they have time to run though almost every song you might reasonably expect them to play. The band really have got their tension-and-release style of post-punk down to an art form at this point – the early paring of ‘I Am Here’ and ‘City’s Full’ whips the crowd up nicely, but predictably it’s ‘Husbands’ that causes the biggest frenzy towards the end of the band’s set. Other highlights include a deranged, sexually charged extended version of ‘Hit Me’, and the sweeping adrenaline rush of ‘She Will’ – dedicated by Jehnny Beth to “all the ladies out there.” The band may have no shortage of detractors, but the packed-out tent shows that there are plenty of those who love them in equal measure – we’d definitely count ourselves among them, and tonight’s exhilarating performance has done nothing to dissuade us.

For those who still have any energy left after that, there’s the quirky indie of Django Django or the Sabbath-esque stylings of Uncle Acid & The Deadbeats to round out the night with, but to be honest, we’re spent. Thanks Beacons, it’s been pretty damn good fun.