Rockin’ the Blues 2019 – The only UK pitstop on this European Tour with 3 exponents of the genre, the fresh rock feel of Kris Barras, a grandmaster in Walter Trout and the still looking young but with over 20 years’ experience that is Jonny Lang.

Occasionally at Soundsphere Magazine we will venture out from the safety of the North and visit that big city down South. However, it has to be for a very special reason and tonight a touring group of top bluesmen is precisely why we find ourselves at the Forum in Kentish Town on a Tuesday night. Particularly Jonny Lang who I have personally wanted to see play live for about 20 years, whatever the reason, I missed out, most probably because his visits to the North of the UK have been few and far between, and he did deviate off down soft pop rock avenue, considerably away from my favoured dirty blues main street.

Tonight, is the finale and the only UK date on this short European Tour of ‘Rockin’ the Blues’ and it’s in 3 or 4 parts. First off Kris Barras, then the legendary Walter Trout and finally Jonny Lang, with all 3 then getting together for a jam session as the encore, strap yourselves in for this is a night of pure blues magic.

It’s an early start to get as much crammed in to the night and local boy Kris Barras is up first at 7:30pm, the former MMA fighter cuts an imposing figure heavily tattooed but more importantly this hungry look in his eyes and an attitude to heat things up a little with a more hard rock approach to his guitar playing.

There are quite a number of Barras shirts being worn tonight, so it isn’t surprising that they give him the best reception on the whole tour. “I couldn’t get the Germans to sing” he jokes, but there’s no problem here when ‘Hail Mary’ is belted out. A sensitive side of a fighter shown when he dedicates ‘Watching Over Me’ to his late father who sadly passed away having been his main supporter, and it always takes a brave man to cover Zeppelin and he does it with style as ‘Rock’n’Roll’ had an early crowd here yelling for more. Then the more boogie orientated ‘Wrong Place, Wrong Time’ had everyone clapping – watch out Ramblin’ Man Fair you need to catch his set. Kris Barras has gone up a few notches on the blues league (if there is such a thing) and shown that his no-nonsense approach is winning fans all over, with a new album and tour coming later this year, as well as his Ramblin’ Man appearance, expect him to return in the Autumn all fired up for more.

What more can you say about Walter Trout? in a similar way to UK’s own Wilko Johnson, we expected to be hearing sad news of his death a few years ago, however, one lastminute lifesaving liver transplant operation later, and after working for years to rebuild his strength, and learning the guitar again from scratch, he is back on stage here with an album called ‘Survivor Blues’ – a story that should really be a film script somewhere. He is greeted with such warmth and just stands there with open arms before pulling on the guitar and blowing the cobwebs from the far reaches of the forum with an instantly recognisable blues riff and solo “Hello London” he pauses, and then the band kick in with Jimmy Dawkins’s ‘Me, My Guitar & The Blues’.

Whilst his vocals were full of vim and vigour, he delivered more blues music passion in 10 minutes than Clapton will have done all night across at the Royal Albert Hall. Tonight, we feel the master at work and he’s happy to share in his new found health, after ‘Almost Gone’ encouraging everyone to be a donor to save someone’s life. He’s also giving to older penniless blues players too by covering ‘Red Sun’ as a single “You may have heard it on Planet Rock” and ensuring that the writer Floyd Lee finally gets some money coming his way. Telling these great stories in-between the music, from ‘six fingered’ Hound Dog Taylor’s ‘Sadie’ to some Rory Gallagher and ‘Bullfrog Blues’, this was a short set of magnificent proportions, a great taster for his Autumn UK Tour, where you will get the full show.

Finally, the fabulous gurning and lithe spirit that is Jonny Lang appeared stage right. Still looking fresh faced despite his extensive career that started when he was just a teenager. Much has gone on in the 20+ years and we all thought he had decided that pure blues wasn’t for him, as he went off and created some slightly pap sounding commercial stuff.

However, he has returned with a great album called ‘Signs’ and played a good chunk of it tonight. ‘Snakes’ was a storming spitting tune and backed by some sterling guitar work. You see Jonny Lang is also a bluesman, even if he does look like he’s skipped the last Maths period in college to be here. He can play, twist and contort his face into dimensions that can only be understood by a guitar player, he is almost playing guitar by facial expression and sweat alone.

The set was painfully short and made me wish that he would play the UK more often – sadly he doesn’t, and we’ll be lucky to see him again in the next 5 years. ‘Lie to Me’ – the first track I ever heard of his, brought the 3rd set to a close and we waited for Barras and Trout to rejoin Lang on stage for a jam session finale.

They stood on stage and the solos were traded equally by all 3, back and forth we went until ‘Goin’ Down’ became no more. Even former Sleeze Beez Dutch vocalist Andrew Elt came on to showcase some pretty meaty vox, while the 3 watched on. If only they could have done another hour or so on stage as a trio, busted out maybe some more Zep, that would have been unmissable. As it was, the few hours spent in their company separately was enough to satisfy this classic blues hungry crowd.

Here’s to the next ‘Rockin’ the Blues’ tour – who do you think should be included in the next trio? 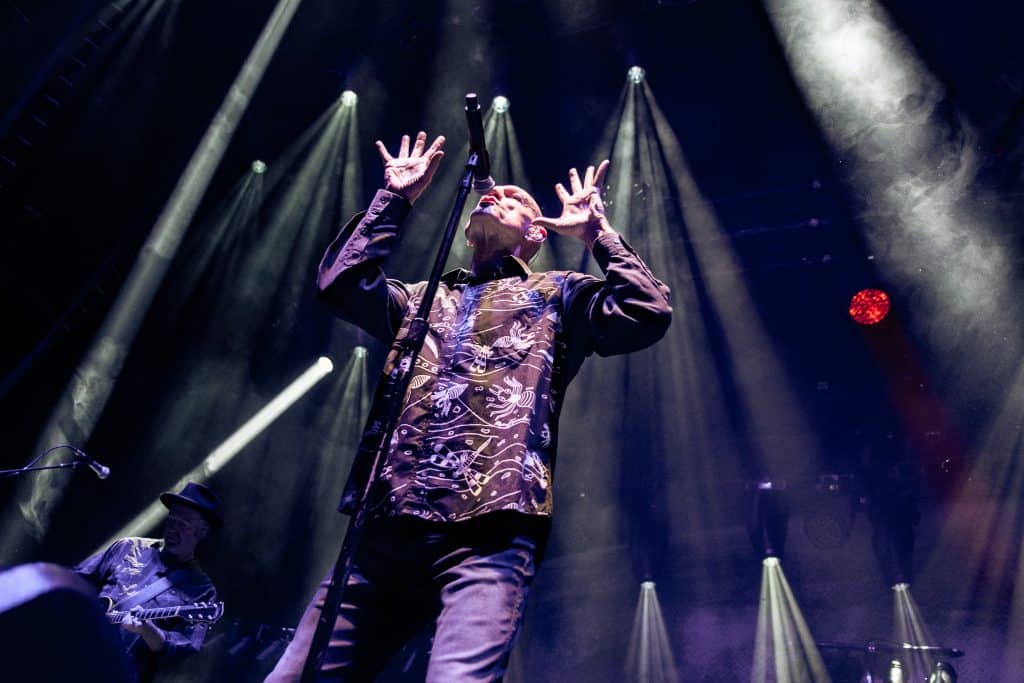