In our latest band spotlight, we chat to Peter Dreimanis of July Talk in advance of their trip to our home city of York on May 26. 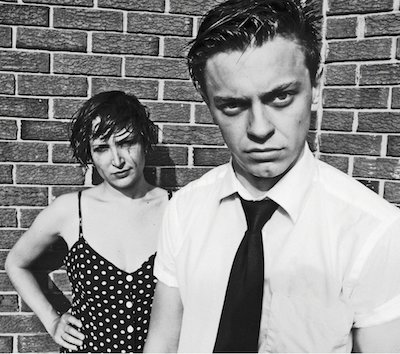 P] “Good! On a train back to Toronto towards a rehearsal tonight. We leave for tour on Wednesday so we’re all really excited.”

S] What are you most looking forward to about the UK and Euro dates you have coming up?

P] I just can’t wait to bring our music somewhere new. We’ve all played in a few bands before July Talk, some of which have toured in UK/Europe, but I’ve never been part of a project that has represented me so accurately. So, after touring so much in Canada, we’re eager to go abroad. Our live show is where we’re most comfortable so it feels good having that be our first impression on a new audience.

S] Are you looking forward to visiting anywhere in the UK particularly while you are over?

P] “We get to play The Isle of Wight! We’ve looked up to a lot of artists that have played there. I also love Brixton and have had some amazing times at The Windmill. I haven’t spent close to enough time in London to figure it out. It feels like the entire world has been put into one city. I’m hoping that over the next few UK tours I’ll be able to get a better sense of such a colossal city.”

S] What keeps you guys passionate about creating?

P] “I think we are at the mercy of something quite specific in our band. We thrive on a certain state of mind. We need to feel like we’re changing the world every time we play. We don’t discuss it, but there needs to be a manic desperate energy in the air before we do anything. The only bad shows we’ve ever played have been a product of a lack of that energy. When we are in the creation process, be it in the studio or writing a song together at our rehearsal space, we look up to artists that are able to harness that ideal. We understand that there are millions of artists out there and we’re not reinventing the wheel. But, to feel fully passionate and inspired about creating an idea, we put blinders on to all of that. We avoid influence as much as possible and focus on what makes us feel the most unique. Only at that point to we feel that we are doing something important.”

S] How do you look back at the success of tracks like ‘Guns+Ammunition’?

P] “It’s a crazy feeling having people connect to one of our songs to that level. The song clicked very quickly when we first wrote it. It was one of those lucky moments where a song comes together in a few minutes. The success of the song and video allows us to arrive in a city and have people have a pre-existing idea of what we’re about. It’s really helpful. It is definitely not about guns or ammunition, which I like to be clear about because we’ve had some weird attention from pro-firearms types. Apparently they didn’t pick up on the metaphor, surprise surprise.”

P] “We had a great time at SXSW in Austin, TX this last spring. We played eight shows in three days, which is apparently pretty normal for that festival, but I think it really benefited our energy. Like I said before, our show thrives on a feeling of urgency. We’ve been able to play with and meet a lot of our heroes. Most of all, the feeling of getting in the van after a great show sticks out. We’re all hyper critical of ourselves, so when we can all sit down and agree that the show was the best it could have been, there’s no feeling like it. Looking back, that’s what comes to mind.”

S] What are you most excited for this year in terms of plans after summer?

P] “I’m looking forward to seeing how our show changes with all of the festivals we’re playing. It’s very different to play to 500 people and 10000 people. I’m excited to see how we adapt. When a band can really capture a festival audience, it’s an incredible experience. We’re playing huge festivals all summer, so this is our opportunity. How can we bring something new to July Talk show on that scale? How can we push the huge audiences out of their comfort zones? Let’s see what happens.” 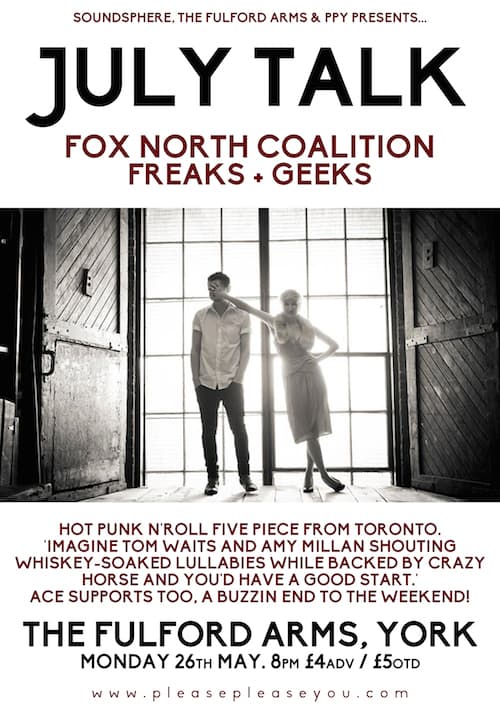