We’ve got another one for you! Oh yes! It’s an awesome one too. Check out our interview with Benjamin Carpenter and Skylar Champion of Californian dubstep-crossover act The Future In 1989. 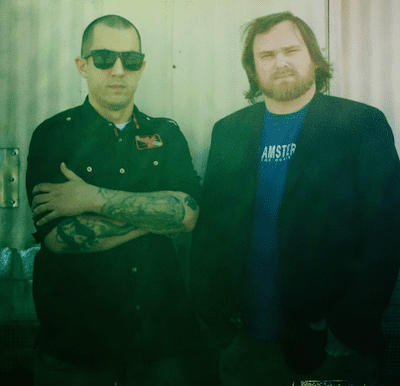 BC] “First and foremost, our sound has been influenced by my father, Wayne Carpenter. He was a staff songwriter in the 70s for Warner/Chappell and really exposed me to a diverse array of artists and taught me what to listen for. I mean, how many kids can say that their father introduced them to Nine Inch Nails, 60’s soul and 70s punk? He used to wake my brother and I up on Saturday mornings to watch Yo! MTV Raps because he felt it was important to have a well-rounded musical base and not just be limited to what was playing on the radio. Beyond that, artists like Aphex Twin, Patti Smith, early Detroit House pioneers Derrick May and Juan Atkins, composer John Cage and a lot of the madness that was Factory Records. Caspa, however, opened our eyes to dubstep.”

BC] “I think that we both have always had this obsession with Science Fiction and past concepts of what life would be like in the future. It has played a huge role in The Future In 1989 conceptually speaking. The novels of Philip K. Dick have always inspired our songs thematically.”

SC] “More personally, we both grew up in families of divorce and experienced a lot of sh** that put a chip on our shoulders from an early age, like we always had something to prove.”

SC] “We just wrapped our remix of Florence + The Machine’s ‘You’ve Got The Love’ that I feel really encompasses the broad scope of our sound. It has elements of electrohouse and dubstep but executes it in a way that has a live rock and roll energy to it.”

BC] “We also just began working on a few new songs with my brother, singer-songwriter Jaymee Carpenter (former frontman of UK nu-metal group Autonomy) which have a dubstep-meets-Deftones vibe to them, which is a sound we’ve developed and are really excited about right now.”

BC] “We’ve gotten a lot of love via social media from the London and Manchester areas which is a huge honour to us. Because of that, we’re now working on putting together a string of shows in the UK aimed for next summer.”

BC] “I think you’d be surprised to find that the TFI89 live experience feels more like an arena rock show than a dance venue. We’ve both been to hundreds of shows over the years as fans and know that a natural skepticism exists when seeing a band you’ve never heard before. Our aim is to destroy that skepticism from the beginning of the set and make you fans by the end of it.”

SC] “Our energy is relentless and we don’t let up. Our set is packed with haunting melodies and sweeping transitions, all the while keeping you dancing and waiting for the drop.”

SC] “I think the biggest challenge for us as EDM artists right now is the trick of reaching a worldwide audience. How do you play to fans in America and the UK while also appealing to fans in Bahrain, Indonesia and Taiwan? Dance music has more of a global reach than any other genre today; it transcends culture and staying internationally relevant is always a challenge.”

BC] “Also, there has been this emergence of polarised views towards the dubstep phenomenon. In America, it seems like you either love it or hate it, there is very little grey area.”

SC] “Either that, or you’ve heard Skrillex a few times and are now a dubstep aficionado.”

BC] “Our first priority is to release our full length album which has been in heavy production for the past two-plus years. Because of the outrageous amount of time we’ve spent in the studio, we plan to spend a lot more of our time in 2013 playing live shows and supporting the album.”

SC] “We’ve also got a few film and television music licensing projects on the horizon which we are excited about.”

S] What keeps you passionate about mixing up genres?

SC] “We both grew up in Southern California which is truly one of the most musically rich and diverse regions of the world. Whether conscious or not, you find that spilling out into your production on a regular basis. It has been a great method for us to reach fans of other genres which wouldn’t normally be exposed to our music.”

BC] “Musical discovery has always been our main objective as artists. Sticking to one genre has never had any allure to us. I think you get pigeonholed as a band when you limit yourself to one and frankly different moods call for different genres. We want to be the band for all seasons.”

Cheers to Soundsphere for the band choice and to The Future In 1989 for giving the best interview out of all the Spotlight artists. Hope to hear more from them in the near future.

great interview! i've been following their progress over the last year and its pretty inspiring how quickly they've emerged into the spotlight. looking forward to seeing and hearing whats to come! bravo to soundsphere for the interview. lol at the skrillex remark!