An October weekend is set aside to celebrate the impact of the world’s most recognisable stringed instrument on the musical culture of York and beyond. 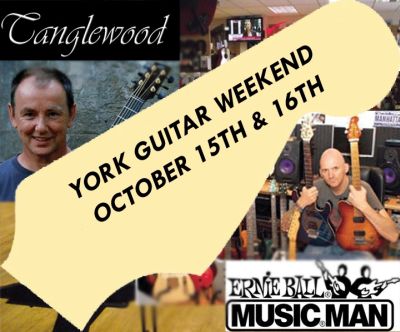 “The guitar is God’s instrument and the rest are all there to make us look better!”

The hub of the weekend’s activity is the Fossgate shop owned by the event’s organisers. Customers to MOR Music are treated to live in-store performances, model demonstrations and promotional offers on their stock.

“Nothing like this has ever happened before,” explains Lynne O’Dea of the store. “We wanted to make a big event, get some money raised for charity and get loads of people into York who are big on guitars.”

The staff at MOR Music are involved in the Guitar Weekend not just in a retail role; two employees are members of bands who are appearing at the various performance venues. Woodhouse plays guitar with Captain Zippy; while Mark Waters is bassist with The Blueprints, a band who were among the line-up commencing the weekend at a local restaurant the previous evening.

“It went fantastically well,” Waters reflects. “It was a great start to the weekend. There was lots of people there and it was a fun night.”

Other routines come from the likes of …And The Hangnails, Tom Kay and The Littlemores. Hull native Kay observes, “It’s a great weekend, it seems good to be asked to play. I hope the audience have a good time and they’ll enjoy me playing.” Among early attendees at the club, taking a break from his duties on Stonegate, is the Purpleman, who brandishes a custom-made guitar in his trademark colour and even takes to the stage with it.

Purpleman is also involved in a treasure hunt competition as part of Saturday’s proceedings. “It involves trying to find eight clues you have to follow around York to spot the guitars,” Waters adds. “The entries go into a draw to win some prizes.” Participants who upload a photograph of Purpleman to Facebook stand a chance to win a brand-new ukelele.

Back at the main base for the weekend, and their flagship performance gets under way, as Francis Dunnery and Dorie Jackson mesmerise the gathered crowd with an informal and intimate in-store set.

The former It Bites guitarist, who has also played alongside Santana, Ian Brown and Lauryn Hill, admits he doesn’t get involved in such sets due to his other commitments; “I’m too busy doing other things, like my psychology doctorate and practising astronomy… it’s not really the primary focus of my life, but I do like doing it; it’s a lot of fun.”

Without microphones and amplifiers, the sound between Dunnery, using a brand of acoustic guitar which he personally endorses, and Jackson is pure and harmonious. He reflects: “We do what we call ESP vocals, we try to log in to each other’s energies. It sounds a bit hippy, but it’s very effective. The intimacy is insane.”

Other spots for live music include three of the city’s pubs and a Mexican restaurant. The Red Lion on Walmgate offers entertainment in its beer garden on what’s turning out to be a sunny, pleasant weekend; while The Habit on Goodramgate opens its doors on Saturday evening to guitarists of all styles and abilities.

Mojito’s on Museum Street serves up a feast of live music on Friday, Saturday and Sunday; while Sunday evening brings an intimate session with folk musician Clive Carroll at The Black Swan on Peasholme Green.

Sunday also brings an exhibition by manufacturers and retailers at Fibbers. This element of the weekend caters for players and fans alike of all makes and models; electronic and acoustic, bass and ukelele, mass-market and custom-made.

Mark Linklater, a Driffield-based guitar maker, is exhibiting examples of his handiwork on one of the stalls. His design process is focused on the specification provided by his customers.

“They will decide on what materials they want me to use, and I will basically make the guitar to their requirements,” Linklater says. “Body size, neck size, shape, width – it’s a bit of an open book, you can choose what you want.”

This dedication is a selling point Linklater keenly markets to aficionados. “Instead of picking one up from the shelf, you design what you want out of the guitar,” he comments. “I never make two the same; the main point is they are all one-off, printed with serial numbers.”

The weekend of music and memorabilia is a fitting tribute to the guitar’s pivotal place in art, culture and society. Or, as local guitar tutor, John Martin, eloquently puts it, “The guitar is God’s instrument and the rest are all there to make us look better!”

The six charities benefitting from the proceeds of York Guitar Weekend are:

– SNAPPY, an organisation who provide social opportunities for young people with special needs in York

– The William Rhodes Appeal, an effort to raise funds to offer a three-year old boy from Acomb a bone marrow transplant
– York Against Cancer, a charity to provide care, education and research to support those affected by cancer in the city
– York Against Cancer, who offer inpatient, outpatient and home-help care to those affected by life-threatening illnesses
– The Blue Cross Adoption Centre in Thirsk, who offer veterinary service and adoption facilities for animals in North Yorkshire
– Yorkshire Air Ambulance, a charity who provide an emergency air rapid response service by helicopter across the Yorkshire region