This month’s lesson is a sixteen bar solo I have submitted to be part of a piece called “Discipline” by Jay Stapley (One of my ex-tutors at the ICMP), it explores the different vocabularies used by different players over the same backing track. Updates of this track are being posted on Jay’s soundcloud page: https://soundcloud.com/dammit-music/discipline-20-feb-2015 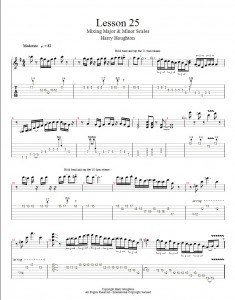 The track is in G major and I opted to do a bluesy solo mixing up some major and minor licks. We begin with a quarter tone bend at the eleventh fret bending from B flat up a quarter tone, before a short pentatonic run going down from G to F at the twelfth and tenth frets of the G string, down to the D at the twelfth fret of the D string and back up to F and then G. We then move to the B string and play G, F, G at the eighth and sixth frets,  then F and back to G but this time we perform a half-tone bend up to G#. Then we bend from A to B at the tenth fret, hold the bend and add our third finger onto the eleventh fret, raising the pitch by another semi-tone to C. We then release the bend all the way back down to G at the eighth fret. Now we move right down to the other end of the neck for a descending pentatonic lick with a couple of blues notes thrown in. It’s all in triplets and starts by hammering on and off again from the D to the F at the third and sixth frets of the B string, then pull off down D flat, C and B flat on the G string, then pull off from C to B flat again before playing the G at the fifth fret of the D string. We then use a double stop bend on the B and G strings at the third fret, bending up by a quarter tone, then playing G to F at the third and fifth frets of the D string, down to D at the fifth fret of the A string,  then back up to the F and then finally G.

We then continue with some more pentatonic phrases starting with G and F on the low E string, and B flat and C on the A string both at the first and second frets. From the C we slide up to the D at the fifth fret and play the F, G, B flat and C again an octave higher at the third and fifth frets of the D and G strings. This time though, instead of sliding up to the D we bend up to it, and back down before pulling off to the C at the third fret and finishing on the G at the fifth fret of the D string. Next we bend the A at the seventh fret up a tone to B, back down, up to B and down again before pulling off to G at the fifth fret, down to E at the seventh fret of the A string, back up to G with a quick pause before playing the A at the seventh fret above it and then back to the G. Then we pull off from A to G again then head down to the E below as before, and we then play an inverted G power chord using the D and G at the fifth frets of the A and D string. We hold this for two beats before playing a Gsus4 to G major chord using the D, G and C notes all at the fifth fret of the A, D and G strings, and then D, G and B just lowering the C note by a semi-tone down to the fourth fret on the G string.