Atreyu’s hard-hitting mix of classic rock and metalcore influences has made the band a hit with audiences over here for the last decade. As the band are currently out on tour with UK’s biggest and brightest in Bullet For My Valentine and Bring Me The Horizon, we chat with drummer Brandon Saller about touring, the band’s previous album ‘Congregation Of The Damned’ and more… 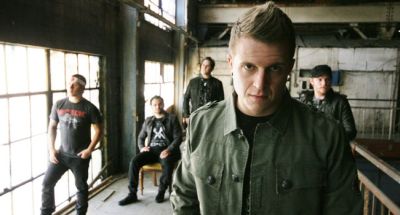 S] What are you most enjoying about this tour with Bullet For My Valentine and Bring Me The Horizon – how are you getting on?

B] It’s great so far. It was very cool for us coming on this tour because we have known Bullet For My Valentine for a very long time and done a bunch of tours with them so, it’s great to tour with friends. At the same time, we are playing packed-out arenas every night with them, so I don’t think any band can really complain about that situation. This tour has been perfect.

S] What have been some of your favourite experiences when on tour in the UK previously – you’ve done Download?

S] From ‘Congregation Of The Damned’ our standout tune is without question ‘Stop! Before It’s Too Late and we’ve destroyed it all’ – can you talk us through what you were trying to achieve with that one?

B] As far as lyrically, that song was actually one of Alex‘s [Varkatzas, vocals] ideas and I think it came from a comic book sketch. On that one, we are looking at the world as a ‘forest’ where everything is green and then, we get to New York and LA and cities like that where everything is black and horrible. It’s a song that depicts human beings as a plague on the earth, who are essentially destroying it.

S] You recently recorded a few songs for a record called ‘Covers Of The Damned’ – what track was the most fun to work on?

B] I think for us the ones that were the most fun to do were the Volbeat cover [‘Guitar Gangsters And Cadillac Blood’] and the Aerosmith one [‘Livin’ On The Edge’] as well. The Aerosmith cover was one that we worked on as just us and then the Volbeat song is a current favourite that we all like and so, for us it was great to get together and play a song that we all enjoy.

S] You worked with Architects from the UK on a couple of the tracks, how challenging was it to get everyone together for their contributions to the covers record?

B] It was a little difficult only because everyone was brought in from different parts of the world. The only bands that were close together and could get in the studio were us, and Endless Hallway – actually Brandon Bolmer from Chiodos was able to get down too, but for Sam [Carter] of Architects it was difficult to get him in so that he could do his parts. It all came together though, and people took on their own roles to get it done. It was very fun.

S] What kind of music is influencing you at the moment?

B] As far as a band that all of us are into, I would have to say Volbeat. They’ve definitely been a constant on our tour bus and on all of our iPods. We also like a band called Poison The Well and, Nick Cave And The Bad Seeds too!

S] In terms of the band, as we approach a new decade – how have your aims and goals changed and developed?

B] We have definitely changed and developed. I mean, we have had the opportunity to release records and travel to some amazing places. I think we have done more than we ever thought we would right from the start. I am really excited about the future as well. We have been a band for 11 years now, and we have been able to accomplish quite a bit and I am very proud of that.

S] What’s the band dynamic like now 11 years on?

B] Absolutely. I mean as part of this lifestyle we are travelling together every day and then we play together at night – we have really gotten to learn the ins-and-outs of one-another and find out what makes  us tick and also, we learn how to make it work and then deal with the stuff that doesn’t work when we are on tour. We have enjoyed growing up together.

S] In terms of the metal scene – you guys have a variety of influences including metalcore and classic stuff as well – can you talk to us about how you see your place in the metal scene now?

B] We’ve adapted to certain things. We haven’t really changed our sound in order to cater for what is going on around us or anything like that. We’ve always sounded exactly the way that we have wanted to. I think, as far as changes within the music industry everyone has started to adapt and we really are in a completely different world now in terms of the metal scene – it’s a completely different ‘game’ that we are in. You have to adapt otherwise artists can be severely let down.

S] What are some of the biggest challenges that you have had to face as a band?

B] I think since when we started playing in Orange County, we were always thought of as the ‘underdog’ band, but we have managed to prove, first to Orange County, then our state, country and now the world that we are definitely not that band. It’s like I said, we have gone forward and done more things than a lot of people ever thought that we would do. It’s definitely a good feeling.

S] Is there a song that you guys are working on, or that you have in the back-catalogue that you feel perfectly defines the state, or mood of the band right now?

B] I think that we certainly put across a ‘mood’ with every album, not necessarily in specific songs but in whole records and I think that with each one, there is a specific mood or attitude that comes across as a result of what the band is feeling. I think that the closest thing people can associate with our ‘mood’ right now is our last record, because it’s the most recent.

S] I think that your fans will respond well to that covers record because it demonstrates a different side to the band than what many people will be used to?

B] Exactly. That was the point. We are really having fun right now, and until we do our next record, the covers get across how we are feeling at the moment.

S] Have you begun writing for new material yet, and what’s the score if so?

S] Are you playing with any ideas at all, or is that point still a while away?

B] Yeah, that’s still a while away from now. We’ve been so heavily involved in finishing the tour cycle for ‘Congregation Of The Damned‘ that we really haven’t had time to think that far ahead yet.

S] What are you guys doing for Christmas?

B] I think that we get home on the 20th of this month and then we will all scatter and go our separate ways. I’ll be at home with my family and everyone will get together. It’s going to be really nice.

S] During your time off from Atreyu, what projects will you be working on?

B] Myself and Travis [Miguel, guitars] in-particular will be doing some music – not together. I am going to be working on my project the Black Cloud Collective in February. Marc [Mcknight, bass] will be working on his art and so, everyone’s got their own thing going on.

S] How is the inspiration different for you working on the Black Cloud Collective in contrast to Atreyu?

B] It’s completely different. This time all of the ideas are coming just from me. The style of music is different as well. It’s not really coming from a metal or a ‘heavy’ music style at all.

S] Going back to Atreyu, when you have toured these parts, you never just concentrate on the bigger cities like London and Manchester – you’ll go to other areas like Leeds and Sheffield. How important is it for you to cover all of the UK?

B] It’s very important to us. There are always going to be fans in places that are not necessarily seen as the ‘bigger cities’, and often it is those shows that turn out to be the best. It’s like that in the States as well, so we try to cover our bases and play all of the towns that we want to because a lot of times those shows are ‘nuts’!

S] In the event of a zombie outbreak, what weapon would you use to defend yourselves and why?

B] I think a sledgehammer would work.

S] What about sticking Atreyu’s music in a movie soundtrack – what film would you choose?