It’s rare that you find a band that continue to break expectations and expand their sound with every album. Calva Louise, which is made of Jess Eastwood (vocals), Ben Parker (drums) and Alizon Taho (bass) have joined the special set of bands that have achieved this and continue to do so with their new album ‘Euphoric’. Dom Smith sat down (virtually) to chat to the band about taking control of their sound and creative vision on this new project. 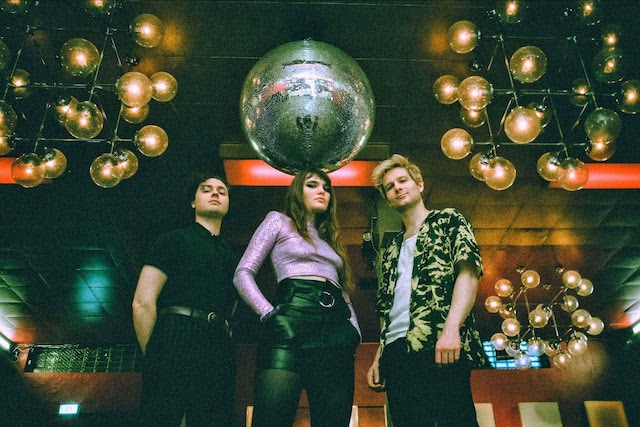 Now that ‘Euphoric’ is out there in the world, how do the band feel about the project? With the perspective of it after all of their hard work. Lead singer Jess explained that, “It felt really gratifying because it’s a 100% DIY homemade record, and everything along with it like videos and stuff; I feel like we were very lucky to have the label that was like, ‘oh you wanna do it on your own? Here’s the money.’” This is a big theme throughout the interview, with the band keen to emphasise how the record was made by them from scratch, and no professionals in a recording studio, and as Jess keenly points out that “Money doesn’t equal the knowledge.”

Since 2016 Calva Louise have been ripping up the rule book of what you consider a rock band to be. Their sound is influenced by shades of Latin rock, along with American and British bands that people hold dear to their hearts to create a sound that is distinctly their own. Made up of Jess, Alizon, and Ben, the trio formed in Manchester in 2016. They first met after friends Jess and Alizon moved to the UK, they then played a show with Ben’s former band, and the rest is history. After being supported by the cream of the radio crop with names like Jack Saunders, Huw Stephens, Annie Mac, Steve Lamacq , and so many more singing the praises of the Manchester three-piece. With their talent being recognised across the airwaves and in crowded venues, the band have returned to action with their new album ‘Euphoric,’ which is accompanied by a tie in film. They have recently just headlined the BBC Introducing stage at Reading and Leeds, cementing them as rising stars with plenty of talent to spare.

With the industry becoming increasingly concerned with streams, sales and social media likes- bands have increasingly found themselves having to become involved with running a band like a business. Not in a cynical way, though. In the case of Calva Louise, who do the majority of production and even design, management and the visuals themselves. “Even though you have people that can take care of things for you, which is great, but whatever your situation, you still need to understand what is going on,” says Alizon.

Success is another topic the band tackled in the interview. With Jess saying that “to me, success is just about being happy and enjoying what you do.” Ben had similar thoughts, “It’s happiness – if it brings you joy, I think that’s a box ticked, and achieving goals as well.” The band believe that the experiences they have gone through are success in itself, and it’s the little things that count. Alizon explained this the best by saying, “I feel like the moment where you keep going through experiences, and new experiences and enjoying it – that’s being successful.”

As the interview winds to its inevitable conclusion, Dom asks the band what their message to the fans (old and new) would be. Picking up from the previous topic of success, Jess says that “We’re here to enjoy the ride, (and) it doesn’t matter where you go but just enjoy the ride.” Ben also gives a touching tribute to the fans that have supported Calva Louise along the way, saying, “thanks to the people that are supporting us, we can’t thank them enough.”

Calva Louise’s new album is streaming now on all platforms and available on vinyl and cd. You can also watch the new film created by Jess from Calva Louise on YouTube now.