Lahannya have been at the forefront of the UK goth and industrial scene for many years now. Beginning as a solo project and progressing into a full band, the concept is ever-evolving and progressing and since 2006 the band have been impressing crowds throughout Europe having built a solid reputation for creating hard-hitting electro-tinged rock music. We speak to the group’s founder and vocalist about new music and plans for the future. 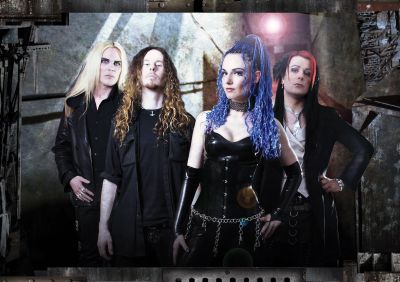 S] What fuels your passion for industrial rock as a style?

L] Actually, I’m passionate about music in general and like different genres, not just one style. I’m not even sure that industrial rock really describes what we are doing although I have to admit I cannot find a better label for it. I love fusing elements from different genres together rather than just letting myself be confined by narrowly defined boundaries – which is probably why it’s not straightforward to categorise our music. My favourite artists come from quite a variety of styles including various subgenres of metal, rock, alternative, electro, industrial, power electronics and Celtic folk – so it’s only natural that this influences my songwriting.

S] Can you tell us how your remit and goals as a musician have changed since you first began your career?

L] When I first started making music it was just about the songwriting: turning an initial idea into a full song, a few words into meaningful lyrics and giving the whole piece a structure. I was working pretty much alone, just with an old 4-track recorder. When Zenflesh Records wanted to release a song of mine on one of their compilations, the game started to change and it then became more about the recording – finding a recording studio, the right engineer and musicians to play the instruments I couldn’t play myself.

Once that was done I went through a whole other learning curve starting my own label as my first CD was far too eclectic for any commercial label to want to take it on. Early on, it was almost completely about doing this for myself, it was something I just had to do. Now it’s much bigger and there are many more people involved, of course your ambitions grow every time you take a step forward. At the moment I’m working towards the goal of being able to play extended club tours throughout Europe and knowing that wherever we go we play to a full-house.

S] You began Lahannya long after you career first took off, what do you enjoy most about working with this band in contrast to your work beforehand?

L] Well, even though we’ve been performing as a band only since 2006, this has been my aim right from the start – it just wasn’t meant to happen earlier. It was really important for me to find the right people because being in a band together is a bit like a four-way marriage: You get to share some amazing highlights together, but you also get to closely experience eachother’s bad habits and evil moods. It’s been a privilege to have been able to play our music to fans across Europe and to share this amazing experience with a great bunch of guys, what more could I ask for?

S] Can you remember where you were when you first came up with the concept for the ‘Welcome To The Underground’ EP and how those ideas developed over time?

L] Absolutely. A few years ago I had to get a new passport at about the same time that the introduction of biometric passports and the controversial ID card scheme in the UK were in all the papers. Even though I don’t have anything to hide, it’s something I am totally opposed to as I don’t want any organisation to hold extensive information about my person. I’m not so much afraid of identity theft or fraud, but simply want my privacy protected. The way I choose to live myself is likely to be considered unusual by the majority of people and I therefore want to be able to decide for myself who I tell about it and who not.

Unfortunately, in London it’s already hard to stay anonymous – we’ve got CCTV cameras at every corner and unless we’re prepared to pay three times as much, we have to use an electronic travelcard on public transport that keeps a record of all our movements. At the moment our privacy is still somewhat protected by the fact that not all the systems holding information about us are linked together, but it will only be a few years until that happens. And once it does, we will feel the repercussions of this in every aspect of our lives: our shopping habits may influence the cost of our health insurance, a high adrenaline sport may disqualify our job application and the friends we keep may get us strip searched at the airport. Make no mistake – if we don’t fit the government’s idea of the perfect citizen we will be affected. All I did with ‘Welcome To The Underground’ and ‘Defiance’ is imagine our world a few years into the future, after it has become a total surveillance society, and what our lives would be like if did not play by the rules.

S] What about the latest album ‘Defiance’ how does that expand on the themes and ideas on the EP?

L] ‘Defiance’ really picks up where ‘Welcome To The Underground’ left off. It delves further into the individual stories of those who turned their back on the newly emerged surveillance society and tells of their struggle to come to terms with a completely different way of life.

S] Random question, if you could pick anyone (friend, celebrity or anybody) to listen to your latest album with while having a chill-out, who would you pick and why?

L] It would have to be Lutz, our bass player and producer. Both of us spent an enormous amount of time on this album – from writing the songs, to recording, arranging, re-writing parts, mixing, doing the artwork, promoting – now that we’ve had a bit of distance to it, it feels really good to listen to the songs again, but this time without any purpose and without having to. I’m very proud of what we’ve achieved and Lutz is the only person who can truly appreciate how much it took to get it to this point.

S] There’s a particularly personal track on the album called ‘Sick And Tired’ – where did you draw the inspiration for that one from?

L] ‘Sick and Tired’ is about the bittersweet memories that linger when a really special relationship does not work out because life is not a fairytale and sometimes you have to take difficult decisions.

S] You played Leeds recently, can you tell us how you enjoyed that and if you notice any differences between the north and south in terms of response?

L] I always love playing Leeds because we got some great fans there who religiously come to every show we play in the area. Plus this time we had a fantastic line-up and I loved seeing the other bands perform live. We definitely notice regional differences while touring up and down the country, but I’ve never really noticed a proper north-south difference. The Cambridge audience, for instance, was going just as wild – if not wilder – as the Glaswegians a couple of days earlier on our last tour.

S] What plans are you most excited about for next year?

L] I have to admit, we haven’t made any concrete plans for 2010 yet, but as we won’t be doing another extended tour before the autumn I’m looking forward to filling my spring and summer schedule with lots of festival appearances and to getting started on new material.

S] You keep very active online with UK tour updates and things of that nature – some might say that’s unusual for a dark alternative band – where does the inspiration to do that come from?

L] I’ve been fascinated by the internet as a communication tool from its very early days and so it’s just natural to take advantage of what it has to offer these days. I don’t think there is a better way of staying in touch with our fans and that is very important to me. I’d actually love to do a lot more and I’m always chastising myself for not blogging more frequently, so I’m very glad you noticed that I at least try.