For over a decade SoiL have unquestionably been one of the defining bands in modern heavy music and two months prior to the release of their fifth album ‘Picture Perfect’, SPHERE were lucky enough to grab a few words with the group about the new record following their storming set opening up the Saturn Stage at the UK’s first Sonisphere festival… 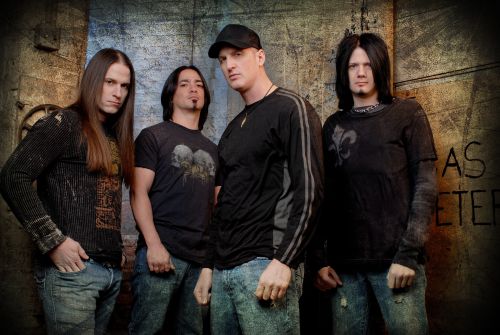 S] Tell us about your set today, how did it feel to open up the UK-leg of Sonisphere?

A.J.] We were very excited, and totally pumped up. The crowd was really ready to go and even though there was some light rain, it really didn’t spoil the mood at all. We went out there and really had a great time.

Adam] What else can you say? I mean, it was really amazing. The band were talking earlier about how we were going to come back to the UK so that we could tour and get ready for the new record that’s coming out in October and this really came out of nowhere to be offered a slot at Sonisphere. It’s a real honour and the timing really couldn’t be better for us right now.

Tim] Yeah, we found out about it and they wanted us to come over for a special one-off engagement, so we came over and we really pulled it off. I mean, we had a week-and-a-half to prepare for it. We had to get flights and everything – A.J. actually flew in from LA and we flew in from Chicago yesterday, we played today and we’re going to stay tomorrow [Sunday] to check out Metallica and some of the other bands including Paradise Lost and then we’ll fly out again on Monday.

S] We’ve seen you play tiny venues and massive festivals over here – what do you enjoy most about playing in the UK?

Tom] It really is always great for us, whether we are playing in the little rooms or the bigger ones. It’s a great experience for us and we truly love it. We always love coming back, that’s why we spend so much time here.

A.J.] Yeah man, whether it’s a small or big room we are always going to go out there and touch people. We’re going to grab em’, shake em’ and love em’! It’s always a lot of fun, and it doesn’t matter what size the stage is.

S] On to the new album – what’s the story behind ‘Picture Perfect’ and thematically, how does it represent the personal progression of the band?

Tim] This new album is our first as a four-piece. We took about two years to write this record and we really honed in on each and everybody’s parts. You can really hear a lot of guitar work on it and the bass and the drums are doing more. There’s also a really solid rhythm section on it and there’s just so much more to everything. Being a four-piece this time around, we have been able to really expand ourselves musically rather than being held back by keeping everything at one constant rhythm. We feel like we’ve really expanded on this record and that we are able to explore things that we were never able to before as a five-piece band.

S] Is there a specific song that represents the state of the band currently?

Adam] Everybody in this band has their own opinion about the songs. I do think that we did write a record that we all like, which is very cool for us. I mean, it’s a whole group of songs with a life of their own. The way that we wrote this record, it didn’t come out like a big, planned-out contrived thing – we really just relaxed into it, got together on a fairly regular basis and did what comes natural to us. It wasn’t really hard, you know? We cracked open some beers, talked and then played a little bit. Once something came together we’d simply record it and it would sound awesome. Honestly, without having a deadline and no label pressure we were able to work until we had this collection of material, and we just came out like, ‘Wow, we have a lot of stuff here, and it’s all really good.’

A.J.] It’s really hard to choose when you’ve got over 20 songs, and you love them all, to pick just 13 to use for the album. That’s a good problem though. There really is no one song that represents the whole thing. For us, every song is its own little baby and it’s all a reflection of the direction in which we are going now. All of the songs have their own flavour – some are deep and moody, some will punch you in the face and some will make you think. Really, these tracks go everywhere and that’s the way we like it. There’s a great sense of freedom like Adam was saying and there was no stress during the writing process and that really meant that a lot of creativity could come out of it, that really shows in the music and I think the album as a whole will represent that.

Adam] I think that it covers a broader spectrum – we can each say that it’s going to be like this or that, but I think that it touches on something that we’ve done from every record and then it takes it one step further with stuff that we’ve never done before.

S] You guys have always toyed with a variety of sounds in your music – how are you moving with your sound?

Tim] We basically took the classic SOiL sound and took it back to basics with real rock n’ roll. I mean there’s that classic SOiL heaviness with the chugging guitars, thunderous drums and everything like that but we really touch back to some elements of classic rock-type styles like Aerosmith, Alice In Chains and Sabbath. We even have one song that we call ‘the Smashing Pumpkins song’ on there because there’s definitely that vibe to it. We touched on things that were really sacred to us back in the day. It’s something that we always really strove from the very beginning, but we were really able to bring those elements forth on this record.

Adam] It’s like we said, we weren’t sitting around thinking about how we wanted this record to sound it just came out naturally – it was never about keeping up with anyone, or trying to sound like anything. We were in a room and honestly we were locked off from what everybody else in the world was doing and just did our thing without any other influence or any kind of intervention.

Tim] Yeah, you really can’t chase trends anymore. You really have to just do what you want to. Bands that do that now are over before they start. We have never been that kind of band you know? This is our fifth album. We are who we are but that doesn’t mean we are not going to kick everyone’s ass.

S] You guys always have had to work pretty hard, so what’s been the hardest moment for SOiL over the last few months, and how did you come through it?

A.J.] [laughs] Well we actually have a list. I mean, the recording took longer than we wanted but it ended up sounding exactly how we wanted it to and that’s what really matters. You can never go into a studio and think things are going to go smoothly. For the whole process we just had to roll with the punches and things didn’t always go exactly as planned but the finished product was perfect.

Tom] Some of the business stuff was not sewn up but now we have some great support and it was really kind of nice because we were able to just take our time and do what we wanted. It really was a great way to work without having any pressure. All the business stuff is sewn up now and in place so it is all perfect.

Adam] I think that another reason it took so long to record though, is because we took a very long time to do the writing. Once again it wasn’t a conscious effort to say, ‘Oh yeah, we’re going to take x amount of months to write, and x amount of months to record it’, I think because we wrote the way that we did, subsequently the recording had to be scrutinised and gone over. It had to meet the standards of the writing. We are now taking our time to make sure that every step we take from this point is going to meet the standards of what we’ve done before. We want this to be a new beginning and a fresh start. I think that while every record can be that for any band, we would like to pride ourselves on this one a little bit more than we have ever done before.

S] If SOiL could sit down with one person (metal legend or not) dead or alive and listen to ‘Picture Perfect’, who would it be and why?

Tim] Just one person? Wow! You know what? I wouldn’t mind seeing what Elvis Presley had to say about our record. He was like the ‘King Of Rock N’ Roll’ so just to see what he would think about the fact that what he started, created SOiL somewhere, somehow. [laughs] Either that, or I would like to sit the guys from Heaven And Hell down – we still might! I’d like to see what Geezer Butler, Tony Iommi, and even Ronnie James Dio would say about it, but yeah, I think Elvis would be cool.

A.J.] We’re going to sit them down and say, ‘Listen to this!’ Then they’d be like, ‘Who’re you guys again?’ But yeah, I would like to sit down with you and listen to it, just like regular people.

Tom] I don’t really have anybody clever in mind but any person that wants to listen to the new record, I would love to sit them down and play it for them.  I’m very proud of it.

Adam] It’s very hard to pigeonhole I mean, the first people I wanted to hear it when it was at the end were the people closest to me, like my girlfriend and my family. Beyond that, while I do appreciate my idols and influences I write for myself and for us. I am more interested in what fans of the band want to hear and say, that’s more interesting to me than what any one single person would say.

S] What are your biggest plans following the release of the new record in October?

Tim] It’s going to be November 4th through to the 15th and we’re coming back with a band that’s getting pretty big over here, though they’re not from around here. The announcement’s coming soon. You all better come out and hang with us.

S] You had a great reception from the people here today, so what’s your message for the people that saw you at Sonisphere?

Tim] Thanks for the pleasant surprise.

Adam] It’s always an honour, and we look forward to coming back again, and again.

Tom] We’ll be back soon, thank you.

It was announced a short time ago that the band would be touring the UK with Shinedown in November.

*Many thanks to Mike Exley and the band.

– Check out our reviews and photoblog from both days of the Sonisphere festival.