Formed from out of cult Goth act Cinema Strange, The Deadfly Ensemble are creating quite the cult following for themselves on a worldwide scale in 2009. With their avant-garde alternative sounds, strong visual imagery and a penchant for all things theatrical and weird, we thought that now would be a good time to catch-up with the a few of the band’s members. We spoke with vocalist Lucas Lanthier, bassist James, guitarist Steve, cellist Marzia, and the group’s project-manager Bonzo for what turned into our most entertaining interview yet.. 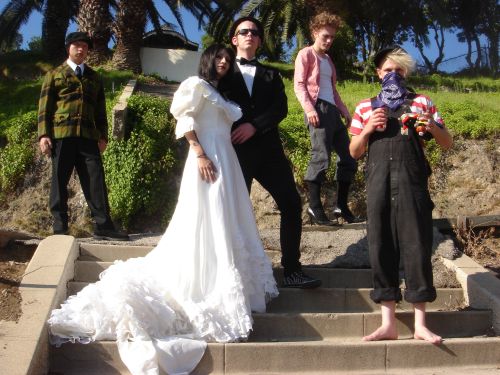 “If we don’t get those porpoises some guns, nobody will be hearing their song”

S] How are you looking to expand the vision of your Cinema Strange and Deadfly Ensemble projects individually over the rest of this year and into the next?

Lanthier] The focus in the coming months, besides my new charitable organisation (providing armaments to the nearly blind river dolphins of the Yangtze) is preparing material for a third Deadfly Ensemble album. That’s going to take a bit of time, especially working cross-country as we do. (I live in New York City and everyone else is 3000 miles away in Los Angeles.) But in spite of those geographical challenges, we’re making good progress. Then it’s back to more live shows and a Euro tour.

Bonzo] I’m also trying to get Lucas to play more solo shows, which allow him to perform Cinema Strange and Deadfly material in a new way.

James] I was just trying to get him to play with himself less.

Lanthier] Either way, I still like to pretend I have a band up there with me.

Lanthier] Otherwise I’d shit my knickers. Some things I can’t do alone…

Bonzo] Don’t be a baby.You’ll get up on stage when I tell you to and you’ll like it, you cu*t.

Bonzo] Now answer the next question, goddamn it.

S] What are you looking forward to about returning to Europe and the UK in the near future, do you have any special themes and ideas to take with you?

James] Steve and I would just like to go home (we are both from England). All this Deadfly slave-labour is s*it work for peons.

Lanthier] A few shows in old Blighty would be awful nice. We’ll have to look into that. I don’t usually throw bones to the slaves, but I’m interested in this idea, as well, so…

Bonzo] What? The Econo-Lodge lounge in Tacoma isn’t good enough for you b*stards?  I break my back getting you these gigs, and this is what I get?

Lanthier] I like the Econo-Lodge! Great breakfast buffet!  Does England have Econo-Lodge?

S] It was once a plan for you to release a live DVD, is that still an option – what kind of stuff will you include?

James] We are still very much interested in this as an idea, and have been collecting footage from various places. The picture of what this would entail and how we would respond to what was being made (as in the addition of extra stuff) would be very dependant on what the thing was looking like. I really just want to tickle your bellies or at least endear myself to people’s mothers.

Lanthier] A video montage of me modeling my swimsuit collection is at the top of the list for bonus materials.

Bonzo] Quiet, Lanthier. Early on, a marketing strategy for the Deadfly Ensemble was based on slowly and steadily winning support from people’s mothers. It’s a Long Game, admittedly, but we really feel the results will be fantastic.

James] Kind of like what happened with your mother. Scrumptious.

Lanthier] People’s mothers simply adore me prancing about in a speedo. That’s all there is to it.

S] Your stage show is delightfully strange, you incorporate all manner of theatrics – what emotions do you wish to evoke within your audience with the stories that you create – take ‘Horse On The Moor’ for example?

Lanthier] Tell ’em what we think about that, chums.

James] Wishing to evoke things from people other than sexual appeasement means I would have to care about how they felt. Buy me a drink and maybe we can make that show more intimate. I couldn’t give a fuck less what that knot-headed fool [Lanthier] was singing about. I just love to laugh at the people who do. Thank you audience for being novel for me and continuing to allow us to act how we please.

Steve] I have never known of a direct link between the stage show and any of the lyrics Lucas writes. I figure it’s kind of more to the point to separate the link. I remember the last LA show we played and  the guy introducing us, who thought he was hip to the way we work, asked Lucas something along the lines of ‘So what’s the crazy theme you guys have for us tonight?’. Lucas replied, ‘Nothing tonight.’ The guy was kind of set-back. Then out of nowhere we had an entire fake band with a conductor join us on stage. It might sound selfish, but often the stage show is almost a band only thing. Like we play the songs for the audience, and put on a show for ourselves at the same time.

Bonzo] At first glance, none of this seems like it would necessarily endear one to people’s mothers, but remember it’s a long game.

S] How does your focus and drive change when you are working on music for Cinema Strange in contrast to The Deadly Ensemble?

James] Having watched Luc for years before playing with him, I can tell you that he always works in the same manner and that the other elements tend to dictate the work flow. If you don’t enjoy him working over the tip first I suggest you work with someone else.

S] Lucas, how do you feel you have grown and developed as a musician throughout your career? 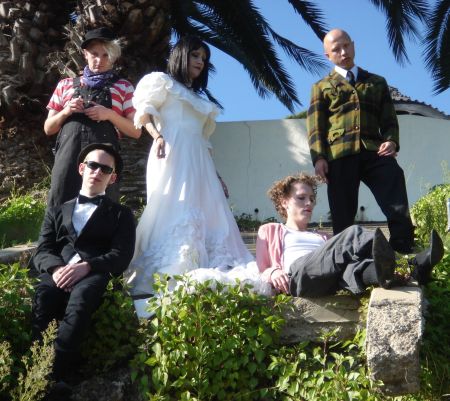 James] There are a couple of places he tends to grow each time we see him. Go figure?

Lanthier] Christ, I don’t have to say a thing. James just knows me too well. However, I could add that in the early days I would never misuse my performance space for irrelevant political agendas. At that time I was performing for the sake of art and art alone. But now I often subvert a musical performance with activist diatribes and revolutionary tangents. The other guys are patient, but I could tell that during one of the last shows, after I’d talked about river dolphins for almost an hour, they were getting antsy.

Bonzo] The audience, as well. They wanted to hear a song, I think.

Lanthier] Well, if we don’t get those porpoises some guns, nobody will be hearing their song. Ever again.

Bonzo] That’s what you said about pandas, too, and remember how that turned out?

Lanthier] ‘Guns For Pandas’ didn’t exactly pan out as I expected, it’s true…

Bonzo] It was a fucking disaster.

Lanthier] Who knew they’d turn on each other? I just wanted them to take their land back via armed insurgency. But ‘Guns For Dolphins’ will be totally different, I just know it.

S] If you could each sit one person down (it can be anyone) to watch a Deadfly show, who would you pick and why?

Marzia] I would like to sit people down watching Helen Keller watching us.

Lanthier] By Jove. Now that is theatre.

James] Ghengis Khan’s mother for popping that fuck out. Thanks Mum.

Lanthier] I think I would sit myself down to watch myself.  I think I could learn from me.

Bonzo] Why don’t you just watch a video of one of your shows, you creep?

Lanthier] I can’t smell a video, can I?

S] What is your biggest personal inspiration in life?

James] The complete and utter lack of fairness in the world. There will always be some cu*t ready to slap the last morsel of food out of your sloppy mouth-hole.

S] How do you believe the world will end?

Marzia] Giant volcano. The one in Yellowstone, methinks. And Yogi Bear will trigger it.

James] I could not give a fuck-less and do not think of such things. Unless I am attempting to usher it in. It is kind of like fu*king; the good shit is always unexpected.

Bonzo] If Lanthier has it his way, it’ll probably involve dolphins and pandas with guns or some other Christless mess.

Lanthier] Aw, the little darlings would make such adorable angels of the apocolypse!

S] In the spirit of theatre, ideally, what would you like one to wear to come to one of your shows?

Marzia] I think we have seen it all. Mohawks, misty graveyards, the whole shooting match. It’s not that we are an anti-fashion band or anything, it’s just that when people dress in a certain way to see a certain act they sell themselves in a certain manner. We as a band know, and are all very guilty of many typical trends that our audience participate in. We also know that to pull away from that and portray the music in its truest form we can open the flood gates to anything. Deadfly has been pigeonholed many times over, and every time we attempt to destroy that stereotype. Not in a callous way, but in a true spirit of fun.

Lanthier] By jove. Now that is theatre.

Bonzo] You said that already about Helen Keller.

Bonzo] Nice one, James. Thanks.

S] Do you have a message for your European fans?

Bonzo] Perhaps we should leave it at that. Thanks for the chat!