Chicago’s Kill Hannah are often thought of as one of the most evocative acts on the modern alternative rock scene. Their music effortlessly bridges the gap between rock and electronic music whilst incorporating powerful and uplifting lyrics. Over the last year, especially over here things have been quiet in the Kill Hannah camp. We went to break the silence and had a quick chat with the band’s guitarist Dan Wiese about what’s been going down and the inspiration and ideas behind their forthcoming album, ‘Wake Up The Sleepers’. 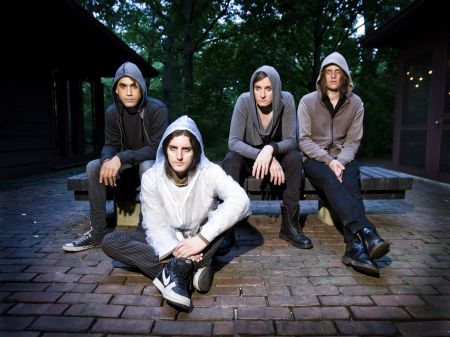 
S] Can you explain the themes and ideas behind your forthcoming album, ‘Wake Up The Sleepers’?

Dan] I don’t know that there is a specific theme that permeates the entire record, so this is a tough question to answer.  But I’ll say that when we started tracking, the band was in a very weird place.  There wasn’t a record company that we were in business with, and the band line-up was shaky to say the least.  We had to dig really deep to find a reason to get out of bed in the morning and go into the studio. I guess that everyone in the band had to come to his own realisation that this is simply what we do best and that we’d be empty inside if there wasn’t a new Kill Hannah record.  So I guess that this record is the sound of us chasing away the emptiness, if that’s not too melodramatic. [laughs]

S] What are the main themes behind your two new tracks, ‘New York City Speed’ and ‘Strobe Lights’?

Dan] Well, Mat [Devine, vocals] wrote the lyrics for both of those songs, and he’ll have some explanation of the literal meaning.  But to me those songs are about pushing the envelope and coming out of your shell.  The songs are musically and lyrically cathartic, and they’re good to listen too when you’re on the verge of doing something you might regret.

S] How would you sum up the new material in terms of its sonic impact, early indications show a real focus on the electronic parts of your sound but there’s also a definite classic rock influence too?

Dan] Wow, I’ve never heard our music described as ‘classic rock’ but I like it.  We definitely have a few songs that rock in the ‘classic’ sense and this might be the first time in my career that I’m not immediately offended by the connotation. I guess that we’ve just pushed the boundaries of who we are as a band a bit more on this one.  Two of my favourite songs on the record don’t have any guitar in them, and I’m the guitar player. The impact probably comes from that feeling that I described before, that feeling that we had when we started recording with no real idea that it would ever be heard by anyone.  I don’t give a shit about scenes or labels anymore. I’m not worried that people will think that we’re too electronic, or too glam, or too Gothy or Industrial or whatever.  I mean, there’s a moment on the record when I’m quietly playing an acoustic guitar underneath a children’s choir, and the next song has a guitar solo that’s longer than all the other solos on all of our other records put together.  Please, describe the sonic impact to me when you hear the record because I don’t have a clue.

S] Mat said previously that the new record would be heavier and more aggressive than anything before, is there a specific track that represents this?

Dan] I don’t want anyone to be mislead into thinking that we’ve made some sort of progressive metal album. I’m not trying to be cryptic, but I’ll say that this record makes my chest feel heavier, if you know what I mean.  The heaviness on this record comes more from the lyrics and the depth of the music. This album is risky and desperate and honest.

S] You had to cancel the last UK tour because of a recording issue – you have such a dedicated following over here, so when will you be back and will they be mostly large scale shows or will you be playing some more intimate dates as well?

Dan] First of all, I need to say how heartbroken we were to have to cancel that tour. We brainstormed for a long time trying to figure out a way to play the tour and also finish the record but it was simply impossible.  I know that, in the grand scheme, we did the best thing though because I’m so proud of the record.  Anyway, we are constantly entertaining tour offers that will bring us back to the UK.  Ideally, I’d love to start off with some small shows and build back up to the big ones. That’s the way to do it and maintain integrity. It’s back to basics for us.

S] How do you think that this album represents the growth and development of the band as a whole?

Dan] This is a great question and I guess I’ll avoid answering by turning it around and posing the question to the listener. That’s a bit of an asshole move but it’s truly impossible for me to maintain perspective on our growth because it’s all so close to me.  But keep in mind that ‘Until There’s Nothing Left Of Us’ was released in America in 2006. A lot has happened since then. We’re a different band and different people in so many ways. I will say again that this is the record that I am most proud of.

[S] The content of your albums has always been focused on uplifting ideas and to some degree overcoming adversity – how do you think the themes of this new album might resonate with old and new fans alike?

Dan] A big part of me hopes that this record is exactly what every fan will want from us.  But I know that this is not possible. Of course there are fans that will think that we’ve changed too much or lost our edge. But you can’t please everyone and I can tell you that there’s no ‘Unwanted’ on this record.  But I give a lot of credit to our audience and I think that they are smarter and have more emotional depth than most bands and record industry people give them credit for. Kill Hannah has amazing fans and the ones who have stuck around and really listened to us will definitely get something from this record that they haven’t gotten from us before.

S] If each member of the band could sit down to dinner and listen to the new record with anybody, dead or alive, who would you pick and why?

Dan] I hate these kinds of questions. It’s a test to see who I think is the most artistically and intellectually important figure in history. Take your pick; Sarte, Edgar Allan Poe, The Dalai Lama, Jesus?  Actually, on our last tour, we had a day off, it was  just the band and crew, and we had a barbeque beside this beautiful lake in Idaho. We made steaks and fish and drank wine and listened to the record on a tiny portable iPod stereo. It was the perfect listening experience with guys that I spend way too much time with already. But they also get it more than anyone. It was an amazing afternoon until Mat changed the music to some horrible hipster electro bullshit.

S] The band is known for being close to its fans, you all are very active online outside of the band and of course very energetic onstage – are you exploring new ways to reach your fans throughout the rest of this year and into the next?

Dan] We have been working very hard on staying in touch during our touring hiatus. The MySpace page is always up to date, Killhannah.com has been relaunched, and we are currently all tweeting.

S] What are your most exciting plans for the rest of this year and into the next?

Dan] We’re desperately hoping that this record gets a worldwide release. We’ve always dreamed of touring Asia and Australia.  And of course we intend to spend as much time in the UK and Europe as possible. Stay tuned!