Recently SPHERE magazine’s Dom Smith and Shattered Glass Media’s Craig Slaney teamed up to interview Papa Roach in Sheffield. We spoke with guitarist Jerry Horton and vocalist Coby Shaddix about the band’s music, touring the UK and some future plans. 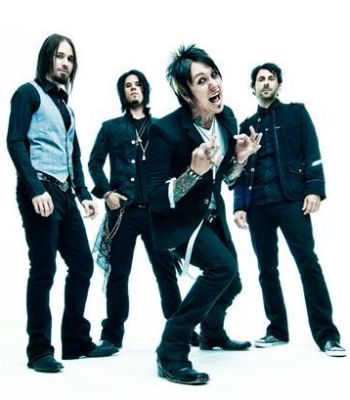 “We’re kinda in a league of our own now”

Jerry] It’s been really good, it’s nice to get back to Brixton, and all the rest of the shows had pretty much sold out and the energy has been great at every one.

C] Touring with Madina Lake, how did that come about?

Coby] We ran into them in the United States, we did a show with them in Virginia. We were just talking to them about their plans for the fall and they said they were thinking about going to the UK in October. I was like fu*k, we’re thinking about going then too, why don’t we do something together? They were totally into it, and we’ve known them for a few years now anyway, and I think it’s cool to mix it up with styles too. With us, we’re kinda in a league of our own now, we don’t sound like every other rock n’ roll band out there. We’re not a screamo band, we’re not a metal band, we’re not a punk rock band, we’re not a throwback rock band, we’re just Papa Roach, and for us we’re able to play with all different types of genres, so we felt that it’d fit.

C] Would you say you’ve had a stand out moment on this tour?

Coby] I’d say Brixton for me personally. It’s a great venue, everyone in there can see the band. It’s big enough to be big rock, but it’s still an intimate rock show, so for me that’s like the best of both worlds. And it’s in the centre of London, where people have come together to celebrate Papa Roach’s music and have a good time.

D] Cool. With you saying that you’re kind of in a league of your own now, how do you guys feel about your position in the industry compared to where you were when you first started out?

Coby] The industry has changed so much. If you consider what sales used to be like in like 2000, that was like the peak of sales, but ever since then the industry has been tapering off. The music business is hurting, but the rock n’ roll touring world is where we really focus our energy towards. You can’t download the rock experience, where you come to a live show, getting on the train with your friends, going to the show, drinking a few beers, going to watch your favourite band, possibly meeting your next girlfriend… you can’t just get on a computer and do that. The file sharing and all that you can do at the computer, but our music is really just an invitation. Another thing too is that our sound has changed and our image has changed, so for us it’s just a reflection of who we are and where we’re headed. Plus, I think now we’ve got some fu**ing respect, which is rad. When we first started out no one really respected us, but now we’ve got respect from our fans as well as from people who wouldn’t normally go and see Papa Roach are saying, ‘That band fucking rips live. They’re so consistent, they never step onstage and go half-assed’.

Jerry] For me, being in this band has afforded me some great experiences. Being able to share that with these guys and getting feedback from fans saying that our music helps them, I couldn’t have imagined anything better for my life.

Coby] It’s taken me to some fu**ing crazy places, you know, with my physical body and my mental body. We’ve travelled around the world and I’ve had great times and I’ve had horrible times out there on the road, and now we’ve got families and stuff so that’s changed for all of us.

D] Cool. The last album has been out for a while now, what’s the score with new material, is going to happen anytime soon?

Coby] For us, we’re just focussed on touring this record. We’ve been out touring it for over a year and we’re just gonna see where it takes us. After that, we’ve got a recording studio back home in Sacramento called The Red House, we’re really excited to go back there. We haven’t written or recorded on Sacramento since ‘Infest‘, so it’s going to be interesting to see how being home influences the music .

D] There’s one particular song on ‘Metamorphosis’, the last single, ‘I Almost Told You That I Loved You’, the lyrics are very strong, what personal experience triggered the writing of that song?

Coby] I was actually talking to my friend who directs porno movies, he was telling me about a personal experience of his, so it’s not really my personal experience. He was fu**ing this girl before he put her on camera, he decided to try her out to make sure she’d be good on camera, and he told me that it was so good that he almost told her that he loved her, and straight away I was like that’s the name of a song right there, so I took this sexual edge and wrote my own version of that. I think that song makes the record entertaining, it gives it a human edge because it’s not so serious all the time. Our fans really dig that song too, and lyrically it’s on a totally different page.

D] Right, we’ve got a couple of more random questions for you now… if you could sit anyone in the world down to dinner with you and play them your album, who would it be and why?

Coby] I’d pick Howard Benson, our producer from the last two records before this one. We moved on, I’d like to see what his reaction is to this record, because I learned a lot from Howard as a songwriter and an arranger, as a vocalist, I think us breaking away from him and trying spread our wings and fly, it’s been a great learning experience.

Jerry] I really don’t know who I’d have. I think I’d just have my family… and I’d feed them haggis! Up until a few days ago I was repulsed by the idea, but then I tasted it and it was really good!

C] In the event of a zombie outbreak, what would be your weapon of choice and why?

Jerry] I’d go with a chainsaw. You gotta cut their heads off clean right?

C] Yeah. A couple more normal one’s before we finish, are there any UK bands which have caught your eye recently?

Coby] Gallows. I thought ‘Orchestra of Wolves‘ was a good album, but the new record, ‘Grey Britain‘ just fu**ing slams! It’s got elements of classic punk rock, hardcore, classic metal, lyrically it’s a really rad record. The short film they did was really cool too, that’s what really got me into it. They’re a punk rock band that really stands for something, you know.

Jerry] Yeah, I was really taken by the film. I thought they were really creative, they had a vision for it, and they did it really well.

C] Is there a message you’d like to send out to your fans that come across this interview?

Coby] Thanks for coming out to all the shows and making it a great experience, it’s put a really good feeling in our guts about coming back to the UK, and putting out time and effort into building our fanbase up. I love it!