GHOSTKID on his artistic vision, attitudes to success and more

To discuss his artistic vision and his solo venture after leaving the German metal band Eskimo Callboy, Dom sat down with Sebastian “Sushi” Biesler to talk about his new solo project under the name of Ghostkid. Straying from his previous roots in Eskimo Callboy, he admits the challenges of going from six band members to one and the importance of leaving a legacy in the music industry. 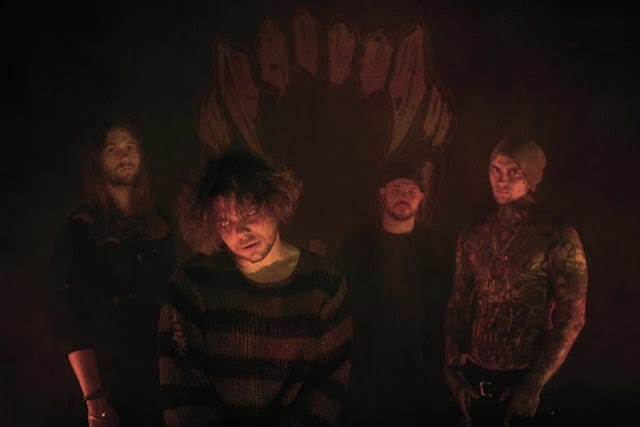 Former front man and promising the exploration of the boundaries of metal combined by enthralling visual art, Sushi’s new career has been exceptionally received by fans his fans even after ten years of Eskimo Callboy before his departure. “You know when I started everything, it’s really hard to figure out what chances you’ve got of reaching out to the people,” reflects Sushi, “now it’s just amazing – the people really like what I do. I’m f**king happy man!” Transforming from a band member in a group of six to going solo is always going to be a huge challenge but it seems as though despite his initial struggles, Sushi has welcomed this prospect with open arms. He explains: “I would say the biggest difference between playing in a whole band to doing everything on your own is like you focus on much more stuff. I thought it would be easy to do everything on my own because I’ll be the last one to decide but it’s like the complete opposite because you overthink stuff a lot because when it means a lot you, you try to do it as perfect as possible.” This new approach to his artistry is certainly proving to be a worthwhile experience as he also expresses, “I guess I grew up a lot more than I did in the last 10 years,” despite being in a highly successful metal band before his change in vision.

Though his time in Eskimo was spent successfully creating records that would continue to stun audiences beyond Germany, Sushi believes that as he’s entered a new realm of artistry, his maturity and perspective has risen to a different level. “I would say that I’ve really improved myself as an artist in general…if you have to do everything on your own of course you have to discover new perspectives,” he discusses, “what is pretty cool is that I’ve proved to myself that I’m capable of writing a record on my own and this is something I’ve never done before.” Proud of his achievements in the past year since leaving Eskimo to pursue Ghostkid, he reflects on his creative struggles working in a group compared to working solo: “I wrote a few songs when I was in Eskimo – I always love to compare it. So if there’s six people in a band you always used to try and pass it on with six people at a time so it’s really hard to find some kind of a structure so you can really focus on a good idea.”

During the creation of his project and the release of Sushi’s music including an album under Ghostkid, he expresses that the process was “the best and the worst time that [he] ever had because it was a f**king rollercoaster.” His self-titled album was released at the start of November this year and is already proving a massive success within the German metal scene, demonstrating the power of solo artist material. “It was like pretty crazy because in the beginning when I left Eskimo, there was a lot of down phases because I didn’t know whether I could make a living again and will all the people love what I do,” Sushi reflects, “when you see the process of doing this on your own and see that you can create on your own, you really feel emotionally attached by that – that was a really big reward for me and I think that was the most important thing and the best thing as well.” Sushi elaborates as he admits that his break from working with the band allowed him to express his emotions and feelings in a much more relieving way than he had previously explored in a group environment. His passion and persistence towards his music and solo career is certainly something to be admired.

With the current climate being online and the lack of physical concerts, this is the age of music videos and enthralling visuals to keep an audience supportive and glued to an artist. Undoubtedly, Sushi has mastered this with Ghostkid as his music videos include intriguing narratives and formats that would amaze anyone looking for new metal to get their teeth into. However, what inspires Ghostkid and his visual journey? “Sometimes I’d see some really inspiring art you know and I always try to save it to see,” he expresses, “If you’ve got the music and the art together, there’s always something that really inspires me.” Arguably, Sushi’s approach to finding inspiration and using it in a compelling way shows his move from band member to solo musician as he stresses the idea of keeping an open mind in creating visual art to go alongside his music. “Really it’s like, if you are an artist you represent a bit more than just music,” he says, “think about it like back in the day Slipknot became this big thing around the masks because it tells a story for an artist – I think you have to tell a story.” Narratives have been an increasingly effective method in marketing an artist and there is no doubt that leaving a legacy is exactly what Sushi strives for in introducing Ghostkid to his following. With his he states: “In music, if you have to tell a story, try to tell it a bit more interesting because there are a lot of great bands out there that do the same thing. Tell your own story and try to make it special. Don’t be afraid to be different.”

On the mention of success, every artist always has a different opinion on how they define it, and Sushi is no exception when it comes down to the rollercoaster of his artistic journey. “It always has two sides – you shouldn’t just focus on success and earning money and sh*t,” he advises, “of course if you love what you do, you want other people to recognise that. I would say that for me the biggest success is that there are people out there that have got to connect to what I love.” In such a competitive and vast industry, sometimes doing what you love does not always pay off but this is not the case for Sushi as he admits: “I tell my own story and it’s a big honour for me that people relate to something you know. That basically means success that you can create is something that would probably help somebody through a really bad time or cheer them up.” Since leaving the band, Sushi has made the feeling of connecting emotionally with his audience the very top of his priorities as he declares: “I started doing music because I wanted to have a home – it’s the same for many people out there and I guess that’s success. The people that really support you and the people that fuel your music the same way you do.” Amid his chaotic departure, it seems he has found sanctuary in his fans and their continued loyal support of his career.

For upcoming artists, to get to an established level with a large following takes roaring passion and commitment to your career, but as Sushi began his career as a metal artist, so did the constant comments from his peers telling him to give in and find a “proper” job. “It always depends how hard you work…when I grew up and told people ‘I will do music’ I tried to be a Rockstar,” laughs Sushi, “like nobody takes it seriously but this is how everything starts but if you just keep on going and just work hard it really pays off.” With this, Sushi is defying expectations with his new project and making a name for himself in the metal scene, proving wrong the people that originally doubted him, “I would never listen to them, I really kept on going and everything changed at a certain point because then the people who told me those things in the past started asking for my autograph because a friend of theirs really loved my music.” After striving for complete perfection in a band environment that slowly became the bane of his life which Sushi states was “so frustrating because nothing happened”, the new focus of a solo career was exactly what he desired as he also admits: “I really discovered that it’s much more important to do something you love because that’s the only thing in the end…I think that’s the biggest thing that counts – that you’re happy in the end.”

With already a promising start to Sushi’s new career as he ventures through the realms of solo artistry, for metal fans of his music it will be incredibly exciting to witness the great feats of the explosive new artist. He promises a plethora of captivating new music and visuals in the new year and it is certain that Ghostkid is already leaving a legacy in the industry.