“From age fifteen to about twenty two I couldn’t attract a sane chick,” says Josh Todd of Buckcherry, reminiscing the songwriting process for ‘Crazy Bitch,’ that staple track so many fans got their introduction from. “Just these crazy bitches that were really good in bed but horrible girlfriends.” So many of us remember hearing that for the first time and inevitably getting hooked into the band’s entire discography, and as fans ourselves, it’s one we simply have to ask about. “The Paris Hilton sex tapes had just come out, and I thought it was so funny that somebody could launch a show-business career from just a homemade porn.” More to the story than meets the eye? “We wrote a lot of songs during that time and ‘Crazy Bitch’ was one of them, and it just sat there for like three years before it even got on a record, and it almost never came about.” 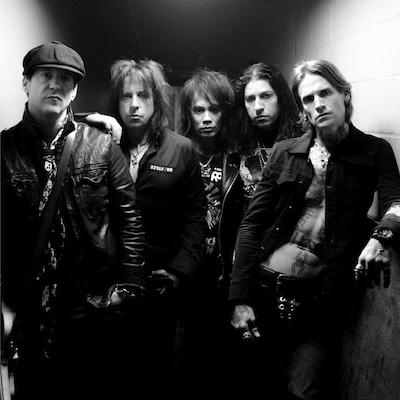 “The new material is going to be so wrong, it’s right…”

With classics like ‘Crazy Bitch, ‘Lit Up’, and…there’s so many to choose from that this list would be futile, so let’s go with the fact that there are almost seventy strong tracks on their back catalogue now, and it seems only natural that a band with such monumental success would release a best of album eventually, and now it’s out. We ask Josh how this project came about: “Our record label wanted to do it. We weren’t really thinking about it, we had six records out there and so I think it’s a good compilation of the singles over the years, and it’s cool for us to have in the catalogue. We’re far from done working on new material, we’re already working on a new EP, and that’ll hopefully be out the first quarter of next year and this is gonna be really cool for people who like Buckcherry. I’m excited because I grew up on independent records and a lot of EPs, so I’m a huge fan of them, I can’t wait to do one.” We’ll certainly be looking forward to that. Failing to conceal our excitement and delving into it further, Josh exclaims, “You’re gonna love it man, it’s gonna be sick, it’s gonna be so wrong that it’s right.”

It’s cool to see that not one, but two (yes!) tracks (‘Gluttony’ and ‘Nothing Left But Tears’) from 2013’s ‘Confessions’ made it onto the compilation too. “Those are great songs, and great songs live. We wanted to have them on there, it was very important, and that’s the thing with a ‘best of’, it’s hard, because you only have twelve slots and we’ve had a lot of singles over the years.”

Let’s look back then! ‘Confessions’ has been out for a while now, so in homage to the success, both musically and in terms of the reactions (seriously, this album is sick!) we ask Josh about his reflections: “The music’s changed so much as you know, so it’s hard to get a gage about how your record is doing nowadays because everyone is so single driven, and not a lot of people are buying records, not in any genre of music, so it’s tough in that regard, but I’m very proud of the body of work and as you said I think it’s one of our best records. We worked really hard on it and I’m glad it’s in the catalogue. Tackling the seven sins – Keith (Nelson) and I talked about that for a very long time. They are timeless and a lot of people can relate to them, so that was a lot of fun for me as a lyric writer.”

It’s sad but true. People are jumping on the singles more often than not nowadays, with Spotify and iTunes ruling the market, iron fisted. Josh has a few things to say about it. “The physical CD is almost extinct, but hopefully making a record won’t be. Where can you get a physical CD anymore? Everyone gets their music digitally, digital sales have gone from thirty percent of our overall record sales to seventy percent, and that’s where it’s going so you just have to roll with it and figure out how to be successful. There’s always new challenges everywhere. There’s no other way but to embrace it and figure out how to stay successful.” Well, thank heck Buckcherry built their reputation on their awesomely energetic and interactive shows from day one. “Being out on stage, that’s something that’s never gonna change. People are always gonna wanna get out and go see live music. We have a worldwide fanbase who we can go and show up for, so that’s the really important thing. We’re always record-minded type people. I don’t know where the industry is going, but I’m afraid that it’s going to a place where everyone is just gonna start releasing singles. It’s just changing dramatically.”

Rule number one of course, is: having great songs. How do they put them together? “It happens in all kinds of different ways. Keith writes the majority of the music, I write the lyrics, and then we get in a room and start bashing it out and building a house. That’s really what the song writing process is about for us. We get a work schedule and come in four days a week and we hammer it out, then when I go home I take the music with me, and write lyrics at home, and on it goes until you get a record.” The newest album is very personal and close to home, but it seems that this isn’t the only influence: “I’m influenced by all kinds of things. This was a very personal record for me but not every record is. I take a lot of my own experience and I couple that with life around me and the experiences I have on the road with different people, seeing lots of cultures. I also like to read a lot, and that really influences my storytelling, because that’s what songs are, they’re short stories, all about emotion. I just take all that and put it together and I listen to the music and see where it takes me in my head and then I just start writing.”

As always, that gig set list only gets harder as the years go on: “There’s so many songs to pick from now and that’s a lot to compile. You always have the usual suspects that everybody wants to hear, ‘Lit Up’ and ‘Crazy Bitch’ and those type of songs. Those have always gotta be on the list, and then you rotate the rest of the set around those.” And of course, we were eager to learn what Josh’s favourites are. “So many, I love all of our songs. I like ‘Broken Glass’, and ‘Dead Again’. I love ‘Porno Star’. And ‘Dead’, that’s awesome. And off of the new album I’m really enjoying ‘Greed’ and ‘Wrath’.”

So what are Buckcherry’s plans for the rest of the year, then? “We’re coming to Europe, which is gonna be amazing. We’re doing almost four weeks there then going to Australia and doing a week there, and then we break for the holidays and finish up the EP, then at the end of January we  go to Canada and the States, and hopefully the EP will come out in March, and then we just keep touring all through the year, get back to Europe for the festival season in the summer, and that’s the plan so far.”

Those of you who have not yet experienced this band live, your chance is coming soon, and it’s a chance you’re not going to want to miss out on. The on-stage energy is unfathomed! “That’s what Buckcherry’s all about, live rock ‘n’ roll. That’s what we love to do.”

Listen to the full interview here: