We manage to catch up with Lisa Elle, lead singer of excitingly different rock band Dark Horses before their tour of Europe. We talk new music and inspirations here… 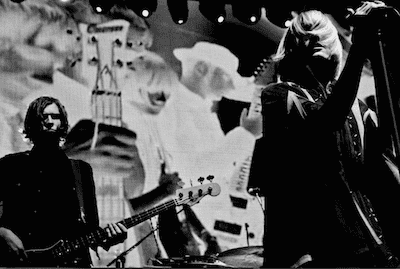 S] You’ve got quite an extensive run around Europe, are you looking forward to it?

L] “Absolutely. When you get to the second album, you’ve got enough songs then to really engineer the best possible set and make it the best live experience you can, whereas if you’ve got one album, you’re sort of stuck with what you have. We’re in a great point at the minute musically to have that opportunity to change it around and have loads of choices to make. So it’s exciting – and a bit scary.”

S] Over the years how have your inspiration and ideas changed since starting the band?

L] “Dark Horses was created after we first started recording. We worked with Richard Fearless in the studio then we realised halfway through, “God, this is a big sound. We need a band for this to do it live.” We developed a band and we got asked to do some shows with Kasabian really early on. I think our third show was Wembley Arena or something crazy like that. Now we’ve had that chance to live in the music as a group of musicians, to really explore that creativity and style, and our own individual styles, making this next record has been really solidifying that. So, I would say honing what we do and being braver and taking more risks with our ideas.”

S] How enjoyable was working with Richard Fearless again?

L] “Richard works in quite an unconventional way. He really knows how to sculpt sound because he has such a wide breadth of listening experience. We recorded in about ten days so we had to do up to two or three songs a day. Having someone you trust on a sonic and vibe level, you just know that they get it. They know where you want to go and they’re able to make those leaps between what you’re hearing, and what’s going to be on the record.”

S] Did the band get on with Richard? Were you all on the same wavelength?

L] “There’s a trust level thing; we have to feel we are supported by him and we can perform and play in a way that, if you try something that you’ve never done before, you can’t be too worried about whether it’s going to be good or bad. Having someone like Richard there, you can afford to do that because you know he’s going to tell you whether it’s good. It’s an amazing experience and a rare thing to find people that you can have that much faith in and vice versa. He’ll just give you a few words to go by if he’s trying to get a certain performance out of you and he’s fantastic.”

S] How did you find the process of recording the new album?

L] “I recorded the vocals after we did the music. I did a whole record in about two and a half days which was a really unique experience because you’re just morphing, trying to bring out this character in yourself. It’s almost like you’re making new friends; you have to acquaint to them in different ways from an emotional landscape. You have to bring out that real energy and that passion rather than something that’s technically perfect. It’s better just to have the balls to really go for it.”

S] Is there a song from the new material that you feel perfectly defines where the band is?

L] “There’s a song called ‘Wake Up’ which I sang very viscerally. It’s very percussive and there’s hardly anything going on. It’s bass and vocals most of the time, so it’s very punchy. I’d say the last record was more seductive, it sort of lured you in. It was more soundscapes and textures, whereas this record is a lot louder and faster, it jumps out at you more.”

S] How do you look back on what that previous record brought to you in terms of success as a band?

L] “I look back on it fondly. It’s a progression and it’s also experience, but it was very much a reaction to playing live and simplifying what we were doing. It was a great way to improve ourselves, in terms of pushing ourselves and making the best possible set, because you’re in the songs as much as your audience is. If you feel that something’s missing, chances are the people are feeling that too.”

S] What plans do you have post-tour?

L] “We’ve got some festivals coming up and that’s going to be amazing. We’re working with the new bass player, Anastasia, who’s Italian. She’s just coming in to do the tour. It’s really great for me to have another woman on the crew. Being that she’s got connections in Italy, we might go over there and do some work. We’re not really sure. We’ve got long journeys on the bus to make up the master plan.”

S] We’re based in Yorkshire – have you got many dates planned for here?

L] “We had a tour manager from Leeds and he showed us a good time so I definitely want to come back, but we’re not doing as many UK dates on this tour as we’d like to. We’re going to focus on Europe and then come back and play the UK when we’ve got the record out.”

S] And finally, to give our readers a better sense of Dark Horses, could you make up a Frankenstein’s monster for Dark Horses’ sound and influences?

L] “We’ll have the mind of Anaïs Nin, the groin of Georges Bataille, and the feet of Michael Clark the dancer.”