We had the chance to catch up with Dinosaur Pile Up at their glorious return to their hometown of Leeds for the Raw Meat All-Dayer. The guys talked to us about their travels, the writing process and what keeps them going. 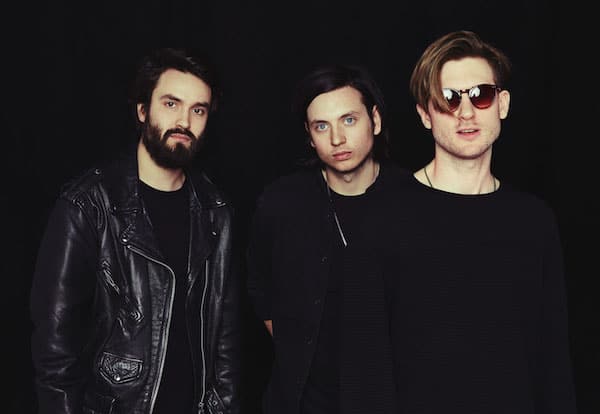 S] What have you guys been up to?

Matt] “We’ve just been touring. Doing a bunch of shit.”

Mike] “For a year, we were just not at home. We were on the road for like an entire year. Last year we were gearing up for the album release.”

Matt] “The touring year we did: US, Europe, Japan, US, India. Something like that. It was mad. Then we worked into the next year to make the record. That took a lot of time though.”

S] Are you taking a rest from touring now?

Matt] “I guess we’ve been chilling out over the beginning of the year. We’re sorting out ‘Eleven Eleven’ to come out in the States in the summer so I reckon we’ll be out there a little bit.”

S] How was it playing over in the states?

Mike] “Everywhere we’ve been on these tours in that last year we seem to go down really well, considering we’ve never been there, especially India. You get to a point where you’re like ‘now we need to capitalise on it’.”

S] People seem to appreciate the rock movement a bit more there and in the States.

Matt] “In the States our sound kind of translates pretty well so people seem to really get behind the band, which is awesome. The crowds can be cool. In India the crowds are f*cking insane. We didn’t expect that and I guess we didn’t know what to expect, playing rock shows in India, and none of us had been to India, but it was crazy.”

S] How is it to be back in Leeds doing this show?

Matt] “There are a lot of bands playing that we know and that we’re stoked about. The Xcerts are playing down the road, we’ll be catching up with them later. Marmozets have come down to say hey.”

S] Since you’re touring the world you must not get much of a chance to come back and see Leeds.

Matt] “Which is a bummer because we were just saying it’s where the band started and the Brudenell [Social Club] is still, for me, the place.”

Mike] “When we were in it we were so proud. It was like us and [Pulled Apart By] Horses and loads of other awesome bands coming up at the same time. It seems that there might be another scene coming through again.”

S] Are there any other bands emerging that you think we should check out?

Mike] “We listen to Allusondrugs a lot.”

Matt] “One day we’d like to take those guys out on the road and get a tour going. Tigercub and bands like that from Brighton. We listen to those guys all the time. There’s a lot of good underground music going on.”

S] What’s a typical day like in your lives now?

Mike] “Matt’s typical day is very different to a lot of people’s typical day because he wakes up really early, writes songs all day and then goes to bed really late.”

Matt] “It’s weirdly healthy and unhealthy. I write best at nine in the morning. Our days change quite a lot. Like Mike said when it’s writing time when we’re off tour I write a lot and we use that time, but if you’re on tour or getting ready for tour we’re either at the rehearsal studio or we’re just getting in the van going somewhere.”

S] Have you been writing new material?

Mike] “Matt had written probably five albums by the time Growing Pains was put out. Matt’s a prolific songwriter.”

Matt] “We do a thing where we’re kind of always getting demos together, but we form albums when it’s like ‘oh this is a vibe and these songs are a vibe’ so I’m kind of always writing. I love doing that.”

Mike] “It’s quite healthy because sometimes you get bands who have just stumbled across nine songs since their inception and they’re like ‘oh we’ve got to write songs, we’ve got a schedule’ and then it all starts to fall apart.”

S] How does the writing process go?

Mike] “There’s not really a certain way it goes. Sometimes it might start with a little seed of an idea that we’ve jammed together at practice. Most of the time it’s something Matt’s come up with already kind of seventy percent formed and we might change a few bits.”

Matt] “The rehearsal room is important because a seed of an idea is born in the room and I’ll take it away and write something and then we’ll f*ck with it.”

Mike] “It’s really important to have a leader writing the songs and leading the whole process.”

Matt] “My flat is quite boring because I feel quite comfortable in that space. I think if you don’t feel comfortable in the space you’re going to do most of your writing then it is hard to concentrate on what you’re trying to put out. I feel pretty good in my space because I don’t have to think about anything apart from what I’m doing.”

S] The last time we spoke was when Nature Nurture came out and a lot has changed for you since then.  What was the process for you moving forward from Nature Nurture to now?

Mike] “’Nature Nurture’ came from what was nearly a real dark place. We were nearly victims of the music industry because obviously there’s not a lot of money going around and people aren’t as willing to throw money at a band anymore and SO Records came along and believed in us and made it possible for us to make a new record.”

Matt] “It was a weirdly tough time though which is weird because it’s quite a positive record. Like Mike said, when that was created we basically went on tour touring that for like a year and a half solid and I guess with Jim joining the band at the start of that process we just became the band that we always wanted to be through that year. So we had that record, Jim joined and we got flown off and toured the world. It was insane. We toured a lot, did a lot of driving, started to play everything heavier and heavier, even the old songs that we were playing live, we just played heavier. And at the end of that process wrote ‘Eleven Eleven’ and I think that’s why it’s kind of heavier.”

S] You guys have done tiny shows and are now travelling the world. What advice would you have for a band coming out of Leeds that might be inspired by what you’ve achieved?

Mike] “I think a lot of it is down to Matt’s unwavering belief in the band. He’s been a massive driving force even when it might have seemed like the cards weren’t in our favour. You just have to have full belief to be able to put yourself out there and not be worried about setbacks.”

Matt] “Like Mike said, I think you’ve just got to want it and therefore do everything that you can to do it. We’ve sacrificed a lot for the band and to be able to do what we want to do, but that’s rad because we want to do it. You just have to figure out what you want and just aim for it and believe in yourself about doing it. Everybody’s from small places so if you need people to see you in a bigger place, get to the bigger place.”

Mike] “You get confronted with massive obstacles if you’re not one of those breakthrough bands who gets all the relevant leg ups in the industry when you need it.”

S] It’s all about if you’ve got the money to afford a decent press campaign and booking agent, it gives you a leg up. Some people can’t afford that.

Mike] “And it initially still takes the songs at the beginning.”

Matt] “People won’t get involved if the songs aren’t there. Another thing I would say is if you genuinely believe you’ve got something don’t rush it. Write the songs that you want to write that are the best you can write and then show them to people. Don’t feel pressured. Don’t take twenty years, but do what you want to do and do it properly.”

Mike] “Don’t jump at the first thing that comes along. Weigh out your opportunities. A lot of bands make the mistake of just going with the first person that believes in them like ‘Oh we’re in’ and then they’re sold down the river and that’s the end.”

S] What have been some big motivating factors in your career?

Mike] “It’s more than a fear of failure. It’s just a drive to succeed in something that you want to do. None of us want to be sitting in an office nine to five, pushing paper. There’s a lot of internal sacrifice, it’s not just emotional.”

S] Have your inspirations changed over the years or are you still inspired by the same people and things?

Matt] “It’s still the same people, we still get the same shows.”

Mike] “I guess it’s just built off a lot of our travelling experiences.”