For our latest interview we were able to talk to Douglas J. McCarthy of Nitzer Ebb fame about his solo album, ‘Kill Your Friends’, his influences, and his plans for 2013. 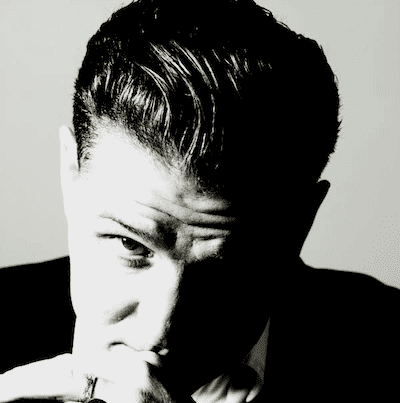 “It was a pretty emotional period of my life”

After performing and releasing several albums with EBM group, Nitzer Ebb over the past 20 years, Douglas J. McCarthy has returned to release a solo album titled ‘Kill Your Friends’. The album is available now and will be re-released on February 18 with exclusive bonus tracks on iTunes and Beatport. We talked with Douglas while in Los Angeles to discuss his solo album and the creative process behind it.

We start the interview by asking Douglas what he’s up to? “Just starting the day here in LA listening to ‘PM’ on Radio 4, doing this interview then off for a bike ride.” Nicely does it, Douglas. Good lad.

First, we wondered if the creative process has been different for ‘Kill Your Friends’ from the work Douglas does with Nitzer Ebb? “To a certain extent it has, in terms of what style of music I decided to work towards, but fundamentally, using electronic instruments and having me sing, there are similarities. It’s not the first time I have written both the music and vocals but the first time I have not had another person to look to when making creative decisions. Having said that, I worked on the music first and then introduced vocal ideas, which is very much the way the last Nitzer Ebb was created.”

Douglas explains the process of writing and recording while travelling with his wife and caring for family members. “To kick off the original ideas I worked a lot with Native Instruments’ Maschine and my laptop, which is a pretty portable setup, and lyrically I always make notes, either on paper or sing into my phone. It was a pretty emotional period of my life and there where many gestation periods with my thoughts only surfacing later.”

He continues describing core influences by explaining his experience travelling through India. “India was extremely cathartic. I found that it forced me to examine my own life’s issues, problems and sadness whilst constantly being confronted with millions of other people’s life. It was very soon after my dad’s death and I hadn’t seen my wife for a couple of weeks as she had been in Kathmandu with Genesis P. Orridge. We met at Mumbai airport and took a flight south to start our train journeys north.”

When asked about working with producer Mark Bell (Felix Da Housecat, Doc Martin) on ‘Kill Your Friends’ Douglas clarifies something that can be quite confusing for fans of modern electronic sounds. “Ah, well, there are two Mark Bell’s. One is of LFO, the other is my producer and of Shaboom Records. My one is from Lancashire, the other from West Yorkshire. Both called Mark Bell, both make electronic dance. Funny old world isn’t it? To answer your question, it is great working with Mark!”

Douglas explains to us the inspirations and processes behind two differing tracks from the album, ‘The Last Time’ and ‘All Kinds Of Wrong’. He comments: “‘The Last Time’ was born of my desire to make an 80s-style b-boy type track, but more on the New Order and Cabaret Voltaire indie tip. Mark and I worked together on the music and grooves. We kept looking at each other and laughing at how much it was sounding like Malcolm McLaren. Brilliant! Vocally and lyrically I wanted it to sound a bit grim and emo. ‘All Kinds Of Wrong’ was something that I came up with on the Maschine. I wanted to get more than a hint of “trouble funk”, so obviously a total “go-go” feel which always makes me happy and has a sort of devilishness to it. Hence, I wanted the lyrics to be playful yet very simple, something to be a bit of a wind-up. Mark has worked a lot with Chaka Khan’s sister Taka Boom and sings backing vocals on a number of the ‘Kill Your Friends’ tracks including, and brilliantly so, on ‘All Kinds Of Wrong’. It was Mark’s idea to give it a Marvin Gaye ‘What’s Going On’ party feel.”

With the album having a dark title we asked Douglas what inspired it? “It’s a play on the saying ‘keep your friends close and your enemies closer’. My wife and I were having a fairly lighthearted conversation about a couple we know who are too dodgy to hang out with and came up with our own phrase ‘love your enemies, kill your friends’ and I shortened it.”

Douglas has said that the record represents a cross-section of his influences from childhood to now so we asked him to put together a “Frankenstein’s monster” for the album; head, arms, legs and other important aspects! “OK, let’s see. You might have to fill in the blanks, for the hair it’s got to be Johnny Cash, the ears, Killing Joke, the mouth Cabaret Voltaire, the arms, Iggy Pop,  fingers are Alvin Stardust, the legs have got to be Shakin’ Stevens, and the feet are funkadelic.”

We mention to Douglas that we’ve seen him play in York and noticed that he’s active and quite aggressive with some movements when performing live so naturally, we ask if there were any pre-stage rituals that he does to motivate himself for such a lively performance. “I practice my pointing. Other than that, whilst touring I tend to take it easy, mostly going for walks – went for a lovely walk around York actually. As you say, it’s pretty lively on stage and I kind of view that as my ‘work out’, also if I have a sore throat from sickness or a lot of gigs I tend to not talk much either.”

Next up, we speak to Douglas what inspires him outside of music? “I cook a lot to varying degrees of success but I absolutely love it. I am fortunate to have many friends who are artists who, along with my wife, keep me very engaged with the art world.”

As our interview with Douglas draws to a close we ask about his plans for the rest of the year. “I am going to get out and tour. I also have a few other projects that I want to continue with other artists. I’ve already recorded a track with King Britt and finished one with Kenneth James Gibson’s Reverse Commuter project. Shannon Funchess, Light Asylum, and I are talking about a collaboration and Nicole Kuperus from Adult, asked me to join her on a project.”