On a dreary Saturday at Leeds Festival in 2012 and after a storming set on the NME/Radio1 stage, we catch up with James Smith of UK dance-rock maestros Hadouken! to talk about genre-bending, returning to Leeds, the influence of ‘rave’, and new material. 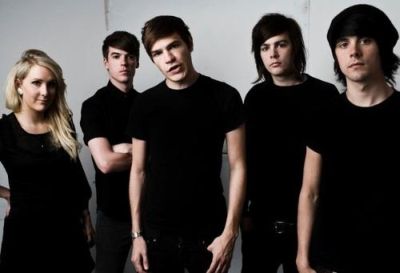 S] How’s Leeds Festival been so far for you?

James] “Yeah! It’s been epic. The weather held out for us as well, and it’s just good to be back up here really.”

S] What are your plans immediately following Leeds Festival this year?

J] “Well, we’re going to stick around and watch a few bands and enjoy ourselves. Tonight, we’ll be camping over and then we’ll head back tomorrow to have a good time!”

S] You’ve got a lot of history in Leeds, so, outside of the festival what do you enjoy most about it?

J] “I think Leeds has a great music scene, and that’s pretty obvious to anyone that’s into music. There are so many good venues. It’s a very student-y town – you can have a lot of good times here as a student – there’s just a really nice vibe here.”

S] You’re championed by rock DJs and electronic ones as well; how do you feel about mixing genres up?

J] “We don’t really think about it that much, but certainly we straddle the dance music scene and the rock music scene; we try to bring out the best of both worlds. We have the bass and beats of dance music and then rock vocals and lyrics with those kind of structures as well. We’ve always enjoyed having our feet in both camps.”

S] How do you approach a remix when you’re asked to do one?

J] “I do a lot of the remixes for our band, and what I really enjoy is sitting down with someone else’s song, and normally, if it’s a good track, then all the best bits are there already, so it’s a lot of fun for me, and a great learning process to chop and change things, and then structure it in a different way.”

S] Over the last few years you’ve developed a really solid reputation around Europe; we saw you in Hungary at Sziget Festival in 2011 – how do you feel about that acclaim?

J] “Oh yeah, man! It’s been really positive and we love Hungary! We actually played there again this year at VOLT Festival and we had a great crowd. It’s really very cool over in those places because there it’s all about ‘word of mouth’ and the reputation that brings you rather than the hype thing that’s always needed with press and blogs. Over there in places like Hungary if you play a good show then you’re guaranteed to have a bigger crowd next time. In Hungary we’ve been really blessed to go out there and play a few great festivals!”

S] Are you working on new material right now?

J] Absolutely! We’re about 80 per cent into the new album and when we’ve got that all finished and mastered, we’ll be releasing it early next year! We’ve had a few singles from that out which have had a lot of support – ‘Parasite’ and ‘Bad Signal’ are the first two. There’s lots to look forward to!”

S] You’ve got some really emotive tracks and some club bangers in your back-catalogue. How will this next record take you forward in terms of themes and ideas?

J] “Hopefully, we will be able to get bits of both styles in there! We like to do a bit of singing now and have that vector of loud and quiet; we have the big breakdowns with epic and euphoric vocals and then do these really heavy bangin’ drops as well. Again, hopefully the new record will combine the best elements of both electronic and rock music.”

S] Are there any bands crossing genres like yourselves that you are fans of right now?

J] “I think one that does it very well is Enter Shikari. I think we share a lot of fans with them! There’s a new band called Proxies who are combining electronics with rock sensibilities and they are really tight at the moment. Obviously, you have these legends like The Prodigy and Pendulum and stuff like that. We look up to them and respect them a lot!”

S] As a band that’s camping this weekend, what are your festival tips?

S] If you could come up with a Frankenstein’s monster for the Hadouken sound, what would it be made up of?

J] “Probably the body of Prodigy, the arms and guitar playing skills of Rage Against The Machine, the beats and the legs of Pendulum and the balls of the Foo Fighters!”

S] What inspires Hadouken! as a band?

J] “We’re very much into that ‘rave’ sensibility and the idea of coming together under one roof, and losing yourself in the moment and the music, that’s definitely the overall inspiration for what we do.”

S] Are there any films that inspire you?

J] “There’s a film called ‘Human Traffic‘ and more obviously there’s ‘Trainspotting’ as well. A lot of ’90s British movies that were based around that whole idea of ‘rave culture’ inspire us.”

S] If you guys could rip out the soundtrack to any film and replace it with the Hadouken! sound which film would you pick?

J] “I would love to have done ‘Tron’ actually. I know Daft Punk did a soundtrack that probably could never be bettered, but certainly that one.”

J] “I’d like a shotgun like the protagonists in all of the George A. Romero’s ‘Dawn Of The Dead’ movies!”